The Semipalmated Sandpiper is so named because it has webbing between one but not all toes. This is a very small little bird measuring about six inches. However, its wing span in flight is more than double that at 14 inches. It is very difficult to see on the shoreline because of its natural coloring. It is only when it flits around from place to place, that I spotted them. 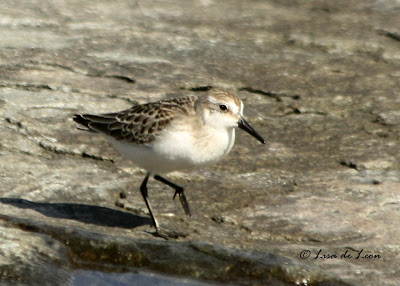 I found these sandpipers in Flatrock, NL with a group of Semipalmated Plover in early September. Newfoundland is a common migratory path for these little birds and they are often spotted here. 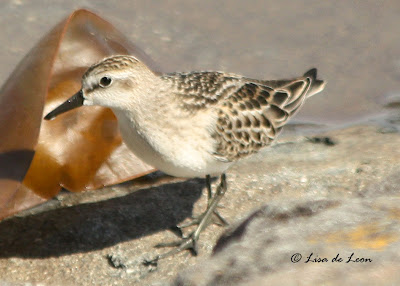 You may notice that in every picture, this bird is in motion. It just would not stay still. I learned a valuable lesson that the correct camera settings for one bird are not necessarily the best for another bird, even when in the same location. 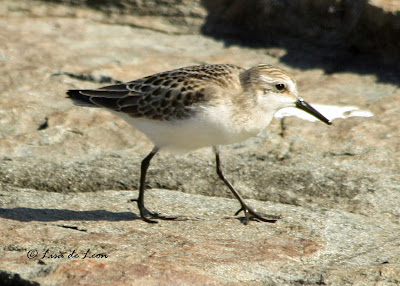 The Semipalmated Sandpiper is a much more difficult bird to photograph than the plover. It moved faster and had less contrast in its coloring. Of the many pictures that I took, these are the only ones that are somewhat clear. The birds tended to move away from me every time I approached. The Semipalmated Plover, on the other hand, became comfortable with my presence. This picture shows the webbing between the first two toes. 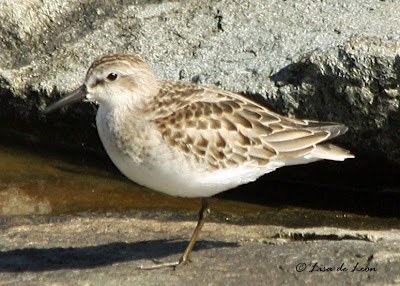 I won't get another chance to photograph them this year so I thought I should post what I have for now. There seemed to be less shorebirds this year for some reason. When the ponds are low, many will come inland to forage the pond's edge. This didn't happen much this year, maybe because we had so much rain that there were no dry margins around the ponds.
Posted by Lisa de Leon at 11:11 AM