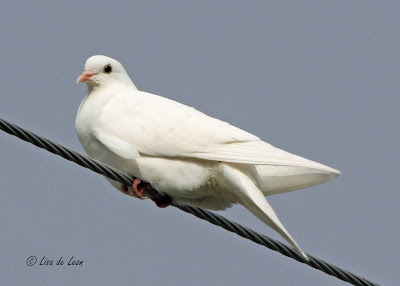 On August 7, I had a brief visit from a White Dove.  It was sitting on the power line with three regularly visiting Rock Pigeons. This dove was smaller than the pigeons and had a very different eye and eye-ring. A quick Internet check informed me that there are red-eyed and dark-eyed white doves.  Of course, all are domestic. 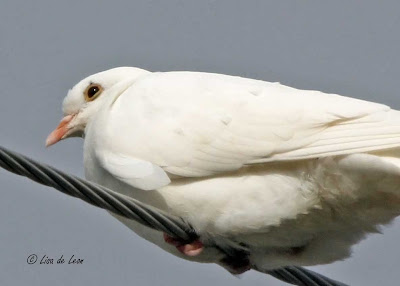 The dark eye of this dove was surrounded by a large beige eye-ring. Where did this dove come from?  Les Sweetapple reported attending a wedding sometime back when White Doves were released in Bowring Park. He thought they may have been owned by someone in the Carbonear area.  I searched for information about white dove releases in the province and couldn't find anything.  There are some companies in Nova Scotia and New Brunswick who indicate they will provide doves to the province.  It is assumed when these birds are released, they will return to their home. There was no leg band on this bird. 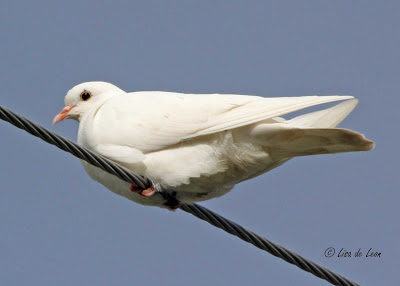 My Internet search turned up an interesting blog/business called Atlantic Sky based in Goulds.  The breeding service once offered at this business is no longer in operation. The blog demonstrates an amazing attachment to the many birds. It might be good to know that if a Ringed-neck Dove shows up, it may have originated in Goulds.
http://atlanticskyaviary.wordpress.com/about/ 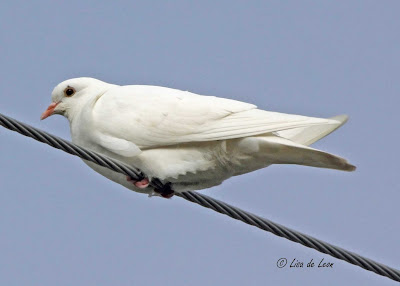 Rare birds on the Avalon continue to be elusive.  The few that have shown up around Biscay Bay, St. Vincent's and the Burin Peninsula, have vexed me as my efforts to see the Yellow-crowned Night Heron and the Royal Tern have left me empty-handed.  I keep going out, holding my breath, hoping to see something really special. If that is going to happen, the on-set of migration means that the next four to six weeks may bring the best opportunities.﻿
Posted by Lisa de Leon at 7:53 AM