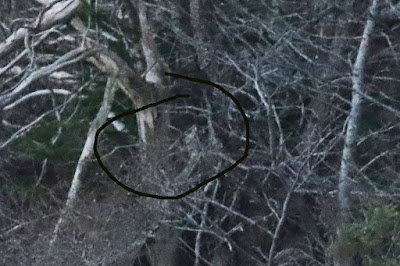 The one that got away happened even before daybreak. In the dark a pale brown, medium-size bird flew across the road in front of me. My camera was in my bag from the day before, so I scrambled with my binoculars to try to get a look. Just as I was settling on the bird on the branch, some helpful moose hunters pulled up in between me and the bird to ask if I was alright. With mixed feelings of knowing there is someone looking out for me and a bird that got away, I told them I was fine. After they left, I pulled out my camera and shot in the direction I last saw the bird. Much to my surprise, I found a bird sitting on the branch in my one and only shot. Still don't know what it is! 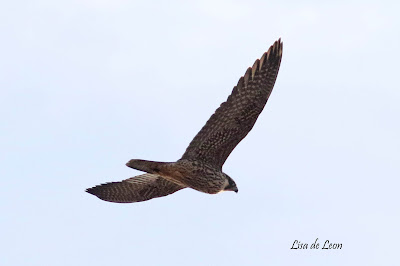 I made several stops on my way to Cape Race to see the Grasshopper Sparrow. It was around 9:45 when I arrived. Wow! What a difference a paved/semi-paved road made. Such an easy trip! When I arrived, Cliff knew right where the sparrow was. He flushed it out of the blind, and it flew into the field below. As I tramped through the dry, multi-coloured ground cover, I came to realize the bird was the same colour as the ground, and I was not going to find it. While looking, this grand Peregrine Falcon flew in so close over my head, I couldn't get a picture until it moved farther away. Well, I thought, that cinched it... the sparrow was not going to come out with that guy around. I moved on. 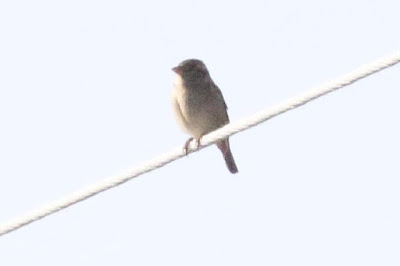 I stopped again along the way. When leaving Trepassey after a quick look at the beach, I saw this bird sitting on a wire. Shooting back over my shoulder into the light and all of a sudden surrounded by cars, these were the best shots I got. 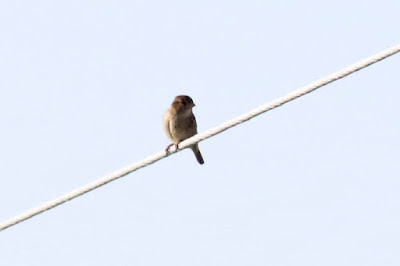 Looking them over, I guess it is a House Sparrow. I didn't see any others around, but this one stuck pretty close to the starling moving about the area. 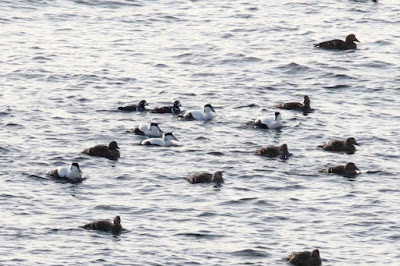 On to St. Shott's... With Harlequin Duck on my mind, I was surprised to see the many Common Eider sitting in the glare just below the point. The light made it very difficult to pick out detail on the mass of birds, so I began shooting all across the flock in the hopes of catching a Harlequin Duck. 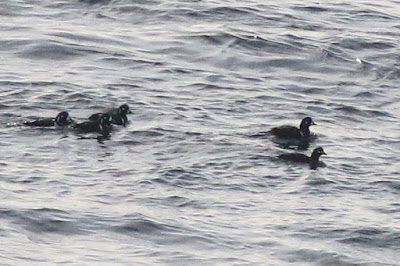 After checking out the cabbage patch, I returned to the point to look again. It was at that time I caught sight of five Harlequin. I thought that was all there were. However, when I scanned my pictures I have one shot where there are six males. Best guess now is there were a total of eight Harlequin Ducks. 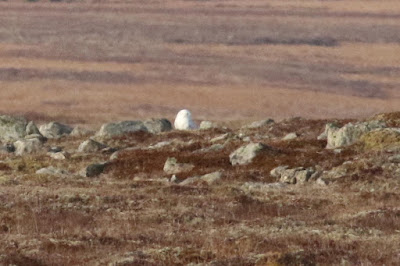 On the drive out of St. Shott's, the light was perfect to reflect a bright white object sitting atop a mound. Had to pull over to have a look. Sure enough, it was a Snowy Owl. Nice. 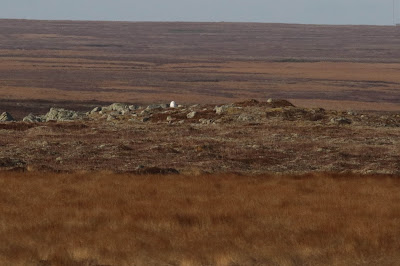 Just to show how obscure this bird can be or not be, this is the shot of white gleaming in the distance. Always worth checking out.
Posted by Lisa de Leon at 8:51 AM No comments: