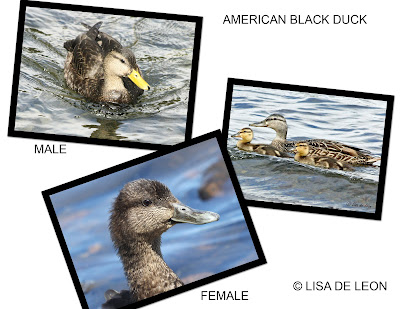 I actually started out this morning to focus on duck beaks, but somewhere along the way, I got sidetracked. 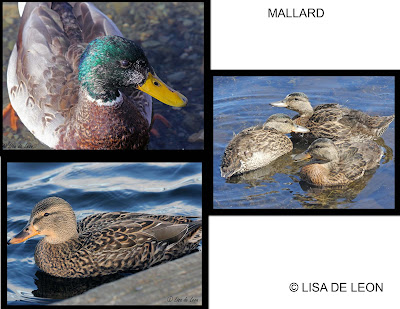 I think it was that I just got caught up in how many different kinds of ducks we are able to see here and just how amazingly colorful and striking they are. In the meantime, it is good to note from these pictures the difference between the beaks of the American Black Duck and the Mallard. These are ducks we see in every pond and stream. Sometimes it is easy to confuse the female mallard with the male and female Black Duck.  The images in these two sets show a striking difference between the beaks of each species. 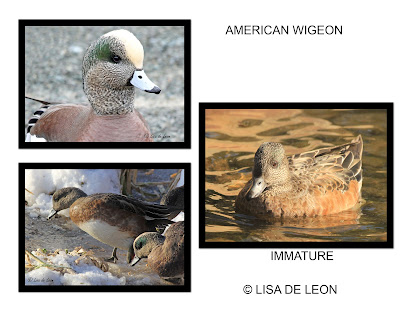 American Wigeons and Eurasian Wigeons are also a mainstay in St. John's throughout the winter and early spring. Their beaks seem to be be exactly alike as is their overall body shape. However, there is no mistaking their different colors. In the American Wigeon plate, I have included a picture of what appears to be an immature American Wigeon. This juvenile bird resembles the female; however, there are signs of green appearing on the head. That made me wonder if these wigeons may have bred here. Probably not. I read that wigeons reach reproductive maturity at one year but may not molt into full adult plumage at that time. 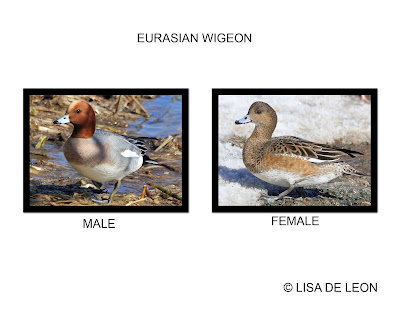 These wigeons have been moving around during the winter from Long Pond to Burton's Pond to Mundy Pond and to Kent's Pond. I have also seen one or two show up at QV Lake. They definitely follow the food. Two days ago, I counted a mixed flock of 17 on Kent's Pond. 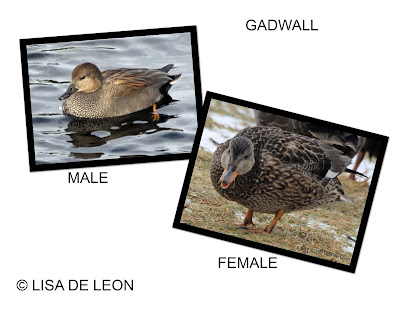 The Gadwall is not a bird we see often, but this year we were treated to one female Gadwall staying around all winter. The female can very easily get lost among a flock of Black Ducks and Mallards. It is indeed the beak of the female Gadwall that helps to differentiate it from the others. Note the male Gadwall does not have the distinctive beak coloring of the female. In fact, there seems to be very little similarity between these two birds. 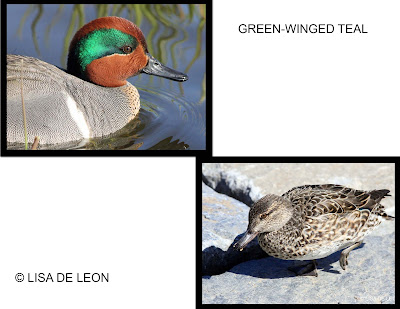 The Green-winged Teal flock that often inhabits Kelly's Brook provides a sure-fired sighting most any time. However, that is not the only place in town where they can be seen. More often than flocks, single birds can be seen at Virginia River, Bowring Park, QV Lake and Kent's Pond. Frequently, a small flock can be seen at Mundy Pond. I have a picture of an immature bird in the last photo plate in this post that I suspect is an immature Green-winged Teal. However, its beak seems to be bigger than these shown here. Yet another puzzle! 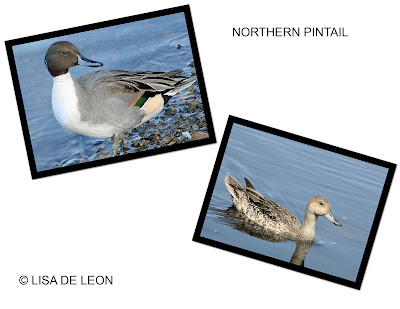 One of the most striking ducks that is a year-round resident of St. John's is the Northern Pintail. For me, it is almost impossible to pass them by without stopping for just a moment, at least, to admire their elegant shape and the stunning colors of the males. 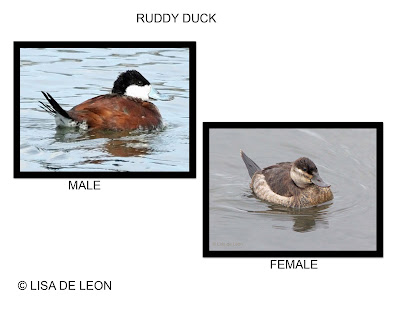 The Ruddy Duck is another of those birds we don't see all the time. However, every year, it seems one or two show up. The stunning, slightly upturned, blue beak of the male really sets it apart from the other ducks. 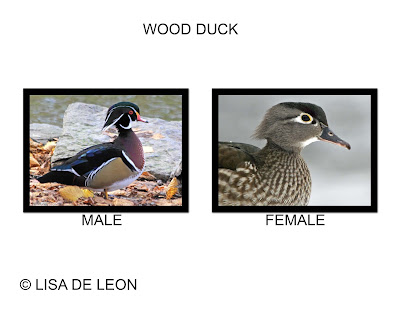 Each year for the last three years, we have had visits from Wood Ducks, both genders It is certainly easy to while away a lot of time looking at these very different and beautiful ducks. 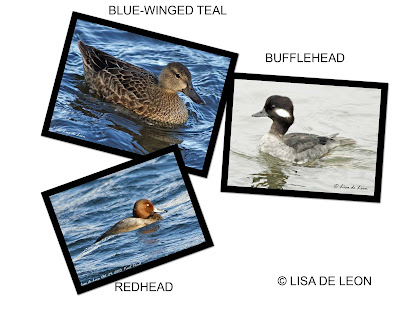 It really pays to stop and look at the ducks carefully. Most of the time, there is really nothing unusual among the flocks of common ducks we see all the time. Nevertheless, there are those unusual to rare moments when a second look can reveal a tiny Bufflehead or a non-descript female Blue-winged Teal. And.... if really lucky a closer look can ferret out a very rare duck like this Redhead! 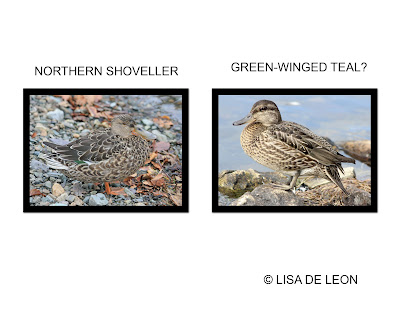 Getting back to my intended focus, no duck has a beak so large as the Northern Shoveller. It swims like it is front-loaded as it skims the water filtering for food. This late edition picture on the right is the duck I think is a teal. However, the beak gives me pause.

This short post actually showcases thirteen species of ducks I have seen on inland waters on the Avalon Peninsula. I really hadn't thought about how many there are, and I haven't even brought the black and white ducks to the discussion or other sea ducks like the Hooded Merganser or the Red-breasted Merganser that have been seen in fresh or brackish waters around St. John's.

My next post will look more closely at the  black and white diving ducks.

Note: It will help to click on any image to see enlarged versions.
Posted by Lisa de Leon at 1:21 PM