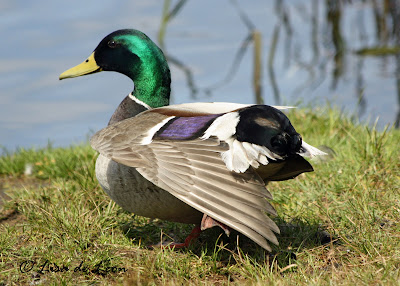 Everyone has seen a mallard, as they are prevalent across most of North America and other parts of the world. However, it is not all that common to find the perfect specimen such as this one. By the book it has all of the markings of a male Mallard, including the two perfectly curled up black tail feathers. 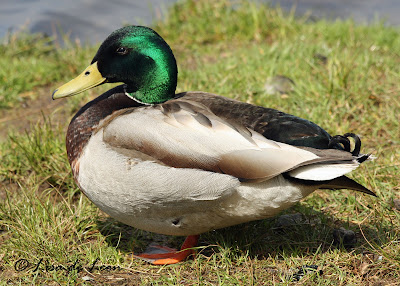 In many city ponds and lakes there are many Mallard hybrids. Their colors are not true because they are mixed with many other domestic ducks. They are pretty but do not have the pure markings of a Mallard, like this one.. 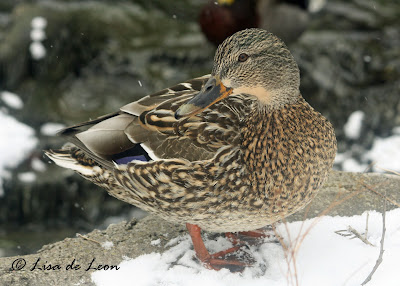 The female Mallard also has a very distinctive look, quite different from the American Black Duck. There is quite a lot of orange on the bill, a blue-violet spectrum and a tint of orange throughout its body. It gives it a very warm look on this cold, wintry day. 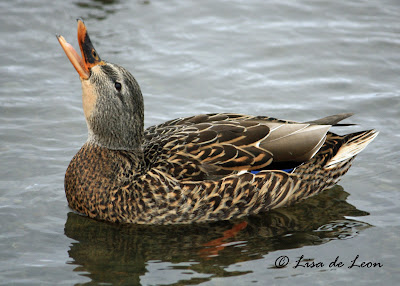 The female Mallard can also be quite vocal. Its quack starts high and loud and descends into a lower pitch and sound by the end of the call. Note the smooth brown wing feathers with a gentle white border. It is almost so perfect that it hardly looks real. 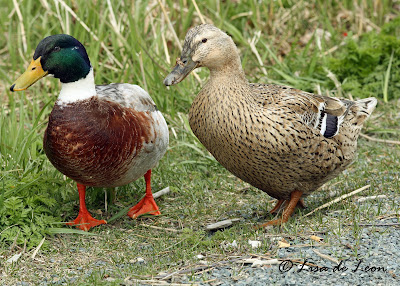 This pair of Mallards has teamed up from spring. The female of this pair seems to be larger than usual. Also, note that the bill doesn't not have the orange and the spectrum does not appear the true blue-violet. Is she a hybrid? There are so many variations among the Mallards that a whole photo collection could be developed and would never show all of the mixed markings.
Posted by Lisa de Leon at 2:31 PM