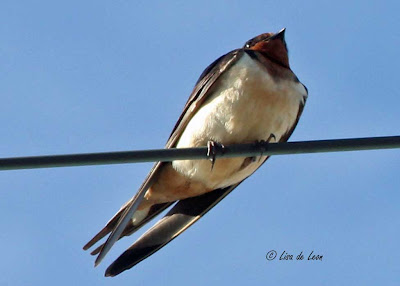 The Barn Swallow is one of the most strikingly pretty of all all of the swallows.  Its back is cobalt blue, and they have a rich chestnut color on their lower face, almost-neck, and chest. This color fades into a rusty color on their bellies.  The degree of the bright color varies from bird to bird and gender. 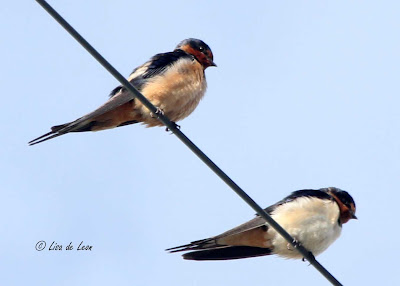 Apparently, the brighter the color, the healthier the bird is supposed to be. It is the male that has the most color on its underneath while  the female underparts are a light wash of  buff color. The female also has a more rusty forehead and neck instead of the deep chestnut color of the male.   The male also has a longer, more deeply forked tail than does the female. This picture clearly illustrates the difference. (The last three photos in this post also show the difference in length of the forked tail.) 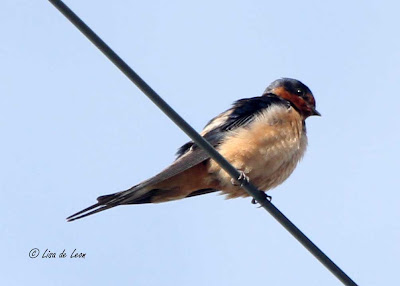 This male is very handsome and is sure to attract a female. The female of this species is known to pick her mate based on the brightness of his appearance.  The sad part of it is, she will move on to another if a more dashing male presents itself.   For the female, the mating game is never over.  As her chosen male fades during the season, she will pick another. 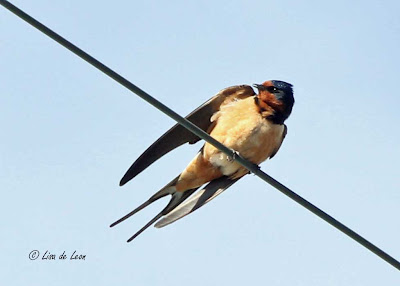 This male spent a lot of time preening and working to make himself the most handsome bird on the wire. 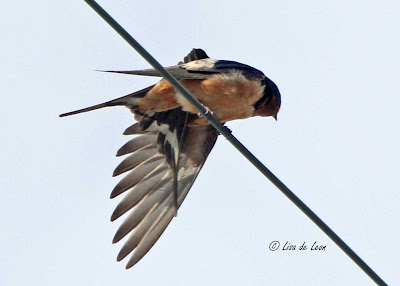 This shot shows the the male tail very well including the spots at the edges.  When I spent all of that time trying to catch a Barn Swallow in flight, I really didn't think I would get a chance such as this to really study its markings. 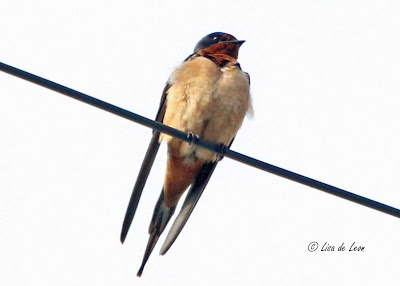 Barn Swallows do not visit feeders but have been known to visit yards with crushed egg shells and a mud supply, as their nests are built of mud. It takes more than a miracle to have nesting birds in a back yard. These two bits of information may be helpful to anyone attempting to lure a nesting pair into a yard. 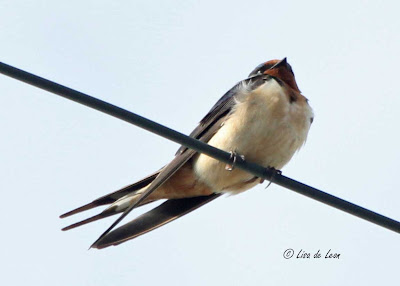 Swallows, like many other species, have very specific calendars of events. They tend to return to breeding grounds on the same day (with an allowance of a day or two) each year. The Cliff Swallows of Capistrano have been documented to return to San Juan, California every March 19th.  Unfortunately, when some renovations were done on the church, the swallows went elsewhere.  Workers there are now in the process of recreating a more natural habitat in the hopes of luring them back. 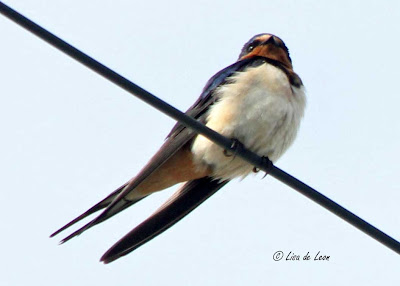 It seems that I am now progressing into a different phase of birdwatching enjoyment. Initially, I was "ahhing and oohing" over the variety and diversity of the many birds that visit Newfoundland.  From there, I became quite contented to be able to group my sightings by "family" classification, i.e. finches, warblers, thrushes, etc.. Then, it became important to me to identify the species of the bird, and now, in addition to all of the above, I want to know more about the gender, range and cycle of the birds. For me as a hobbyist, learning has been a low-impact, exciting experience that has naturally progressed and will obviously continue to just happen.﻿
Posted by Lisa de Leon at 10:02 AM