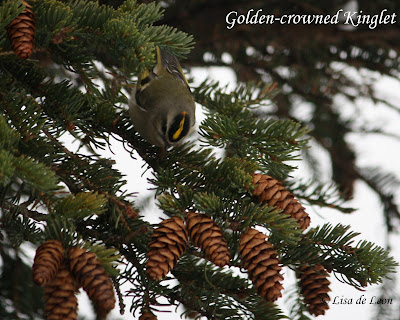 The Golden Crowned Kinglet is a dainty little bird of only ten cm in length. It is common to Newfoundland, and I have seen them through all seasons. The male as seen in this picture has a more golden stripe on its head than the female and juvenile. Their stripes are more yellow in color. 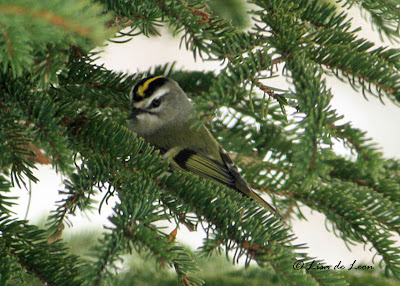 Golden Crowned Kinglets often flock with other species such as often woodpeckers, Brown Creepers, Chickadees or other birds. For this reason when I come upon kinglets, I stay quietly to see if other species are around. 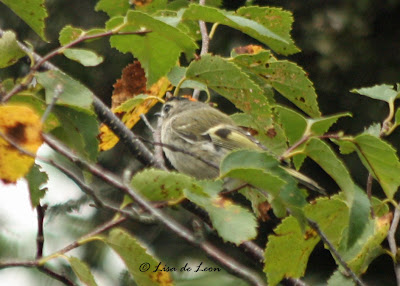 These birds are most often found in coniferous trees where they forage for insects. They will sometimes eat the seeds of the tree and drink the sap. They flit, seemingly constantly hopping from branch to branch. When they spot an insect, they tend to hover much like a hummingbird before making their grab. I included this shot, although not very good, because it shows how the crown turns deep orange during breeding season. 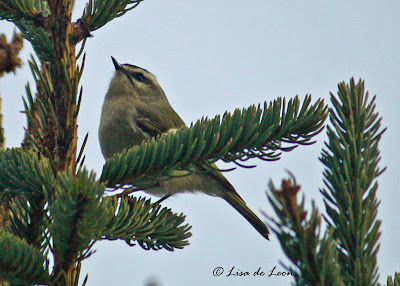 This image clearly shows the pointed beak that enables them to extract insects from within the bark of the tree. 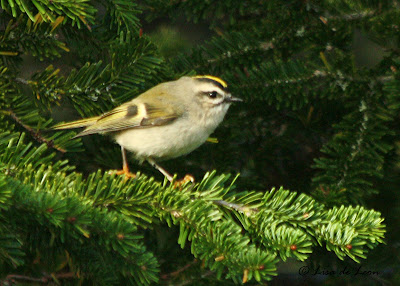 This shot is my latest acquisition. I was driving along Petty Harbour Road when I spotted a different, large brown bird sitting atop a branch protruding from a pond. I quickly stopped and walked back to the site. The unknown bird was gone, but the bonus was that this little female Golden Crowned Kinglet jumped out on a branch in the light for less than ten seconds. I was lucky to capture this shot, which is one of my best of this little species. 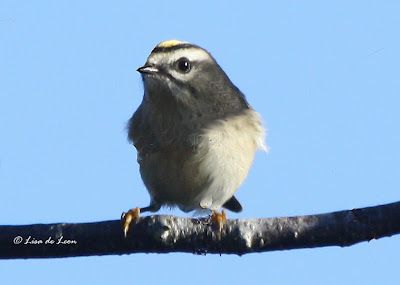 This image was taken in December 2010 and was so different from the ones above that I decided to add it to this posting.
Posted by Lisa de Leon at 8:56 AM