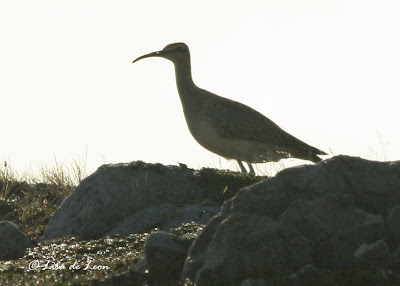 I saw my first Whimbrel on the Cape Race road in early September. We were standing on the side of the road viewing a Willow Ptarmigan when a group of four or five Whimbrel flew over. I only knew what they were because the guide called out their name. I quickly turned my camera on them and took two quick pictures before they were gone - in a blur. My pictures and my mind's eye were a blur. I was able to add the Whimbrel to my lists but I really didn't feel that I saw them. 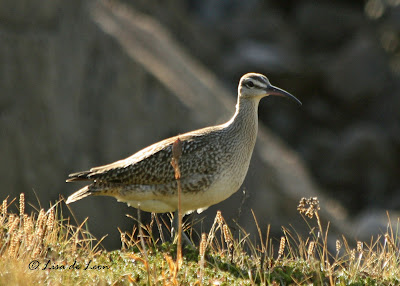 One week ago in Tilting, Fogo Island we went for a walk around Oliver's Cove. In the distance a silhouette appeared in the distance. Its outline was clearly a shorebird and I thought maybe it was a Wimbrel. I started shooting - one shutter click after another, as I inched closer and closer. The anatomy of my shooting of a bird is this: First I get any picture that I can, try really hard to hold my camera steady in the wind to reduce the blur. Second, I continue to move closer and shoot at every opportunity until the bird leaves or until I get the shot I want. In this second picture, I finally got a clear shot of the bird but I didn't have the light on my side, nor the eye in full focus. I kept shooting. 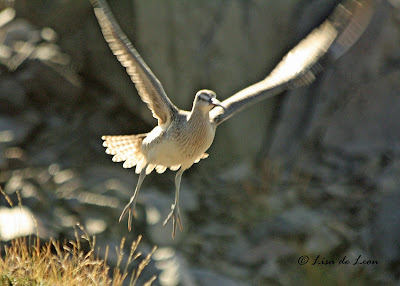 Just as I was getting closer and trying to fine tune my settings, this Whimbrel just lifted off. I didn't have my shutter set for the speed of flight, but I didn't know if this might be my last chance, so I kept shooting. 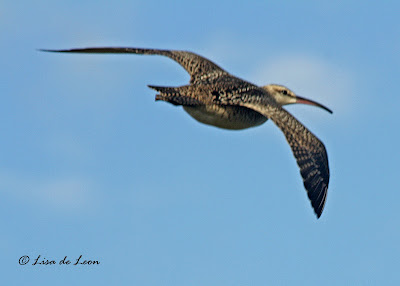 I was very pleased when he made a circle in front of me and decided to stay for a while longer. I made a note of how close I was to it before it flushed and made every effort to stay far enough away. 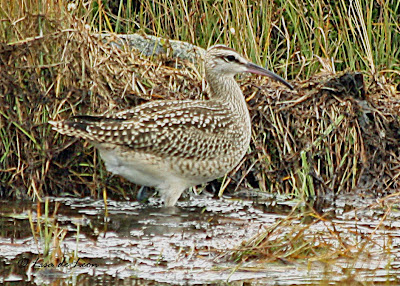 The bird landed and began to settle into its "bird behaviour," seeming more comfortable. As usual, the sun went in and my lighting was off. I now had some clear record shots and was pleased, but not satisfied. 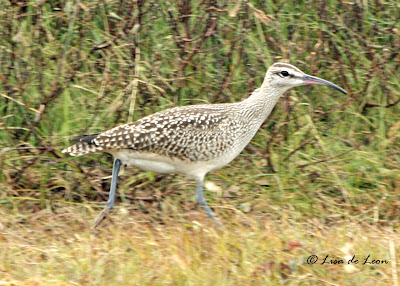 This Whimbrel was constantly on the move. It played havoc with my settings. If I set the shutter speed too high, then the lighting was insufficient. I tried to make the most of all the elements that I had to work with. 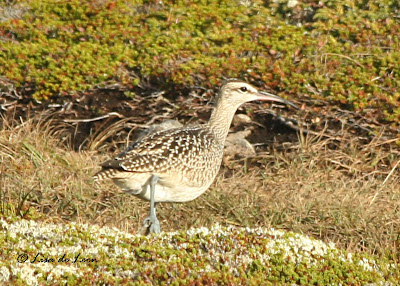 Finally, the sun came out, the bird was positioned right and so was I. I got several shots of the eye but all have a slight blur. However, my second opportunity to view and photograph a Wimbrel turned out much better than the one on Cape Race road.
All of this maneuvering took about 20 minutes, and that is short compared to some attempts to get a shot. I now have a much better understanding of the look and the behaviour of the Whimbrel. 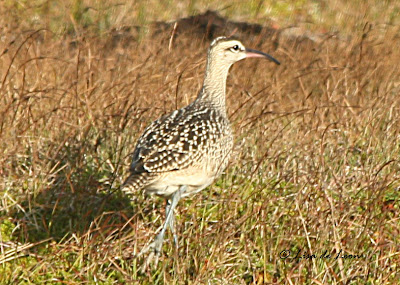 This Whimbrel was feeding on the berries and insects along the coastal barrens, likely preparing for its Fall migration. Over the weeks to come the Whimbrels will likely travel 4000 km to their wintering grounds in South America. 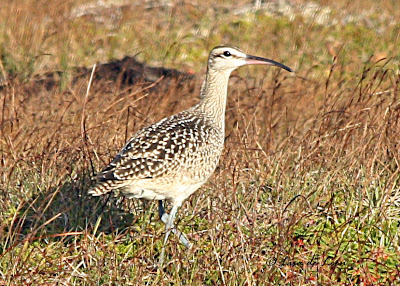 I was very lucky to encounter this, one of the largest shorebirds, this late in the season. Notice the movement of his feet in every shot. It seems really anxious to move on.
Posted by Lisa de Leon at 9:34 AM