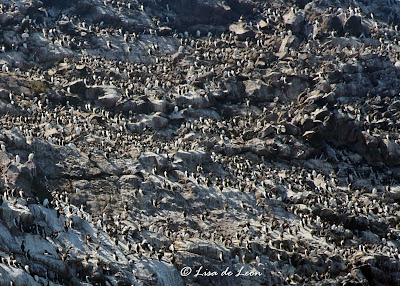 The most remarkable thing about the 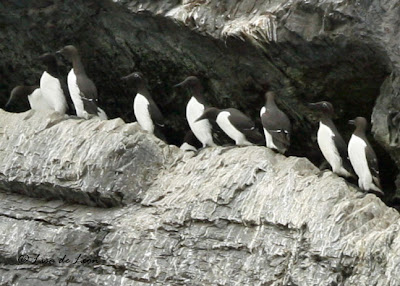 breeding grounds in Witless Bay, Newfoundland is the astonishing number of Murre, Razorbills and Kitiwake that return here each year. The sight, the sounds and the smell of this area are indelibly printed in my memory. Once I got over the masses of birds, I tried to focus in on some separate groups more closely.
In this picture there are examples of Common Murres that have the white eye-ring and white line extending from the eye and Common Murre that do not have this feature. I don't know 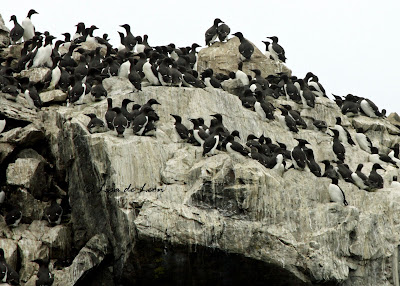 what some have this and some don't. Apparently, more Common Murre on the East Coast have the white line while less on the West Coast do.  In this fairly close-up images, it is easy to see just how tightly packed these birds are on each shelf of the island.
The egg of the Common Murre is pear shaped rather than round so that if it is moved it will not roll off the rock but will rather rotate in a circle. 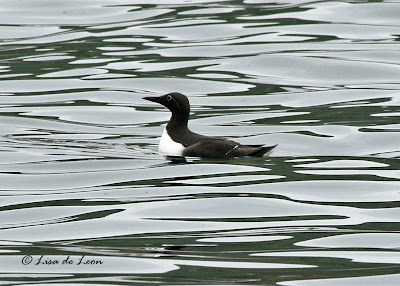 As we were leaving the island, I came across this lone Common Murre who probably just needed some "alone time." Remarkably, Common Murre can dive up to 73 meters. That is deep!