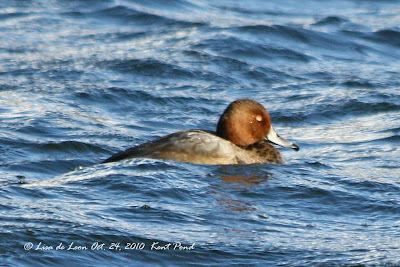 Surprise! Surprise! Just when you least expect it, a rare bird appears! This is my first rare bird find and now I wish that I had more pictures.

On Saturday, last, when I was working to get some better shots of the Pied-billed Grebe, I noticed this red headed duck drifting among the other diving ducks. I was hidden away behind some trees, lying in wait for the grebe to come near. It never did but a group of scaup, Tufted Ducks and this sleepy Redhead Duck drifted fairly close to shore where I was standing. 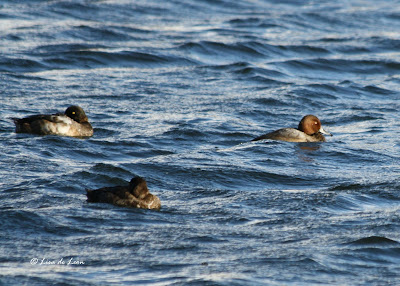 At the time, I didn't have my binoculars with me so I wasn't sure if it might be a Green-winged Teal or a Eurasian Wigeon. When I downloaded the pictures and looked closely, I realized that it wasn't either of those kinds of ducks. I thought it might be a Redhead Duck, but I certainly wasn't sure. Yesterday, I sent it to Dave Brown for identification. When I ran into him today, I asked about the picture and he reported that he hadn't received the e-mail. I wonder where I sent that! Anyway, I resent it to Dave today, and he just confirmed that this is, indeed, a Redhead Duck. He also provided this information. The last report of a Redhead in Newfoundland that he is aware of was in 2005 when there was a group of 10 to 12 in St. John's. Prior to that, the only other reports that he knows of was one in 1995.  This bird is typically found in the west and seldom found in the Northeast.  How does it feel to be the finder of a rare bird? Absolutely terrific!
Posted by Lisa de Leon at 6:45 PM