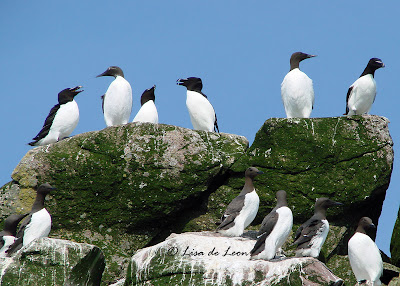 Great Island off of Witless Bay, Newfoundland is home to thousands and thousands of Razorbills, Common Murre and Kitiwake during their breeding season. All accounts suggest that the Thick-billed Murre should also be on this rock, but after searching through my images I couldn't find one.
Perched on this rock are several Razorbills and Common Murre. 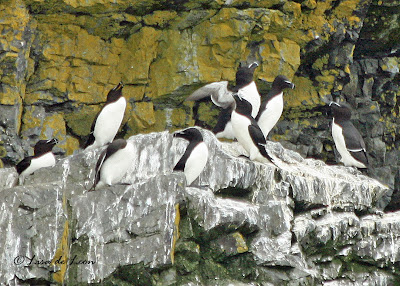 The Razorbill resembles the extinct Great Auk, except it is much smaller. Its head is large and heavy with its large black bill.

The large bill has a white line that runs from the tip of the bill to the eye and the bill tip has a vertical white line near the tip. Among all of the birds on the island, my guess is that the Razorbills make up about 10 to 15 per cent of the population.
Posted by Lisa de Leon at 4:51 PM