The Bridge between Winter and Spring 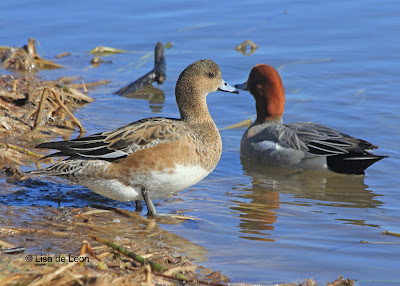 During one of those spring-like days in early March, I got out to enjoy the warmth of the sun and of course, some birds as well. This pair of Eurasian Wigeons was very contented mixing with the other ducks at Kent's Pond. 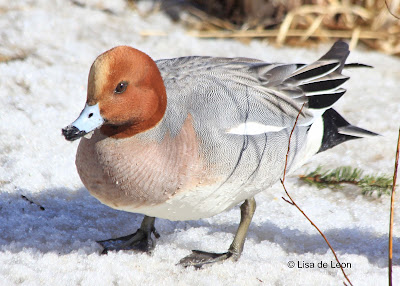 Their colors seemed richer, probably made to seem so by the brilliant sun-of-the-day. 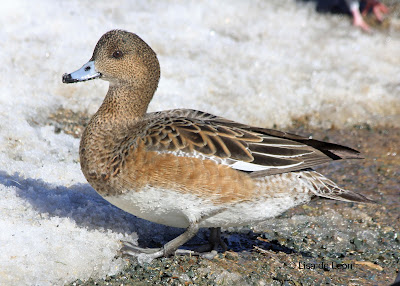 The warm browns of the female were also quite evident. While watching this couple, I began to wonder about how much longer the wigeons will be around. That in turn led to questions about what will show up next on our radar. 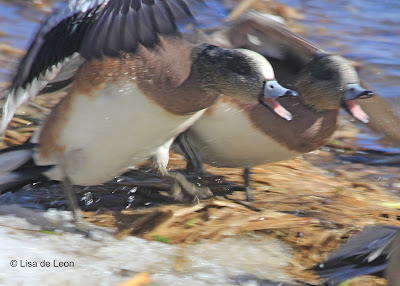 This peaceful scene was totally disrupted by a couple of raucous American Wigeons that flew in and began to torment the male Eurasian. They were relentless, sometimes doubling up on him and sometimes going after him, one by one. What was up with these two? 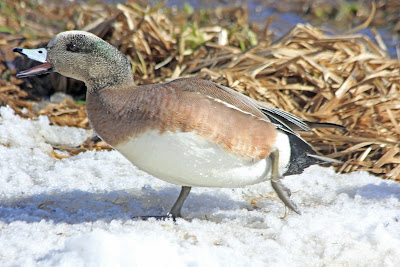 The days of enjoying our winter ducks and gulls are growing short, and we can expect to see a population turnover soon. The Iceland and Black-headed Gulls seem to already be drifting away. It looks like the Black-headed Gulls, once they have completely transitioned into breeding plumage, move on. It is likely the Pink-footed Goose will lift off some time in April, as well.
However, we will not be "birdless!" In April we can expect to see the return of the Osprey, the American Bittern, and winnowing Wilson's Snipe. The White-throated Sparrows, Fox Sparrows and Savannah's will join the over-wintering Song Sparrows to fill the woods with the sweet sound we have all been missing.

The Ring-billed Gulls will return en masse, as will the Northern Gannet, murres and Common Terns (maybe even a few Arctic Terns.) The Ruffed Grouse will start drumming and a sprinkling of Greater Yellowlegs will begin to appear, way ahead of the other shorebirds. Hopefully, our feeders will fill up with Purple Finch, Pine Siskins and bright yellow American Goldfinch. The first of the warblers we are like to see will be the Yellow-rumped Warblers. I know of one warbler that will be very happy about that.  We are on the edge of the return of the spring birds, and I can hardly wait. Now, all we need is some spring weather to go with it. Long-range forecasts suggest we may have a nice one.

P.S The American Tree Sparrow is still very active and easy to see at Caledonia Place.
Posted by Lisa de Leon at 3:52 PM