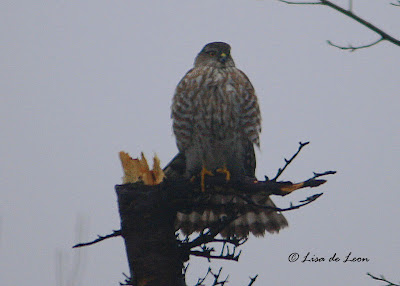 I have had at least four opportunities to get a picture of the Sharp-shinned Hawk. So far I have nothing to brag about. Raptors tend to stay high and far. I was able to get this shot of an immature Sharpie (nickname) from my kitchen window. He was far and I stretched the limits of my camera and my skills. 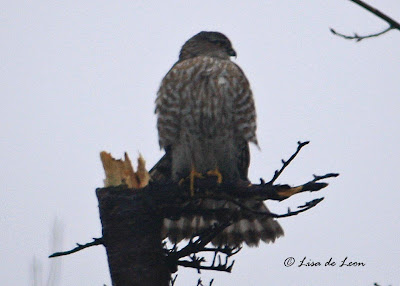 This image shows the powerful beak with the sharp nail that he uses when killing his prey. This kind of hawk eats small birds, rodents and insects as well as other creepy crawly things in the south. 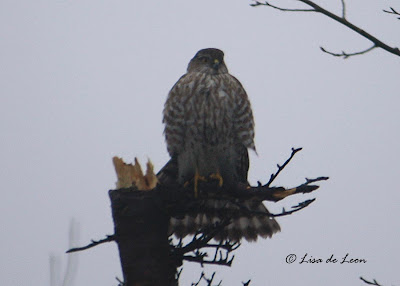 I watched and hoped that this young Sharp-shinned Hawk would return on a day when there was some sunshine. On this day is was pre-snow and the sky was particularly drab. 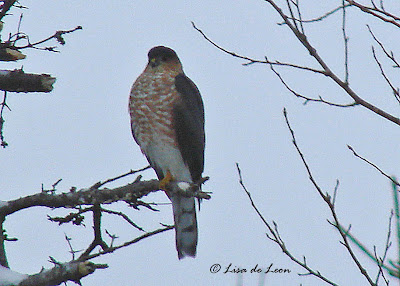 At yet another time an adult Sharp-shinned Hawk showed up in my neighbor. Once again I shot this image from the kitchen window. While it is somewhat better, it just doesn't measure up. 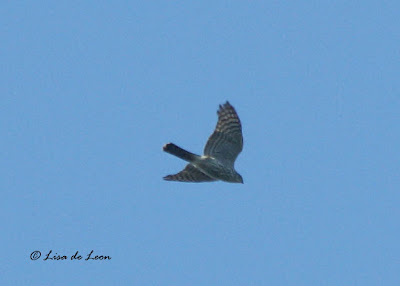 On another day when I was on a birding tour, this Sharpie flew overhead. I had no idea what it was but the guide shouted out "Sharpie," and I pointed my camera upward and started shooting.

I see quite a few raptors flying overhead on a regular basis. Soon, I will have to be patient enough to follow them and hope for a landing. If I get any better shots, I will upload them on this posting. 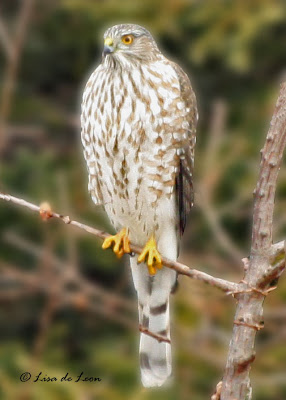 Photo added Jan. 3, 2011. While on a Christmas Bird Count, I had my best opportunity to photograph a Sharp-shinned Hawk. This is the outcome.
Posted by Lisa de Leon at 9:55 AM