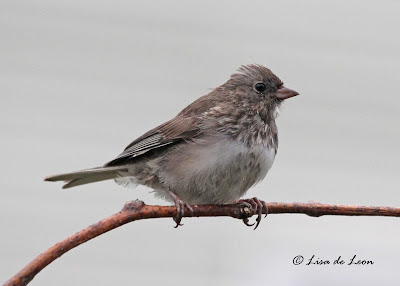 Over the last three years the most frequent visitor to my backyard feeders has been the Dark-eyed (Slate-colored) Junco. At times I have had flocks of 60 birds. This has given me a great opportunity to observe and learn the behaviour and the plumage transitions of this species.  During the summer the numbers of juncos visitors to my yard drop and are replaced by members of the finch family including Purple Finch, American Goldfinch and Pine Siskins. 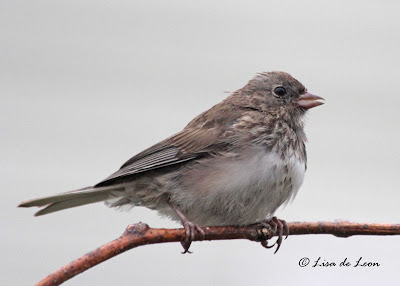 It was at the end of July when the juvenile Dark-eyed Juncos began to visit the yard for the first time. They look very different from the adult male and female birds but are easily and quickly identified by their distinct flesh colored beak and while outer tail feathers. It is interesting to note that this little juvenile has a "buffy"color on its side which bears some resemblance to the markings of the Dark-eyed (Oregon) Junco. 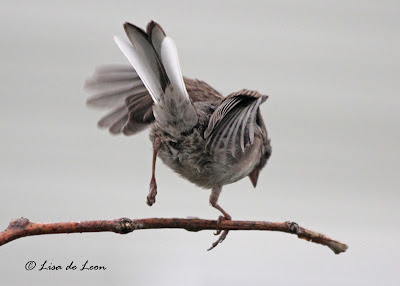 It was a joy to watch the young birds in the yard. This little junco was very awkward as it tried to hold fast to the branch during the high winds. It and others would stumble, struggle to get airborne and fall off the perch as it tried to maneuver a place at the feeder. It reminded me of a toddler who wants independence but will get a few hard knocks along the way. 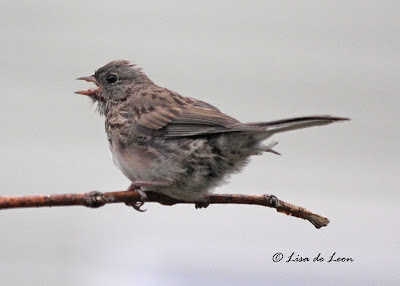 While free to move around at will, these little birds still like to be fed by their parents. I often watched as an adult bird would put seeds from the feeder directly in the mouth of the young.

I found it very interesting that the young of the species are less apt to stay among their own. The juncos would fly around and "play" with the A. Goldfinch, Purple Finch and Pine Siskins. They chased each other around the yard like old friends. I observed similar behaviour among a group of adult Dark-eyed Juncos yesterday that had a Ruby-crowned Kinglet among them. It, too, was chasing and mingling very nicely.

I read this week that many ground feeding birds have white outer tail feathers and that this is an adaptation over time. When one flees from danger, the white flashes boldly sending warning signals to the others birds around.  This must be particularly useful when the neighbor's cat hides under my giant Hostas. 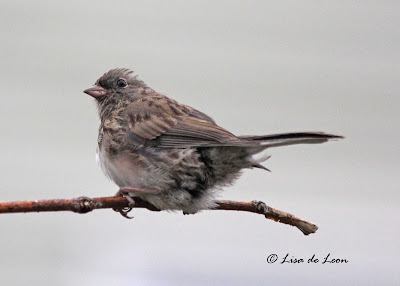 Since July the juvenile juncos have undergone several stages of change as they transition into their mature plumage. The warm browns, streaks and "buffy" colors are being replaced by dark gray and darker brown colors with a stand-out white belly. These birds are among a group of birds often referred to as Snowbirds and they will be around all winter. Just this week I noticed the flock in my yard is beginning to grow again as the numbers of finches diminish. I topped my my feeders with their favorite mix and welcome them home.
Posted by Lisa de Leon at 6:56 AM