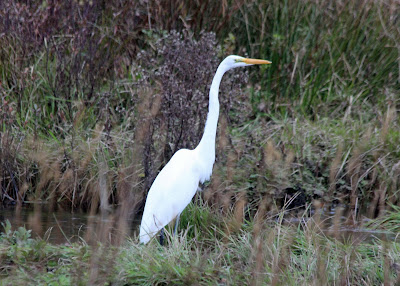 I set out this morning in search of the sun. I looked and looked and finally around 3 p.m. I caught sight of it shining on the Pippy Park Golf Course, for a moment only and then it was gone.

While out there on my sun quest, I decided to try to amass as many species as possible for my Winter List. I know of several special birds around town and I thought it would be nice to count them in the winter before they up and leave.

There wasn't much time really.  A full day now consists of only eight hours of day light and eight minutes of sun light. The rush was on! I was "speed birding" all around St. John's and vicinity.

I missed many of my target birds and did not tarry. If I didn't see the bird right away, I moved on. 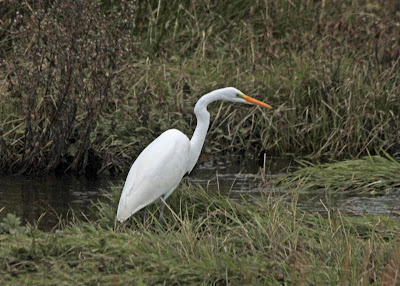 One of the target birds was the Great Egret that has been seen by many at Virginia Lake.  I scanned the water's edge and the trees but couldn't find it.  The picture provided here was taken about a month ago in Ferryland. I wonder if our city egret is still around.

I did start the day well with the Pied-billed Grebe that is still at Long Pond.  The rest of the day I checked out Cape Spear, Blackhead, Goulds: Second Pond, Fourth Pond, Forest Pond, Bidgood's Park, and Cochrane Pond Road. (The water is very high in all ponds.) At each stop I added at least one bird to the list.

The most fruitful location was on Blackhead Road near the house with the flag draped in the window.  There I got finches including American Goldfinch, Purple Finch and White-winged Crossbill. There were more than a dozen Blue Jays in this same area.

I also checked Rennie's Mill Road and got the House Sparrow and Song Sparrow. There were only three sparrows at the feeder. No sign of the Mourning Dove or the other two very desirable birds:  Blue-headed Vireo and Yellow-breasted Chat. A quick look at Quidi Vidi yielded very few birds on the water so I moved on. There were two Green-winged Teal at Kelly's Brook. Bidgood's Park offered up American Goldfinches, Boreal and Black-capped Chickadees.  I suspect that there are more birds there in the back of the park beyond the big rock by the stream but it was late in the day when I got there.

I checked out the Baltimore Orioles at the end of the day but they were not about.  I looked for the Northern Mockingbird but there was not one bird moving on Pinebud.  A quick look in Torbay didn't offer up anything near the beach but a few Herring Gulls, not even American Black Ducks in the mix. In Goulds I saw two huge, huge flocks of European Starlings.  I looked them over the best I could given the traffic and didn't see anything different.

All in all I had a very busy day that recorded 28 species.  Last year my Winter List tallied 85.  I wonder if I will be able to match that this year....  I will certainly try! Over the next day or so I will check the ponds in town including Mundy, Long, Kent, Kenny's and the Virginia River.

Please note that I have added a Winter List page developed from last year's Winter List compiled by Jared Clarke.  I will try to keep it updated over the next three months.  Who can contribute to the Winter Bird List?  Anyone who sees a bird in Newfoundland.  If it is an uncommon to rare bird, it is best to take a picture.  Found birds can be posted on the Google Group or submitted directly to Jared through e-mail.  An e-mail can be submitted to him through the Google Group, as well.

By the way... it is not possible to bird all of St. John's and area on a single winter's day!
Posted by Lisa de Leon at 6:00 PM