Rare Is All About Time and Place 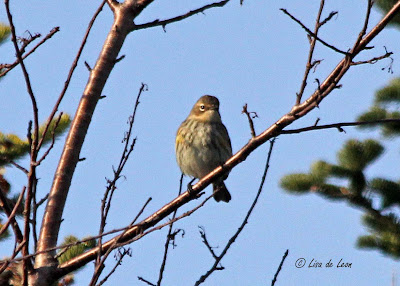 It wasn't too long ago when the Yellow-rumped Warbler was about the most common bird in the woods. Then the days and months on the calendar flip by and the common birds of summer are gone, all except a few that is. 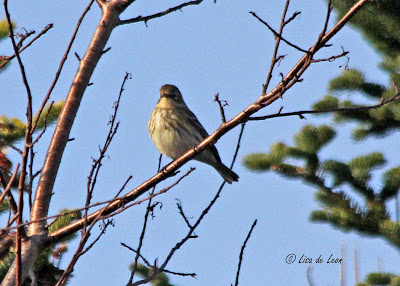 Three days ago I detoured from another trip into the road to Stick Pond.  When I turned the corner into the turnaround, there was a swarm of birds of so many species, lots of finches and both species of chickadees and more. It was like the Avalon Mall on discount day! 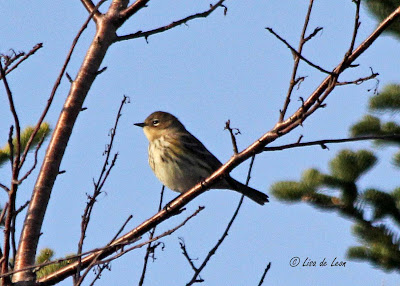 I could hardly contain myself until I could pull over with the sun behind me to watch all of the activity and check out the many species. Time dissolves like sugar in hot coffee when in this type of activity. I must have been sitting there close to half an hour when in flew a different bird. Moments like this are fleeting so it was the camera I grabbed first to get some shots to review later.  It was a Yellow-rumped Warbler and it only stayed about five minutes before it flew off into the unknown. 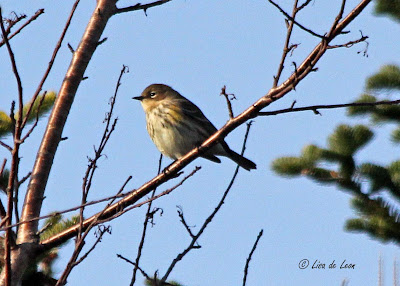 Once gone I checked my pictures and to my delight I confirmed that it was a YRW which is a rare sight at this time of the year.  As far as I know this is the second Yellow-rumped Warbler found int he St. John's area over the last ten days. The other was found by Jared Clarke at Kelly's Brook.

As I reflect on the species of birds that I have seen recently including the Northern Mockingbird, this YRW, the Snowy Owl, I just know that there are so many special birds out there that are not found. It is pure luck, happen chance and perhaps a little serendipity that brings a birder in contact with a special bird.

It strikes me as unusual that special birds like a Pine Warbler, Yellow-breasted Chat, Baltimore Oriole and a White-breasted Nuthatch land in the yards of birders.  How many more show up in yards of people who love looking at birds but have no idea how special it is to find one of these? If a cast net could be thrown over the island and all the rare birds here right now could be collected in one spot, I think it would be astounding.  In stead I think the vast majority of these rare birds will escape to warmer zones or succumb to the elements without their visit ever being recorded.

Every birder can expand this cast net by encouraging all of their contacts to watch for anything that flies and looks different to let them know.
Posted by Lisa de Leon at 7:44 AM