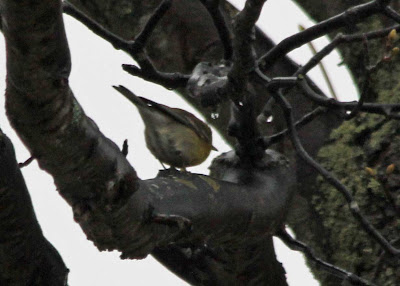 It's really not fit to be outdoors today but when is rain, drizzle and fog enough to keep a birder indoors.  I checked several spots today and found the area near Stick Pond to be very busy but I didn't see anything unusual. 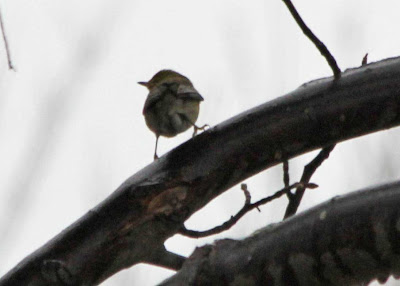 The intent was to head out to Cape Spear but before we (Margie and me) could leave town we checked several areas where the likelihood of seeing birds was high.  In the process we saw Purple Finches, American Goldfinches, House Sparrows, a Song Sparrow and the highlight of my day was to get a look at the Pine Warbler. 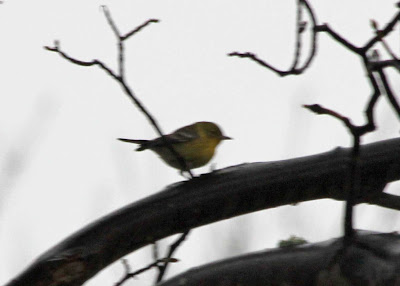 At first I could only see the rear of the bird and I was battling the natural darkness of the day, the tree cover and rain drops. I just kept shooting despite the conditions and the little Pine Warbler turned sideways.  I actually could see the bird much better than the pictures suggest. 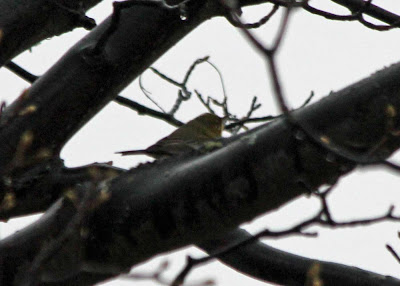 I called Margie to come but by the time she reached the area the bird was gone.  I didn't see it fly out of the tree and thought it had to be close by. We looked and looked and couldn't see it again.  That doesn't mean it wasn't there.  The back light was so harsh that it was impossible to see the red on the many male Purple Finches.  It was more like birding for silhouettes than anything else. 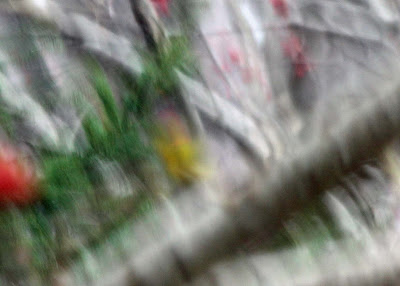 This was actually my second time to see the Pine Warbler but if I hadn't known the bird was in the area I would never have known what this three-second flash of yellow was as seen in this picture.  It was far, overcast and hidden behind numerous branches.  At least today I have recognizable record shots.  I would love to have to opportunity to see this bird in better light and for a longer time as it is a life bird for me.
Posted by Lisa de Leon at 4:15 PM