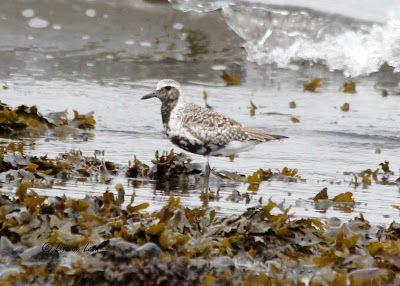 I have been procrastinating this post for quite some time because of the work I knew that would be involved with it. One of the most troublesome identifications that I struggled with this summer and fall was trying to see the differences between the Black-bellied Plover and the American Golden Plover. 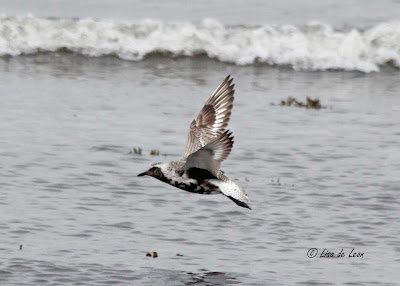 If the bird is accommodating, it is easy. The Black-bellied Plover has a black patch under its wing and a white rump. This is true in any season. 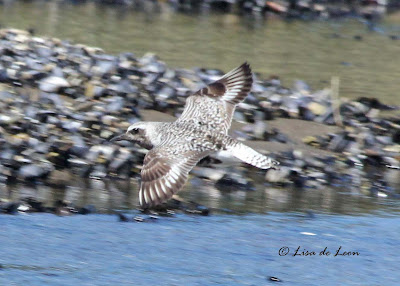 However, it could be a long wait in often challenging weather in order to see the bird in flight. 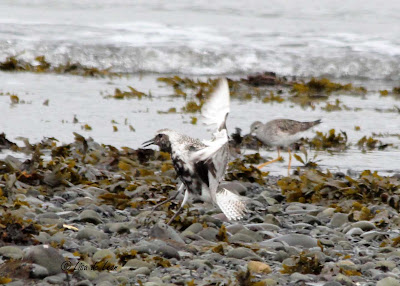 This means that I have had to spend some time studying the other identifiers on this bird that separate it from the American Golden Plover.  Study does not always lead to mastery as I have rendered the differences to memory but still cannot tell the difference in the field. 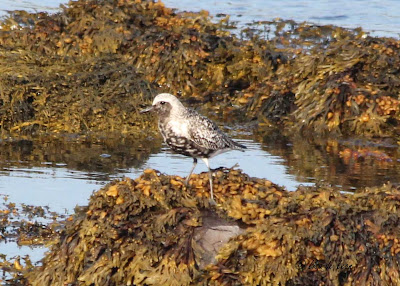 In full breeding plumage I think I could readily tell the difference but I have never seen either bird during that time.  These shots are about the closest that I have come to seeing the Black-bellied Plover in breeding plumage. I understand that the shorebirds come to our beaches and fields during migration after they have completed breeding elsewhere. So it is not likely that we are going to see the full color on these birds.  That makes it even more important for me to be able to tell the difference in their transitional plumage and distinct traits. 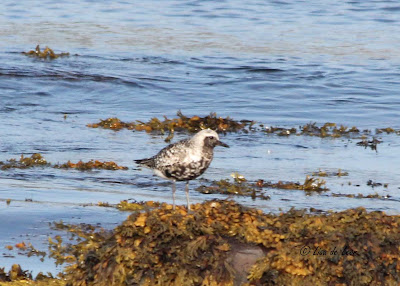 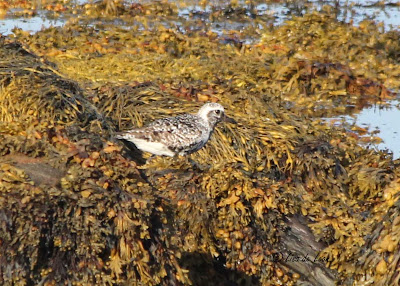 The Black-belled Plover is a relatively large, bulky shorebird.  It measures from 10.5" to 13.5". The three-inch variation can really make a difference when trying to make the ID. The American Golden Plover ranges from 9.5" to 11" in length. There is an overlap. 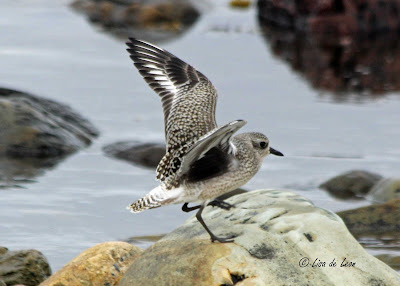 In the picture above the dark face creates an illusion that the bill is longer but there is no doubt that is is stout in structure. 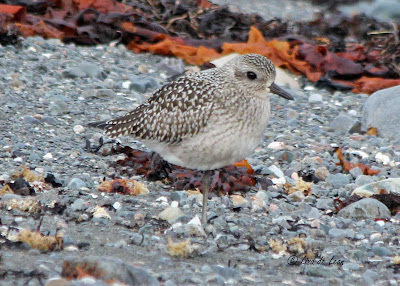 As the Black-bellied Plover changes into its winter plumage it loses all of its black plumage, except under its wing and becomes a rather non-descript gray. Its beak is short and stout. On the winter bird pictured above it still maintains the white rump and black wingpits. 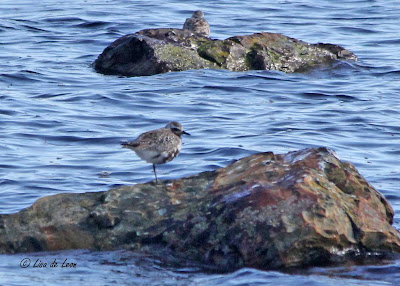 Here we go!  The American Golden Plover.  There was a report that there was a pair of both BB Plovers and AG Plovers in Renews.  I thought how wonderful, I will be able to see them together and learn the differences. I rustled through my pictures from a previous day and found this picture.  At the time I had dubbed it a Black-bellied. Now, I am beginning to wonder.

Here are the differences: The Black-bellied has a stouter bill, is larger with a larger head and thicker neck as well as some plumage differences. The American Golden Plover has a thinner bill, smaller body and the primaries extend beyond the tail.

Ok, this bird seems to have a slimmer bill. It looks small but, of course, I am shooting from quite a distance. The crown of the head seems darker than the BBP.  My best guess is that this is an American Golden Plover.

I travelled to Renews and saw four plovers moving around the beach.  Every now and then I would catch sight of the under wing patch and be sure of only the Black-bellied Plover.  I could not see any difference in the four birds and came away from that viewing pretty frustrated. 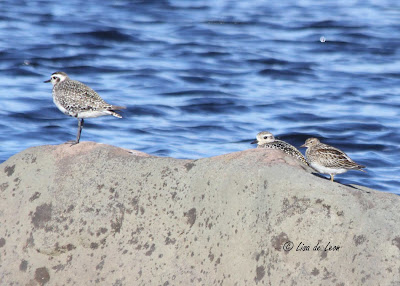 Then, came an opportunity to study the American Golden Plover closer to home.  A large flock was reported in a field in Goulds. I made at least a half-dozen trips over to find them.  I never did. 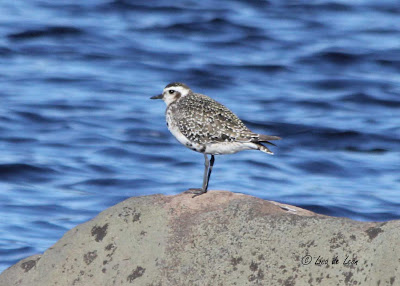 Then one day I dropped by Second Pond to check the variety of shorebirds that pop up there. Again, I found what I think is an American Golden Plover perched on a rock. It seemed small, the bill appears thin, I think the primaries extend beyond the tail, its crown is quite dark.  I can't tell if its neck is thinner than a Black-bellied but my best guess here is the AGP. There was no one around to confirm my guess. (There are often other birders milling about bird zones and their knowledge is very welcome.) 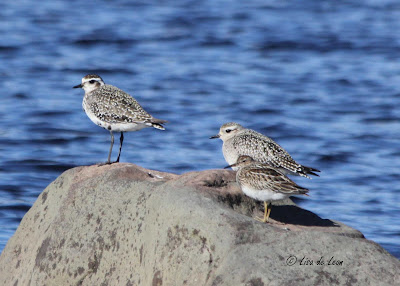 I watched with my binoculars and with my camera.  I wondered about the bird at the back of the rock. It finally moved closer behind the first bird. It was not only very satisfying to at least know that the other smaller bird was a Pectoral Sandpiper but it gives me a sense of size relativity. The Pectoral Sandpiper ranges from 7" to 8" in length.

While the two plovers don't look exactly the same in coloring and the plover in the back seems more stocky and larger than the front bird, I am thinking the bills are the same and both seems to have primaries that extend beyond the tail. Boy, am I confused! Is it possible that the plover in the back is a juvenile American Golden Plover? 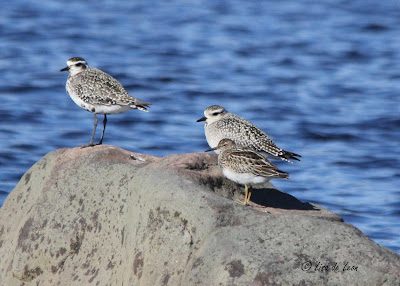 To get a closer look at these pictures, double-click on the image.  It helps to see them enlarged.   I found a helpful picture of the American Golden Plover in different stages at this link: http://www.paulnoll.com/Oregon/Birds/Likely/thumbs-Plover-American-Golden.html 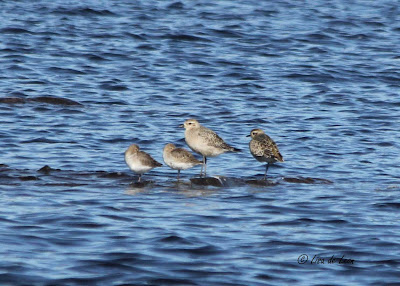 Now, to add even more confusion there were two plovers and two Dunlin sitting on a rock even further away.  Once again size is important.  The Dunlin ranges in size from 8" to 9" in length. The Black-bellied Plover can be up to 13.5" and the American Golden Plover can range from 9.5" to 11" in length.  On size alone. I think that there are two Dunlin standing next to the Black-bellied Plover with the American Golden Plover at the far right. 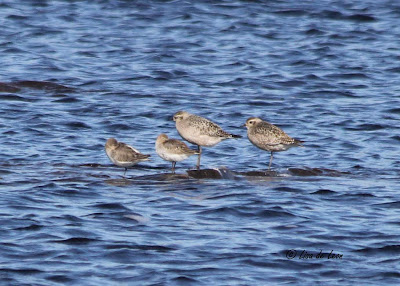 I feel pretty certain that the smaller plover is an American Golden but now, I wonder about the two on the first rock. This bird is much darker with a very distinct AGP pattern on its face. OMG! 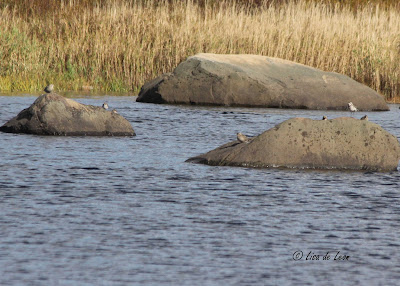 I don't think I am going to get this until I have a better opportunity to see both birds up close and together.  That may be a long time. Not only has the season passed, I have provided a picture of what I usually find when I am shorebird watching...  tiny little birds in a distance with their images strongly impacted by the light of the day.  Strangely enough in this picture I can identify at least two Dunlin, at least one American Golden Plover and possibly two. I think the Pectoral Sandpiper is one of the birds in the back and I cannot even make a guess on the larger bird on the left rock.

Do I know more than I did when I started this tangle?  Well, yes, a little.  If I were able to see the birds side-by-side again, I would do a quick check of size, beak, primary feather length, try to note a white rump or black wingpit if I can see the bird preening or in flight.  How far along am I in seeing the visual differences?  Maybe 3 out of a scale of 10.

Sometimes I really think that I should know more than I do.  But then again, I am sitting here with several North American field guides and some contain up to 700 North American Species. While there are considerably less species in Newfoundland, it is still a daunting task to learn so much about so many.
Posted by Lisa de Leon at 10:04 AM