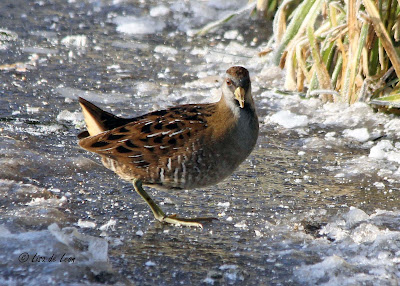 In the days of old before much study of bird behavior it was thought that the Sora (also known as the Carolina Rail) would bury itself in mud to ride out the winter. Well, here is living proof that the old belief was unfounded. This is not the first recorded visit of a Sora in St. John's.  Some years back it was thought that there were more than one at Lundrigan Marsh as they were heard whinnying in the area at night.  This is quite a secretive bird and moves around mostly at night.  The visibility of this bird is unusual.  While it prefers to eat mollusks and insects, it seemed very happy to eat the seeds offered up by passing walkers and visiting birders. 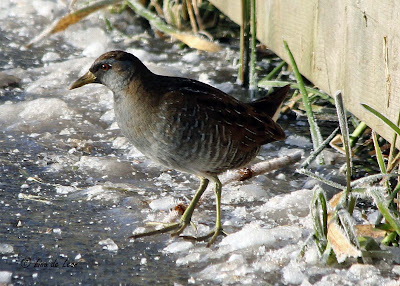 Given the black around the base of the bill the dark brown head with a black line down the middle and the distinct bright white lines on the back, I think that this is a male.  I tried to find information about the cinnamon color on the under tail but most pictures show it to be white as well as written descriptions report it to be white. Is this a juvenile? 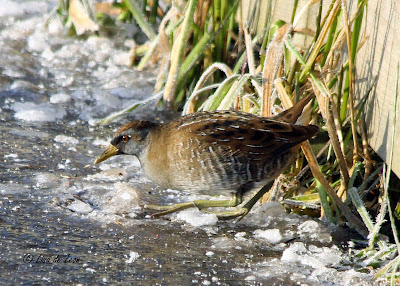 This great little bird (just over 9") was found by Alvan Buckley while he was passing some time before picking someone up at the airport. This is so typical of many great finds...they just appear out of nowhere. 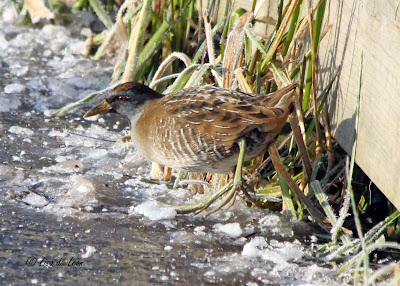 This Sora is a very handsome bird.  The early morning light really showed the richness of the browns. The mix of slate gray and the chestnut color eye really "pop" in the wintry setting. The rusty color on the under tail also was very rich. 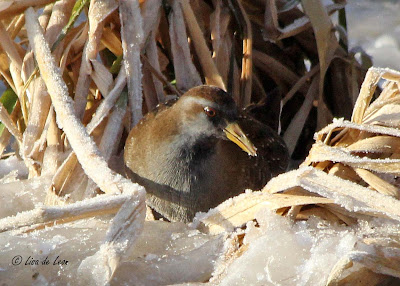 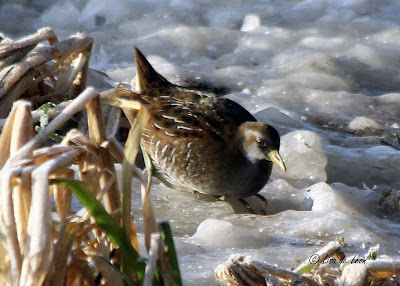 This Sora seemed most comfortable when it could tuck itself into some weed but the scattered seed was certainly enough to get it out and walking around. It seemed well and from what I read the skittishness  is second nature to this bird. 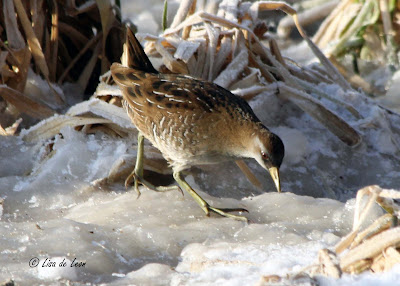 The typical rail feet are much like chickens.  When the Sora walked it actually seemed to cross one foot in front of the other like a top model on a cat walk.  Except in this case it is far from graceful. 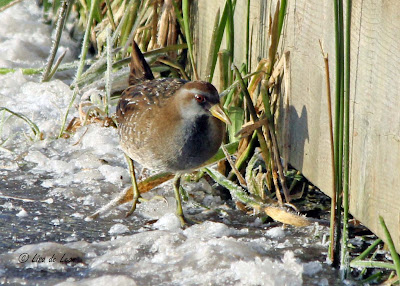 Among the many new birds that I have seen this year, most have been found by someone else and I have rushed to the site to get a glimpse.  A friend and I were talking to Chris Brown about this almost too easy means of seeing new birds.  He called that "skimming the cream."  I'm afraid I have skimmed the cream a lot this year but that doesn't take away from the joy of watching a new bird. 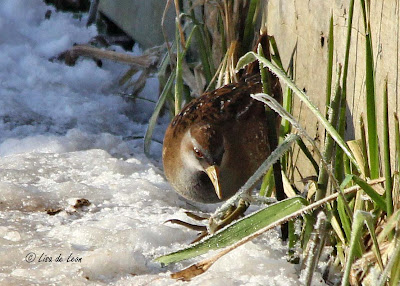 The wind of the last two days has been roaring but the temperatures have been above freezing.  Hopefully, this little rail will be safe in its new environs or will hop on the wind and migrate to a warmer region.  It has been said that one day a marsh can be filled with Sora and the next day they will have all vanished using the cover of night to migrate south. 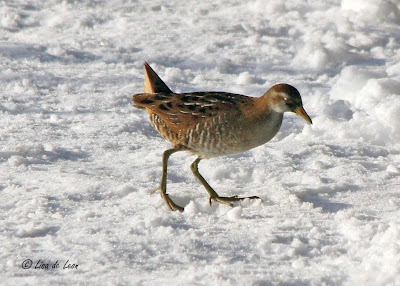 The Sora are uncommon breeders on the west coast of the province and are more likely to be seen in Spring, Summer or Fall. It is quite uncommon for one to show up in St. John's in winter. Yet, it has taken up residence around a community walking trail. While it quickly became comfortable with birders sitting low and still, it moved about quite freely. However, when someone would come walking down the boardwalk it would high-tail it up over the boardwalk and into the tall grass where it would stay for quite a while until the coast was clear to re-emerge.

Note:  Click on the pictures to enlarge them.
Posted by Lisa de Leon at 8:18 AM