Is it a Semipalmated Sandpiper? 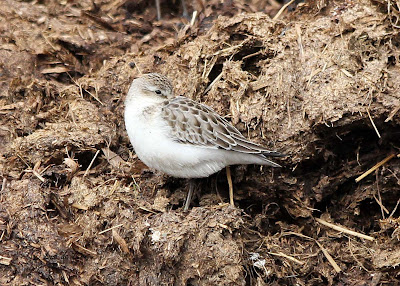 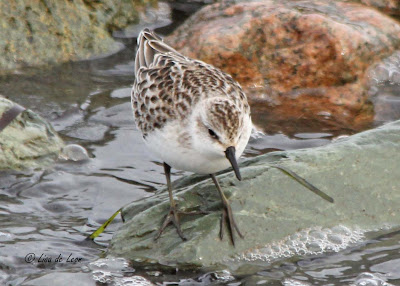 The holiday season has kept me busy for the last couple of days but I have been mulling over this post on Semipalmated Sandpipers. I have had a number of inquiries about the webbed foot on this shorebird and because that is the final characteristic for my identification of this bird, I usually try to shoot the feet.  Today I am going to think out loud so to speak in an attempt to make sense of the many pictures that I have collected of the "peeps" without relying totally on the feet. 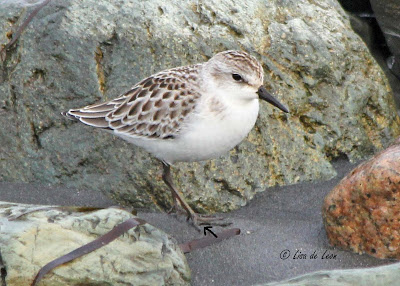 Not all Semipalmated Sandpipers are so accommodating as to put their feet out for me to see, I have been trying really hard to learn to differentiate this little "peep" from the rest.  It is not so easy when the kelp-riddled shorelines are alive with little shorebirds moving about everywhere.  Some are pretty easy to ID such as the Yellowlegs, Ruddy Turnstone, Black-bellied Plover and Semipalmated Plover.  Although the Least Sandpiper is sometimes in the mix they are pretty easy to identify with their dark brown plumage and yellow/green legs. 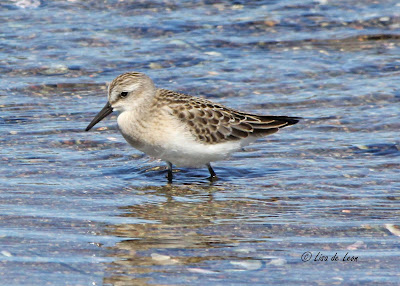 That leaves me with the Semipalmated Sandpiper, White-rumped Sandpiper which does not always show its rump and the Sanderling which seems to go through quite a bit of transformation during the season. As I study my pictures of the Semipalmated Sandpiper, I have determined (right or wrong) that some of these pictures show the juvenile SP Sandpiper such as the one to the left and some adults transitioning out of breeding plumage as the one pictured below. How so, the juvenile has a darker lore than the adult winter bird.  This picture was taken in late September.


The bird pictured below which I think is an adult in transition has more buff on its breast and is much darker on its back, scapular and secondaries.  In addition to this, the time of the year that the picture was taken is relevant. This picture taken below was shot in late August shortly after the arrival of the shorebirds. 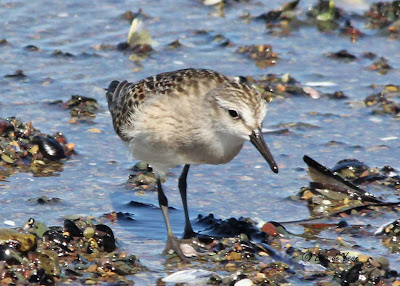 Identification challenges are often compounded by the day's light, the stages of molting from breeding plumage to winter plumage and the natural surroundings.  The age of the bird can also affect the appearance. The one good thing is that it seems that the gender of these birds does not have significant variation. 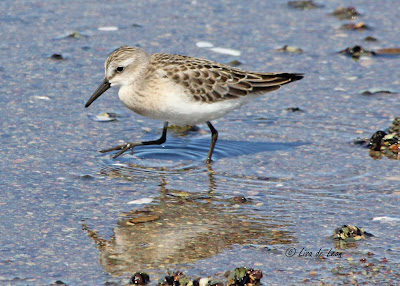 I have found these little "peeps" often seem to pick up some of the color from the environmental surroundings and the same bird can look different depending on where it is located on the beach. 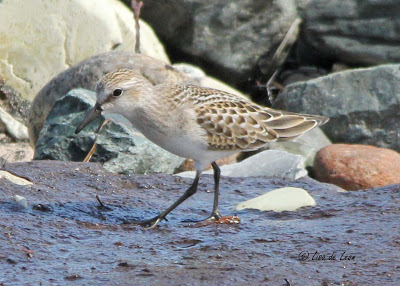 By the time these little shorebirds reach the beaches of Newfoundland, they are already losing their breeding plumage.  This one appears to still have more than most that I saw.  This picture was taken in early September and the bird shows more color on the breast and back as well. 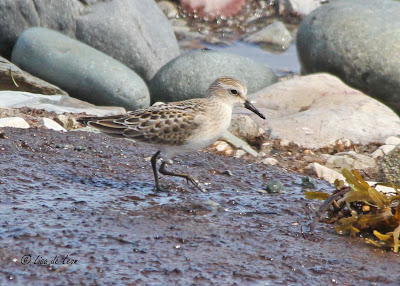 The Semipalmated Sandpiper can be as much as an inch to an inch and a half smalled than the White-rumped Sandpiper but rarely do these birds line up near each other so that I can measure them.  Unless I am able to see them close together the size thing is really troublesome.  The size of birds on the beach is tricky.  Through the binoculars they look larger than normal, at mid-distance without binoculars they look small but when they are really close they seem very tiny. 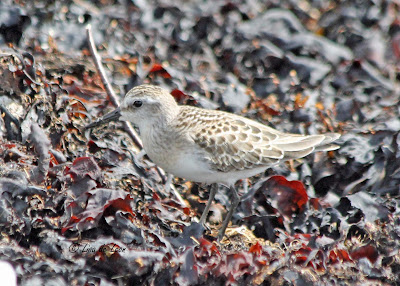 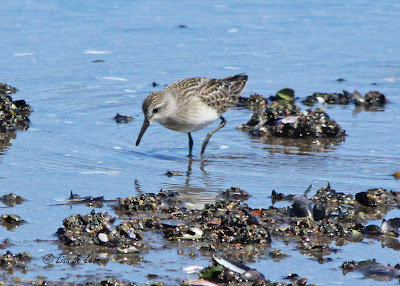 In this image and the image above the beak looks longer but that, I think, is an illusion of the angle.  The beak is stout and the wing feathers do not extend beyond the tail, the markings on the breast and shoulders are evident, hence I think this may also be an adult. The photo was taken in late August.  It seems that making an identification requires looking  for both traits that are present and those that are not present. 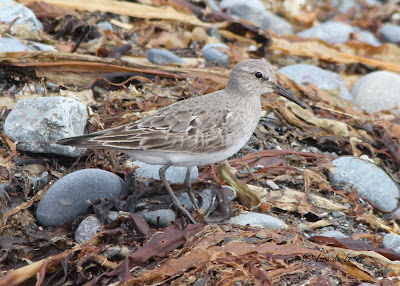 For comparison I have added a few pictures of the White-rumped Sandpiper and the Sandering.  Trying for an ID from a holistic framework I can see that this bird appears to have a larger overall length, the beak is longer and thinner, there is a slight color at the base of the beak, and the key trait is that the wing feathers extend beyond the tail.  The breast streaks also extend much lower than on the SP Sandpiper. 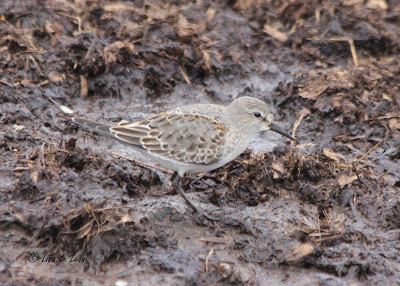 Here is another White-rumped Sandpiper with slightly different coloring but once again the overall size, shape and beak of this bird all point to the White-rumped in fall. This picture was taken in mid-September. Note that the white rump which is the the trait unique to this sandpiper is not showing.  This  is the only "peep" that shows a white-rump in flight. It is also sometimes possible to see it as it moves about and preens. 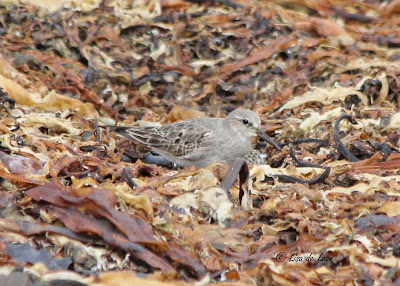 If time permits wait long enough and the white-rump will appear.  This shot shows the bird crouched down behind the kelp where the wing and tail feathers cannot be seen clearly but the longer, slightly down-turned beak point to the White-rumped as well as the size and shape.  I have tried to go into more de 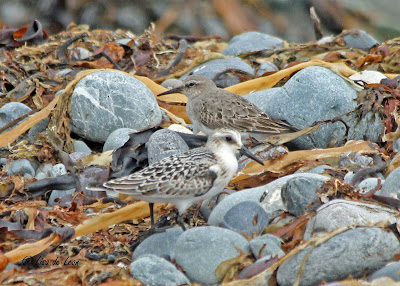 Once again for comparison I have provided a picture of a Sanderling which if often found on the beach with the SP Sandpiper. It is clearly different  and stands out because of its lightness in color. It is the most whitish of the small shorebirds.  In breading plumage it is quite rusty on its head, back and breast.  In Winter it has a gray back with very distinct black shoulders. A juvenile can have a lot of black and white flecking on its back.  I think this is a juvenile Sanderling.  Another very important aspect of identification is the behaviour.  The Sanderling is often seen chasing the waves.  It rushes out behind an outgoing wave to pick up any food left behind.  As the wave returns the Sanderling will hurry along ahead of the wave back up the shoreline.

Interesting:  The spellcheck wants to change "semipalmated" to "simpleminded."  Maybe that is really what this post is. Nevertheless, I am in my own way trying to figure out what I need to know to be able to see these birds in their natural habitat and know which is which. While my method is not polished nor refined in any way, all new birders have to begin somewhere to develop the ability and knowledge base to be able to identify birds on the spot. Perhaps in a couple of years I will be able to report a more sophisticated analysis of the different characteristics of these three birds. It is typical of a learner who first encounters new information to try to incorporate the information into a comfortable frame of reference.  Once the info is truly learned the rendition of what has been learned moves closer to that of the experts.
Posted by Lisa de Leon at 10:30 AM