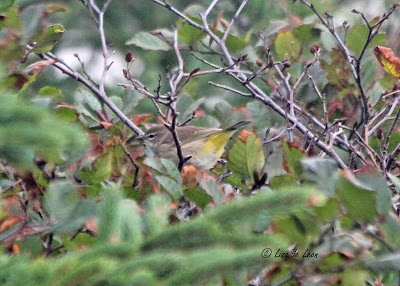 These pictures date back to October 1, 2011. The East Coast Trail starting at the foot of the old lighthouse had been bustling with migrating birds since September. This is the same location where I saw the Blue-gray Gnatcatcher. On an early Sunday morning Catherine Barrett and I decided to see what we might muster up. 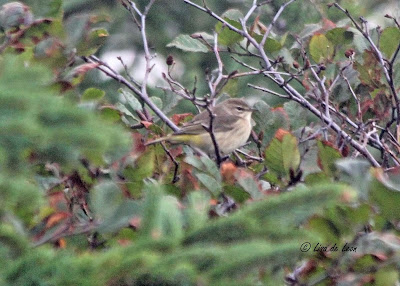 The area was unusually quiet compared to recent days.  Perhaps it was the early morning hour, just after daybreak, and the birds may not have really gotten into gear yet. It seems that at that time of year the birds move around a little later as the day warms up. 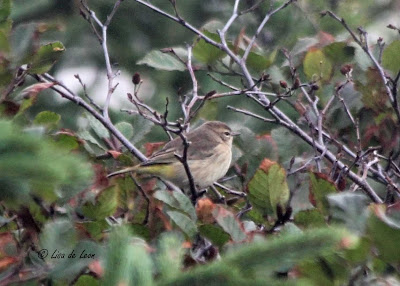 Catherine and I were checking different areas some 100 feet apart.  I saw her with her binoculars up, up for quite a while.  That is a pretty good sign that she had something interesting.  I worked my way toward her and indeed she was watching one small bird flit about in and out of cover.  I got there just in time to get these few record shots. Neither of us was sure what the bird was. It resembled a Yellow-rumped Warbler but not quite. This bird appears on Peterson's Plate of confusing Fall warblers.  It is easy to see why. 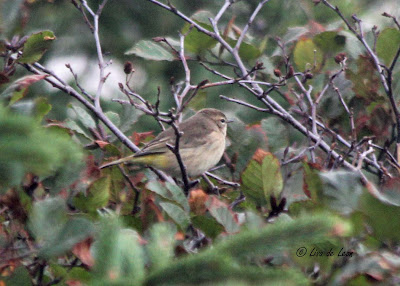 Not knowing what it was, we birded on.  Given the minimal activity in the area we gave up and headed home.  On my way I ran into Dave Brown who I knew would know the bird.  He told me the bird was a Palm Warbler; not just any Palm Warbler, it was a Western Palm Warbler. Ooh... now I had to go study another bird.  I learned that there are two distinct Palm Warblers:  The Yellow Palm that frequents Newfoundland and even breeds here and the Western Palm Warbler which as the name suggests is typically found in a range much more western than the Yellow.

I also learned that the Palm Warbler wags its tail frequently and is usually found on the ground.  This one was flitting about at around eye level, and I didn't have time to notice if it was tail-wagging or not.

Once I learned what the bird was I really wanted to see it again. However, the long up-hill hike into the area was a deterrent. I left with a sense of satisfying amazement of having seen yet another new and unexpected bird.  Hats off to Catherine for locating it. This has turned out to be a very special year of birding for me and I will be compiling a year-end report in the days to come.
Posted by Lisa de Leon at 7:25 AM