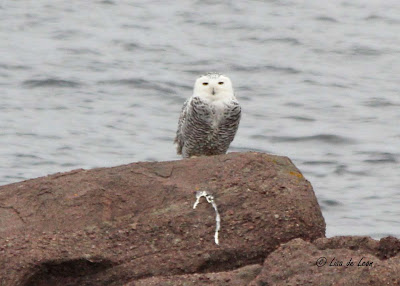 Amazing! My first Snowy Owl in the wild! Recently, I have been in a bit of a "bird slump."  The good weather turned to not-go-great weather very quickly. The winds have been high and birds scarce, at least for me.  There have been reports of numerous birds but I couldn't find any of them. On top of this I had some family responsibilities that have kept me busy. 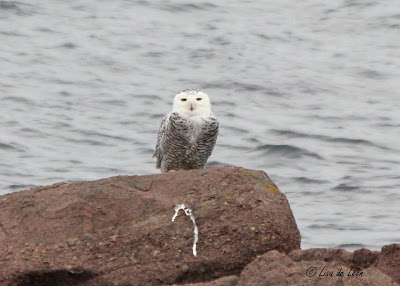 When December 1st rolled around, I decided to start fresh and work on a winter list. That way every bird is an important bird.  I have been out looking around quite a bit over the last week and have found a few good birds and just missed a few.  As one birder told me, "Welcome to birding."  Clearly you win some and you lose some. 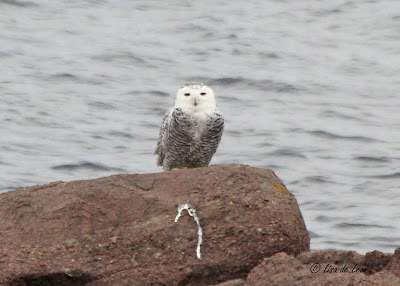 Yesterday, I set out to see the Lincoln Sparrow. I gave it a good try but could only turn up the Fox Sparrow.  I decided to drive to Cape Spear and try the sparrow again on my way out. (No success on the return trip either but I did see two Golden-crowned Kinglets across the road from the Lincoln Sparrow marsh.) 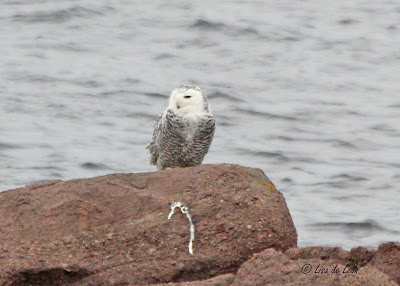 As I drove out to Cape Spear I thought, " wouldn't it be nice if there were a Snowy Owl just sitting on a rock waiting for me. Hmph, not likely."

When I got to the cape there were two other cars in the lot and I recognized one as belonging to Margie.  I thought she and her son, Paul, might be down by the "look out."  I got out of the car and headed down the path just below the lot.  I got about half way between the lot to the water when I noticed something sitting on a rock. Ooooo, I thought, "maybe a Peregrine Falcon." I slowed my pace and began to move with more respect for the bird. 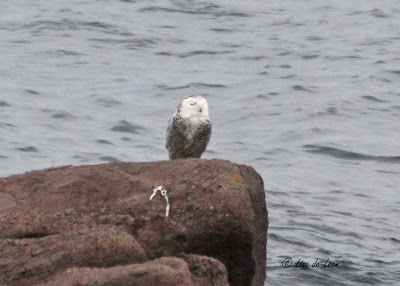 I finally got close enough to see through my binoculars that it was a Snowy Owl!  What? I couldn't believe it! I took a few distant pictures and began to move a little closer, all the while looking over my shoulder to see if Margie and Paul might be around. There was no sign of them so I continued to inch toward the small deck below. Without warning, the owl lifted off and disappeared behind the rocks along the shore. I stood there stunned. 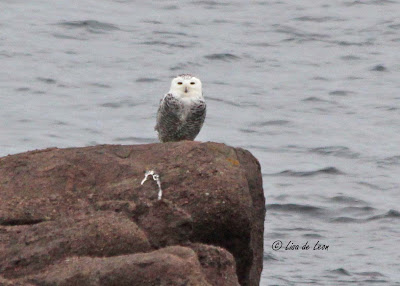 I began to walk along the path overlooking the rocks to see if I could relocate the owl.  It was then that I saw Margie and Paul at the upper "look-out."  I shouted "owl."  They knew already.  I asked if they saw it.  "No."  "How did you know?"  They had run into Terry James who showed them a picture of an owl that he had just seen. By this time I had reached them, tip-toeing through the wet grass to reach them.  I showed them these pictures and their first reaction was that the bird in Terry's pictures was not so dark. Hmmm...

We went separate ways.  They walked the path that I just left and I walked up the east face toward the light houses.  We met up again in the parking lot and neither of us had seen the owl on this jaunt.

Could there be two owls out there?  I don't usually post my new pictures right away as it takes me time to sort through things, but I decided to upload these images for a point of comparison if anyone else may see an owl at the Cape.  Could there be more than one owl out there?  Short of seeing two together, only pictures will tell.
Posted by Lisa de Leon at 7:35 AM