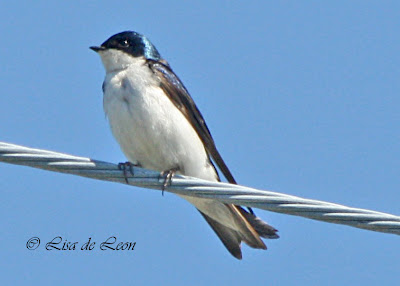 Since the Tree Swallow returned about six weeks (or more) ago, I have been trying to capture a picture of them.  Tree Swallows, as with other types of swallows, fly in groups of three or more. One group of 100 plus was spotted at Second Pond, Goulds.  They zip through the air in sophisticated aerial maneuvers that defy gravity. They are fast, very fast! To try to focus on one bird is almost impossible, much like trying to catch a bullet by hand from mid-air. 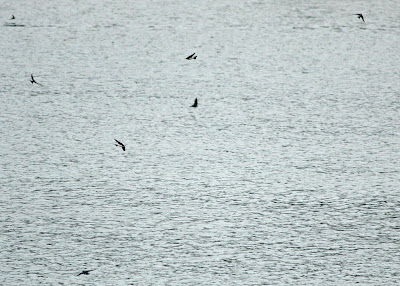 This is the typical scene, with swallows zipping in all directions. It is amazing that they don't collide! In this picture there is at least one swallow that is not a Tree Swallow. Can you identify the different bird? Hint: Check the shape of the tail. 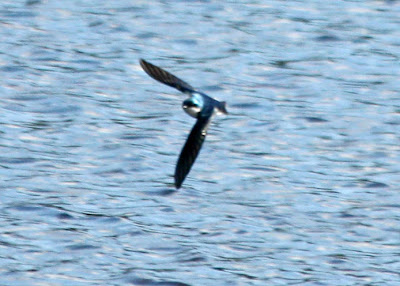 This is one of the better flight shots that I got of a Tree Swallow. Even the shape of the head is somewhat like a bullet. This image does reveal the blue-green iridescent color of the head and back. The white under parts stand out against most any background. The Tree Swallow will fly close to allow for good viewing but they don't hang around. This morning, I saw three at Mundy Pond. They often flew over my head but there was no chance to catch them with my camera. 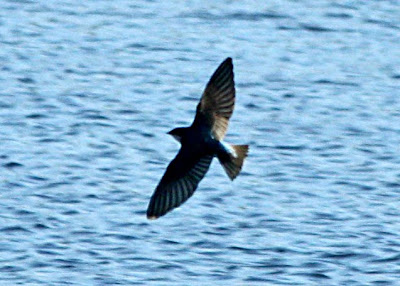 I have included the flight shots because it was such a challenge to get these, as poor as they are. I have been holding on to these shots because they were too poor to post alone. Then, about two weeks ago, I got my opportunity. 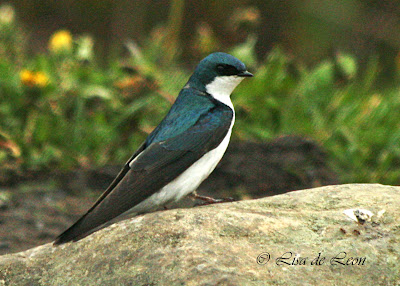 I went fishing late one afternoon. I have learned my lesson about going anywhere without my camera, so I hung it around my neck and started the short walk into the fishing spot. Totally unexpectedly, I found eight Tree Swallows sitting on the ground and on a rock. They did not flush easily and I got a really good look at them. As usual the lighting was not great but I have seen worse. 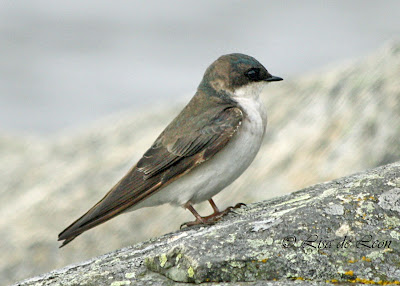 I was lucky to come across these birds at all but even more so to have found a juvenile, as well. The juvenile has a mix of green and brown on the back and a hint of a breast band on the front. These are very common and very striking birds. It is very entertaining to observe them. 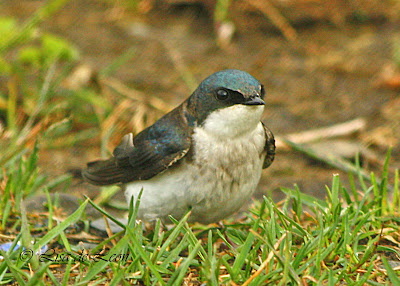 Over the summer there will likely be many opportunities to see the swallows. There are three different kinds often found in Newfoundland. The Tree Swallow can be distinguished by its blue-green head and back, white breast and its notched tail. 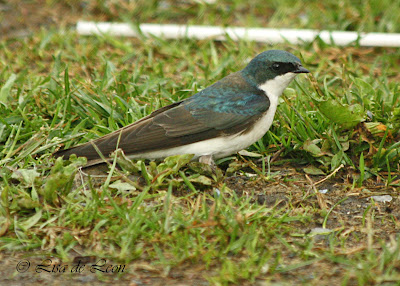 I have seen them at Kent's Pond, Kenny's Pond, Long Pond, Mundy Pond and several of the ponds in Goulds. The best photo op with this bird is to find it perched on a wire, a tree, a rock or on the ground. Good luck trying to photograph it in flight!
A Violet Green Swallow recently visited Virginia Lake and set the bird world in St. John's in a tizzy. It was the first sighting of its kind in the province. It is that unpredictable nature of this hobby that keeps it fresh and makes each sighting a special event, even for the seasoned bird enthusiasts.
No, I didn't catch any fish but my catch of the day was just as good.
Posted by Lisa de Leon at 2:29 PM