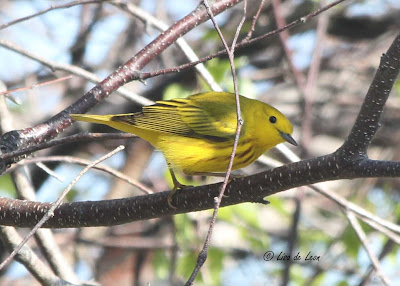 The Yellow Warbler is one of the brightest summer birds.  Their warm colors and cheerful songs would cause anyone to stop and enjoy.  Although, this year their numbers seem to be down compared to last year. 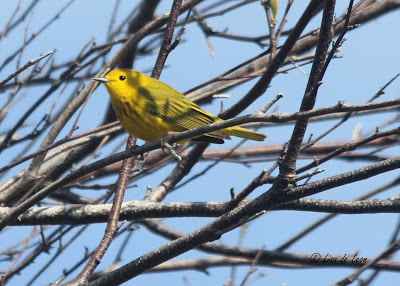 One of the most reliable places to see and photograph the Yellow Warbler is at Mundy Pond. They appear in this area in greater numbers than any other location I have been. 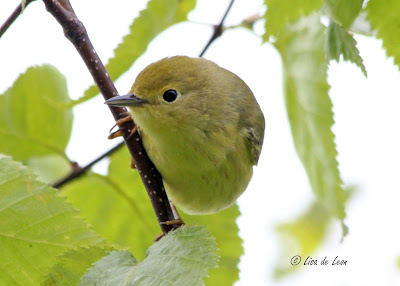 There is a lot of variation in the yellows of these birds. Some males are very golden with bold reddish stripes on the breast.  Some are less striking.  The female, on the other hand, is more of a mellow yellow. 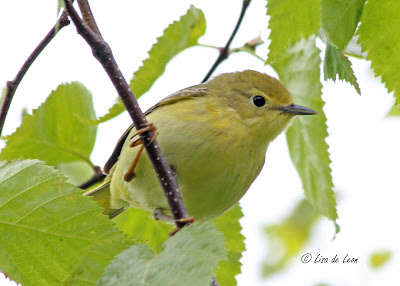 The first-year Yellow Warbler is even more brownish.  It may not be too long before the fledgling begin to appear as recent pictures of Yellow Warblers show them with their mouths chock-full of food for the young. I came upon this Yellow Warbler nest in early April, left over from last year. When I returned to the area, several weeks later to show it to my granddaughter, someone had broken the limb off and torn up the nest.  What a shame! Apparently, the weather usually does the job on these little nests during the winter, but this one at Kenny's Pond was in a sheltered area. With the leaves on the trees, it is not likely that the nests will be visible. Nevertheless, I thought I would share this picture just in case anyone finds a cone-shaped nest and wonders about it.

Judging by the amount of warblers I have seen carrying food, there will soon be many newcomers appearing in the woods. Maybe the birds will begin to sing a little more when their work of child rearing is complete.﻿
Posted by Lisa de Leon at 6:48 AM