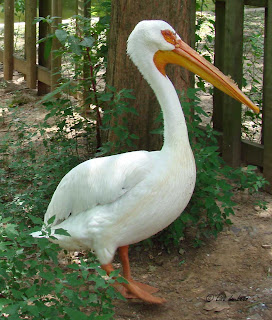 This is our target bird, an American White Pelican. (These shots were taken in Arkansas in 2010). This bird is hard to miss at 30 pounds with a wing span of up to nine feet. One arrived in Newfoundland being about 3000 miles off course. According to the bird historians, this is only the third record of a pelican reported in this province.

First reported on May 21 to the media by a citizen from Roddicton, NL,  this bird has made quite a splash. Pictures verify that the NL pelican is a breeding male, so determined by the plate on its bill. This bird pictured here is a female - no plate. 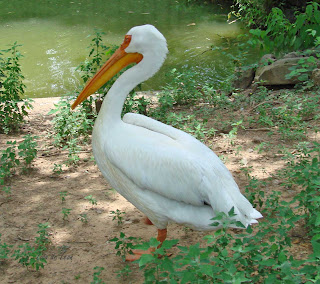 Considering the rarity of this bird in our area, birders are closely following the movement of this visitor in the hopes of being able to get a glimpse.  So far, it has evaded most of the Avalon birders.  Margie M. and I made an effort to see it on May 31st, but it got away.  Keith Fillier and Shawn Fitzgerald also came up empty on that day. Clyde Thornhill made an effort to see it on June 1st, but once again, no luck.

Given the information about the sightings, including the dates and locations, is it possible to predict where it might go next?

I have put together a map of the known landings and dates in an effort to predict its movements.  It is quite likely he has  already left the Avalon on its way back where it belongs. 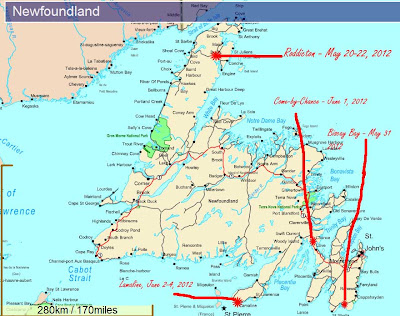 The land distance from the last sighting in Roddickton on May 22 to the next sighting in Biscay Bay on May 30, is 1048 land km with a travel time of 14 hours. Of course, the pelican probably travelled along the coast line but the distance would be very similar. It is hard to say if it travelled all the way to St. John's and down the southern shore to Biscay Bay, probably not.  It may have crossed over the isthmus around Come By Chance.  It is only a guess, mind you, but the White Pelican appears to be travelling about three to fours hours hours a day to cover the distance between sightings.

At any rate, it took 8 days for the pelican to travel the route and be spotted in the pond opposite Biscay Bay.  This bird is known to prefer shallow bodies of water and coast lines so this was a logical place for it to overnight.  It was in Biscay Bay where it was spotted one evening (May 30) and departed early the next morning (May 31). Unfortunately, it had moved on by the time we reached the area.

It was on June 1st that it was spotted in Come By Chance, 231 land km. away. Once again the bird probably flew along the coastline but the distance will be somewhat the same amounting to a travel time of about three to four hours a day. (Some reports have it that a White Pelican can fly up to 55 mph.)

From June 2 -4, the pelican was reported to be in the coastal waters off Lamaline. Once again this distance was about 235 km. There definitely seems to be a pattern here.  If the pattern holds, its next stop would be near Rencontre West or Burgeo.  This area is less populated than some, and it would be easy for the bird to pass through theses areas without being seen.

At the current tracked rate of movement, this White Pelican only needs two to three more hops and it will find itself  within a day's travel of Nova Scotia. Unless, it decides to back track, stop off for a visit in St. Pierre and return to us, we may not get an opportunity to actually see this rare and exotic visitor. Nevertheless, it has been exciting to watch its movement and sightings across the island.
Posted by Lisa de Leon at 8:31 AM