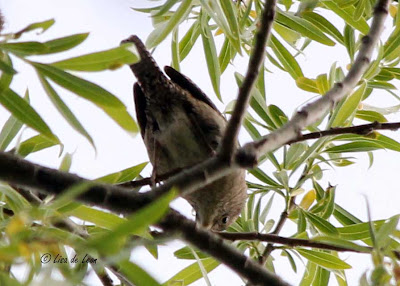 Here is my first wren of any kind seen in Newfoundland. This one, a House Wren, was first heard and reported by Anne Hughes.  Yesterday, I dropped by in the hope of seeing the bird and was advised to return in the morning. It is that time of the day the bird is in full song. 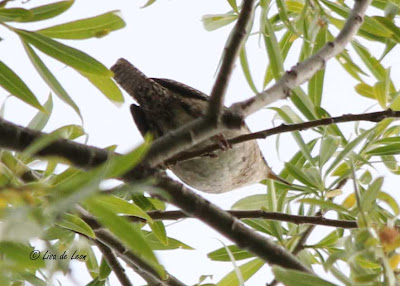 Being an early riser has it benefits. By 6:45 a.m., I was on my way to Rennie's River to search for the House Wren. I didn't have to do any searching, just show up.  The wren was singing loudly in the upper limbs of a large tree along the river. With all of the leaves on the trees, it was impossible to see it from either side.  I ended up directly underneath the bird and shot straight up every time it appeared in an opening. 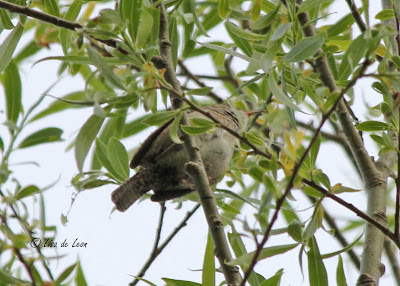 It seemed to be feeding, but it must sing with its mouth full because song was continuous. As often happens in public places, a dog off a leash came charging up the trail and began to bark at me. Some time while I stood quaking in my boots, the House Wren flew. I could hear it, but it was some distance away.  I waited for a while but decided to move on just as John Wells showed up around 8 a.m. I tagged along with him and sure enough, I got to see the bird again. 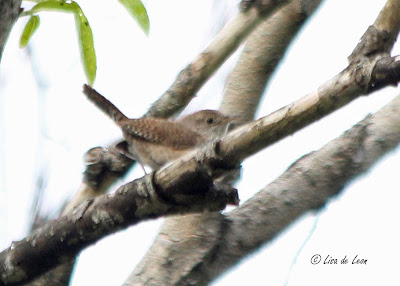 Try as I might, I couldn't adjust my camera quickly enough to account for bright and dark areas and these pictures really illustrate that problem.  However, I included them in the post because they reflect such typical wren poses. 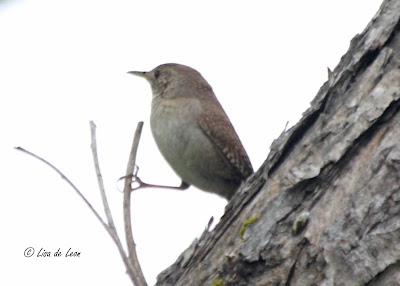 For a little guy, the House Wren is something of a bully. It has been know to destroy nests of other birds and even toss the young out of the nest. This territorial bird is usually found from southern Canada across to the NE U. S. and southward, not in Newfoundland. To learn more about the occurrences of the House Wren in this province, I went to Jared Clarke's web site, link provided on the right side of my page.

He has done a lot of work to document the very rare birds, but the House Wren ranks as rare, with sightings occurring less than annually. The work he has done on his web page is very helpful.  For instance, what records are there relevant to the American White Pelican? How uncommon is a Snow Goose?  Check Jared's site to learn more.  Thanks to Jared for all of his work!
Posted by Lisa de Leon at 8:04 PM