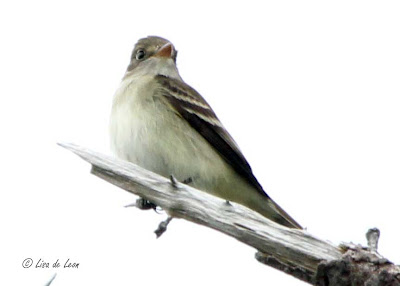 Being somewhat partial to staying dry, it had been ten days since I was last out birding. I counted the days until the sun would shine, and  booked off the day from other things. 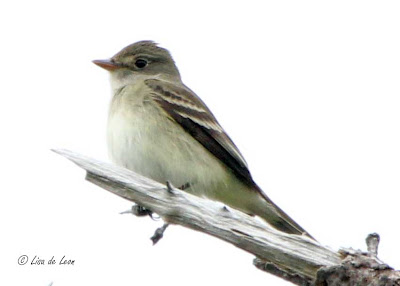 The morning started with a run to Cape Spear. While there were many young starlings, there really wasn't much else. I headed to Goulds where I knew I would get in a lot of walking, even if there were no birds.  I was really surprised to find the birds had virtually stopped singing already.  The woods were not dead-quite, mind you, but there was very little song.  When that happens, it is then dependent on me to pick spots where I think there may be birds. Then, of course, I always stop when a bird flies in front of me. 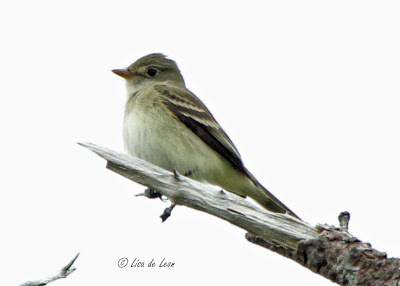 During the day, I mostly saw the usual. I really enjoyed the time I spent with the American Redstarts.  The bold colors and independent nature of this bird appeals to me a lot.  I had a great encounter with a female Pine Grosbeak and a Ruby-crowned Kinglet - stories for another time. 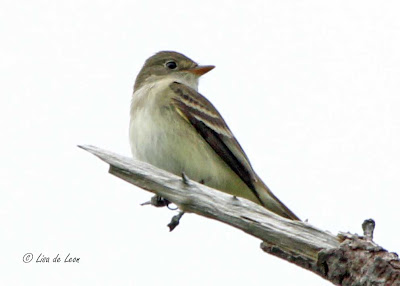 My last stop of the day at around 3 p.m. was interesting.  I pulled off the road near a location of interest from last year.  Although, there was not a sign of movement nor a sound, I decided to walk up a trail in the hopes of stirring something up. It wasn't long before I heard the sound of a flycatcher. Not being too "up" on flycatchers, I didn't know which species. I inched my way toward the sound. Soon, the sound moved to another location. I followed. 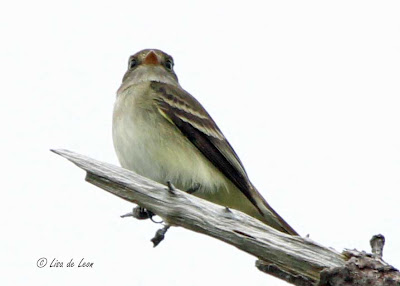 At last, I spotted the small bird in a distant tree. Now, I could watch its movement. I did and after about 25 minutes of watching and waiting, it came closer when I got these shots. To me, it sounded like it was saying "ribbit." Checking the call of the Alder Flycatcher, the mnemonics for its call is "fee-bee'-o." Call it what you may, they sounded the same to me. This had to be an Alder Flycatcher. There really is nothing quite so exciting as finding a good, yet-unreported bird. 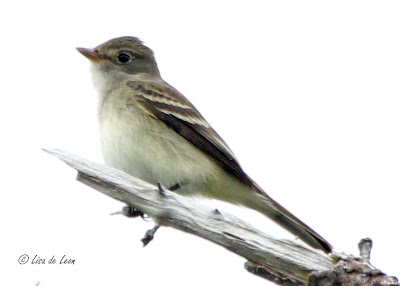 The bird flew, and I couldn't find it again. I headed out the trail, when I saw a flycatcher. I naturally assumed it was the same bird. Nevertheless, at one point I thought I heard a different flycatcher's call. 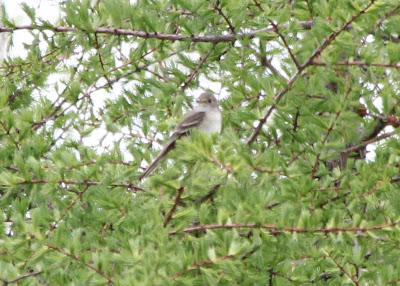 When I downloaded the pictures last night, I found the second bird I saw seemed to have a much paler belly. Could this be a Least Flycatcher? The voice of the Least Flycatcher sounds like "che-bek'." "Che-bek," "fee bee'-o," "ribbit" - oh my, I am confused again. Hearing is such an individual sense: Some hear sounds loudly, others softly, others hear all of the sound and others don't. 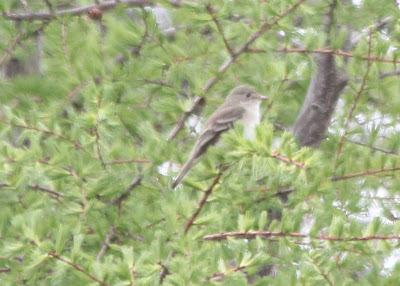 Now, to confuse things even more, the Willow Flycatcher can also be found side-by-side with Alder Flycatchers.  Their sound is described as "a sneezy fitz-bew." Their appearance is almost identical to the Alder Flycatcher and are most often differentiated by the song and habitat. The Least Flycatcher is also known to flick its tail.  Since this bird was so far from me, I couldn't tell if it was flicking anything.

The truth of the matter is, if the Alder, Least and Willow were all sitting on a branch side-by-side singing their hearts out, I probably still wouldn't be sure which was which.

Habitat is also important when identifying flycatchers. This bird was found in a field adjacent to a running brook. Among the habitats listed, the Least Flycatcher is the least likely as it prefers open woods with no mention of water. The Willow prefers drier locales while the Alder prefers more moist areas. Even though, the field where it was located is within 75 feet of running water. 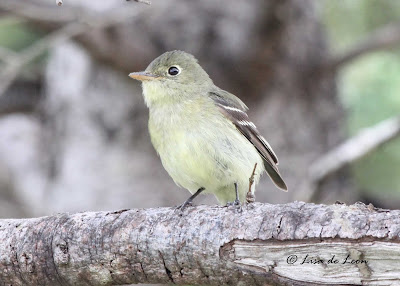 I guess the only thing I am really absolutely sure about is the bird(s) I found yesterday is/are not the Yellow-bellied Flycatcher which has a yellow wash from this throat to its tail as the one pictured above. By the way, its song is "chu-wee."

Ooo-eee, this is challenging!﻿
Posted by Lisa de Leon at 7:14 AM