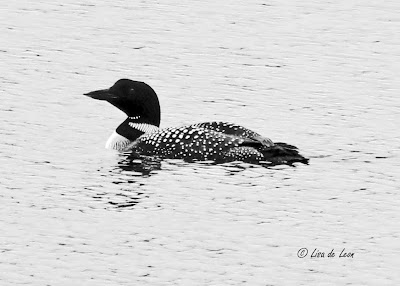 The Common Loon has moved into the inland waters for breeding. Over the winter, it is relatively common to see the Common Loon in the bays on the Southern Shore.
Common Loons are very large and looking very handsome right now in their breeding plumage. While these birds are awesome with their bold markings and size, it is very hard to get a good picture unless you hide away and lie in wait.  As soon as they see people approaching, they typically dive and resurface some distance away or just slowly but steadily move out of range of a lens. 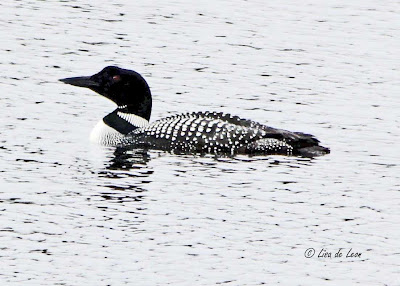 While males and females look very much alike, the juvenile can be readily identified at this time of the year by its gray bill and mottled underparts (similar to the bird's winter plumage.) The juvenile may go through three to five molts before it attains the full breeding plumage as seen here. Since they molt twice a year, it may take a Common Loon between two to two and a half years to reach full adult plumage. This, I assume based on the number of molts.
The call of the loon is haunting and comforting, all at the same time. It is sometimes described as a "loon laugh" or a yodel and can be heard from some distance away.  I heard one fly overhead when I was downtown early one morning this week. When a large dark spot appears on a pond, it is likely a loon.