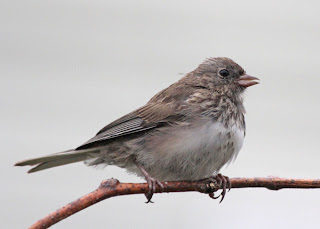 This morning when I opened my patio door, I heard robins singing and found much activity.  Days and days of rain, drizzle and fog have had an effect on all of us. Brighter days bring much more song and flight. Today, I saw my first very young Dark-eyed Junco. This is almost two weeks earlier than last year. (These are not today's pictures because I just don't have the time this morning.) 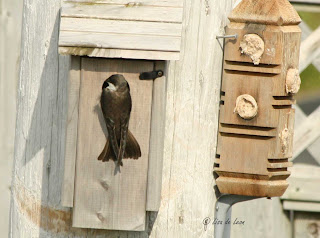 I had just about given up on the Tree Swallows nesting in my yard this summer because  I only saw the male once last week and once this week.  However, this morning the female is in the box and the male is on the wire.  I went back through some older pictures and found this one from 2010. The Tree Swallows checked out the box, but probably because the feeder was so close to it, the box remained empty. 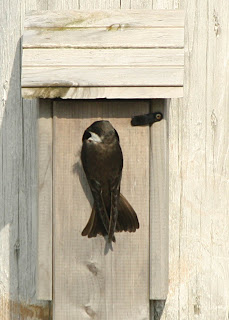 Last year on June 17 the pair moved in. I can't help but wonder if the pair out there this morning, like the junco, is going to begin their family earlier this year. I am pretty sure they plan to stay, and I will watch them closely over the weeks to come. Doing so is much better than watching my perennials bloom. 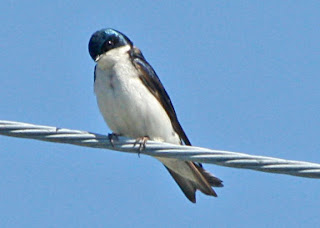 I plan to keep a brief online journal of their daily activities. Too bad I don't have a web cam to see what goes on inside that box!

Update: Today, June 7, nest building has just begun. Two European Starlings dared to approach the box and got dive-bombed by the male and the female came out of the box to join in. Then a male Purple Finch was bold enough to sit on the top of the nesting box. It got the same treatment. There is no doubt now - they are moving in.
Posted by Lisa de Leon at 6:36 AM