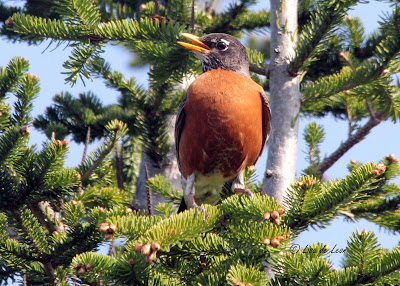 It very easy to tell when you are in a nesting zone with American Robins. Immediately, the male jumps out in the open and begins to fuss in a big way.  The speech is aggressive as is the movement. It jumps around like a cat on a hot tin roof! 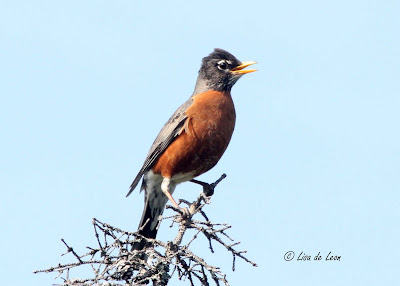 The feathers on the crown bristle and the posture is assertive. Since the female, a paler rendition, is likely sitting, it is the male that takes on the role of the protector. 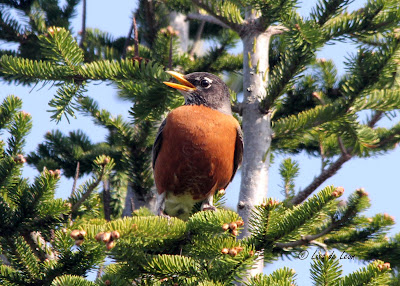 I have been in this particular area off Power's Rd. several times looking for a mystery bird I heard there. Every time I enter the trail, out pops this guy telling me to go away. I move through the area as quickly and as quietly as possible in an effort to not disturb the birds too much.
﻿ 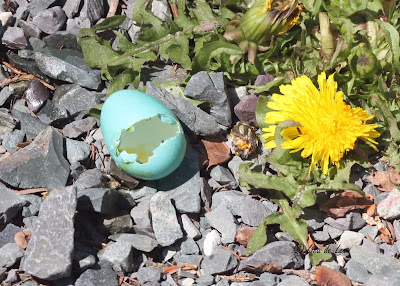 I came across this robin's egg on the trail at Bidgood's Park on May 24th. I don't know much about the hatching process, other than having hatched many quail in an incubator. This egg actually looks like the bird may have pecked its way out. I think this because the opening is localized and there seems to be no damage to the remainder of the shell.  Have the robins all around hatched by now?

I heard a "cheep" rather than a "chip" coming from the trees behind my home yesterday.  At the time I wondered if it might be a baby bird.  It is exciting times to get out and watch nature unfold.﻿
Posted by Lisa de Leon at 7:15 AM