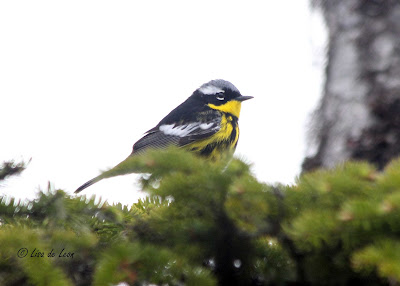 First, let me address the McAfee Warning that has been popping up on my screen when I enter my site.  It does not happen every time but enough to concern me.  I have been told that it is happening on other people's screens as well, and it is definitely hurting the traffic as people hesitate to move past that barrier.  Nothing has been added to my site recently that might cause any problems. I will remove some of the gadgets as they may be the cause of the alert. I don't know how to complain about this but will try to get it worked out quickly. 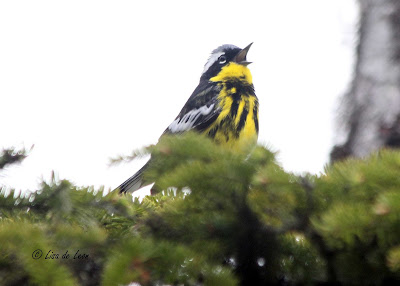 After visiting the Magnolia on Power's Road a couple of times and returning home with no pictures to share, I decided to pop back and apply the time necessary to get a really good look at this hard-to-see warbler. 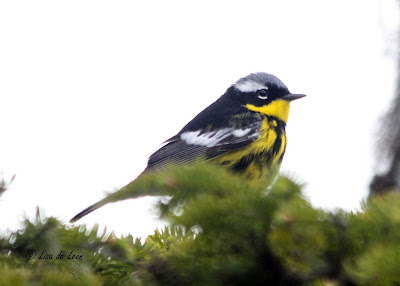 While I have seen one Magnolia each year of my birding, they are not seen frequently. It is good to make the most of it when it is so readily available. 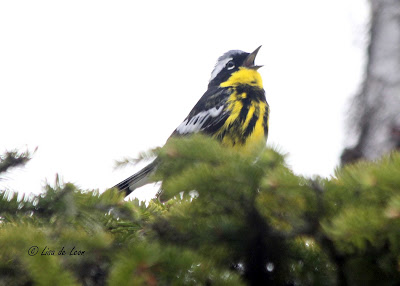 Seeing a really good bird is like seeing a great movie:  Every time you watch it, you hear or see something more that enriches the experience. Such was the case with the Magnolia. It came down out of its high perch and flitted around among the brush at about three feet.  It was not always visible, but every now and then, it would pop up long enough for me to get a shot. 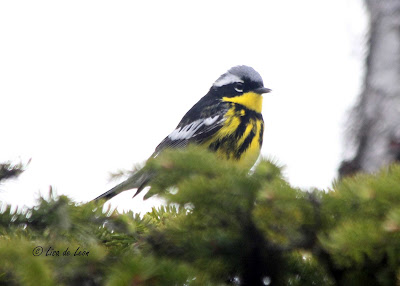 I was really taken by the richness of the golden yellow, especially under its beak. The bold dark stripes down its golden belly are stunning. 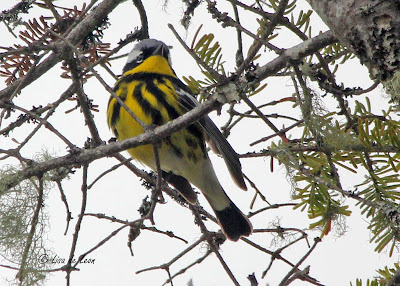 It was a cold, overcast day yesterday so the yellow didn't show as well as it could have. The best part of birding yesterday morning was that the wind was very low. Trying to ignore the frozen rain falling around me, I saw just how different this bird is from the Yellow-rumped Warbler.  Both birds bear some resemblance around the head and eye, the back also is similar. If seen from a distance or the back, it might be very easy to mistake the Magnolia for a Yellow-rumped.  The markings on the underside tail are quite different , the wing-bar stripes and of course, the flashing yellow rump is the give-away for the Yellow-rumped. 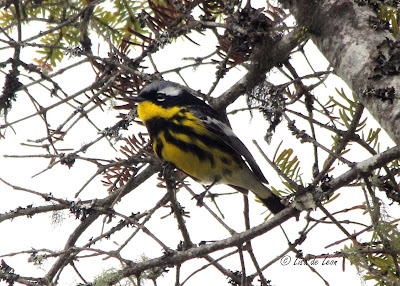 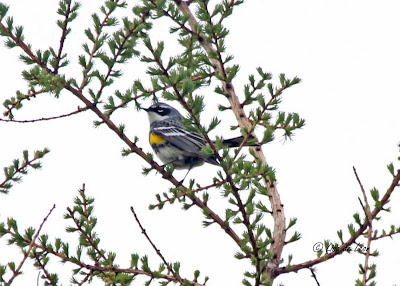 I left the road feeling satisfied that I had studied this bird well. Its call is very distinct, and I am working on trying to remember it.  At this point, all that I can recall, is that it is quite different from the other common warblers in the area.
I attached a picture of a Yellow-rumped Warbler for comparison.﻿
Posted by Lisa de Leon at 7:34 AM