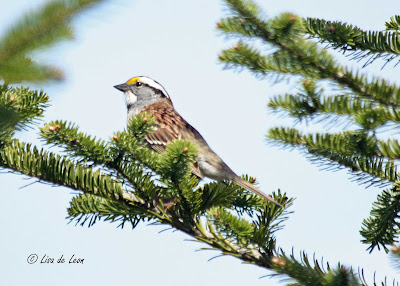 In preparation for the onslaught of birds soon to be arriving, I have been reviewing pictures, dates and locations.  All this, hoping that I will be able to make quick identifications and learn more about the birds this year.  It was on May 27 last year that I got my first opportunity to see the White-throated Sparrow looking very handsome at Bidgood's Park in Goulds.  For sure, I should be able to know this little sparrow right away. 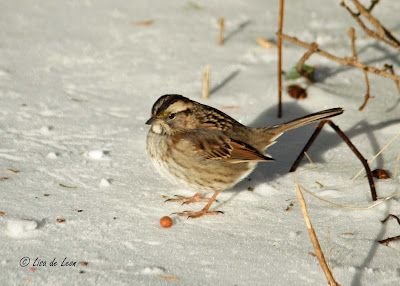 Nevertheless, they don't all look just like the bird guide rendition as pictured above. As I flipped through my pictures, I have come up with a whole series of White-throated Sparrows that look somewhat different.  This little white-throated was photographed in January 2010 at Long Pond. Is this the tan-striped form or is this the winter plumage? 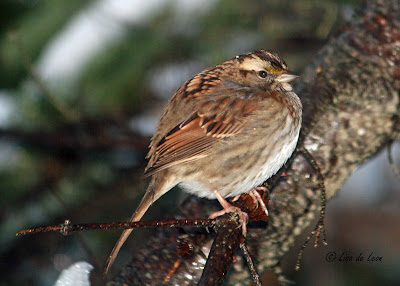 This is the same bird in February.  The weather is colder, and it is puffed up seemingly to keep warm. 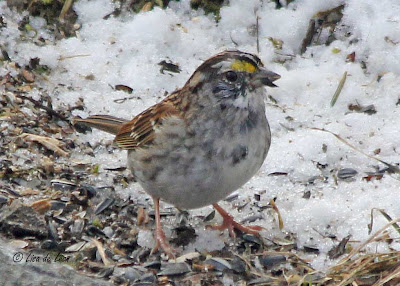 This White-throated Sparrow was an early "arrivant" that showed up at Paul and Catherine Barrett's feeder in March. Will this one transition into the hightly contrasted, white-striped breeding plumage as seen below? It certainly seems to be on its way to moult from its winter plumage to spring. 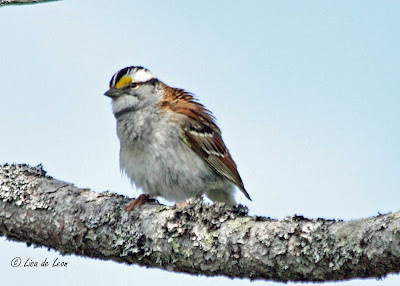 This, and the following image, was taken on May 27, 2011 when White-throated Sparrows were abundant at the park.  The bright yellow lore, pure white stripe above the eye and bright white throat all fit the text book description. 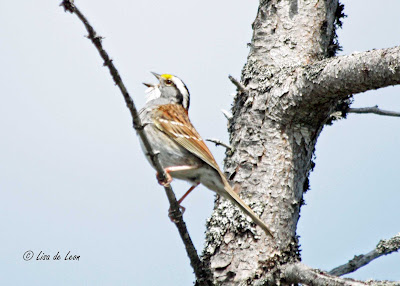 These sparrows are also easy to identify from a long distance away by their song. The cadence of the song is quite distinct. In mnemonics it has been said to sound like this: "O-oh sweet Canada, Canada, Canada." The first two notes are loud whistles, followed by trilled whistles. Follow this sound, and it is likely that a White-throated Sparrow will be perched in a tree singing its heart out. This should be happening within two to three weeks. I can hardly wait. 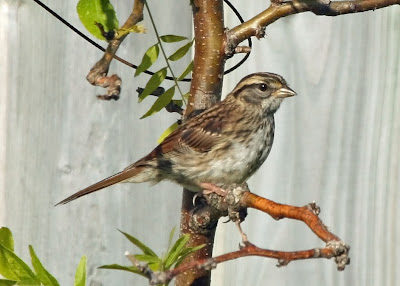 This White-throated showed up in my backyard toward the end of July 2010. Given the amount of streaking on the breast where it should be gray, I am guessing that this is an immature White-throated Sparrow.﻿ 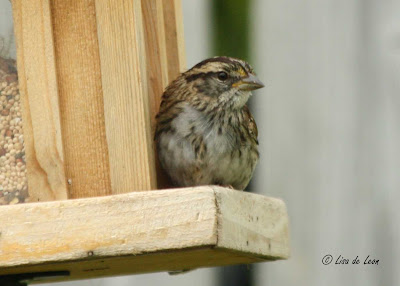 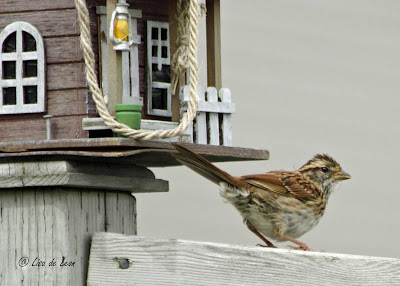 One week later, the probable same bird returned looking very much as it did before. This time it was a little more active and confident.

I watched and watched last summer in the hopes that this species would return to my yard again but not on my watch.  I must admit that I was more often out in the "field" than I was at home watching my feeders. I plan to be out a lot this summer and hope to see you there.﻿
Posted by Lisa de Leon at 7:27 AM