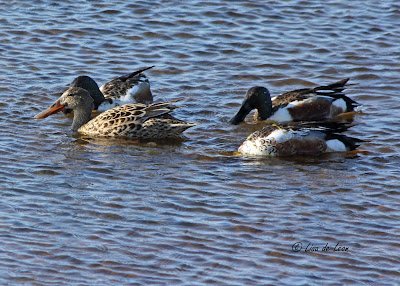 Northern Shovelers are regular, uncommon visitors to the St. John's area. Yet, like most uncommon or rare birds, they may or may not stay very long. I have learned my lesson about assuming I will be able to see casual drop-ins at my convenience. As a result, when these four shovelers were reported in Goulds, I wasted no time getting over to see them on the very day. 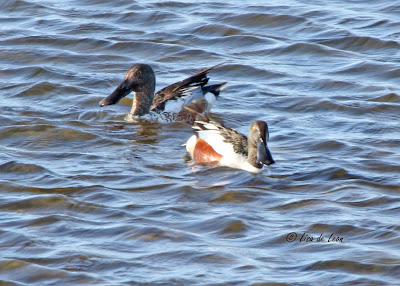 At the sighting, I was taken by the striking color of the males and of course, the amazing spoonbill. These birds are so front-loaded it looks like the weight of the bill should topple them over. 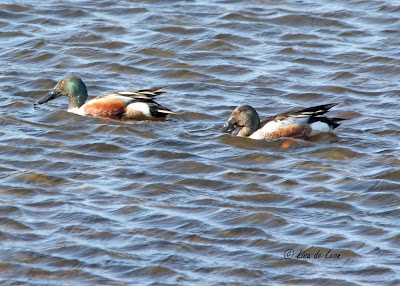 When I got home and began to look at the pictures, I realized that not all the males looked alike. One was clearly a fully mature Northern Shoveler in breeding plumage and the other two were not. Three observations (taken from the field guide) led me to this conclusion: The mature, male Northern Shoveler has a clear white breast, yellow eye and green head. So, I wondered if the other two might be immature. I began reading about this species. Sifting through the online info, I found information that led me to think that among this group there was one mature, one immature (first cycle), and one mature male coming out of its eclipse plumage. This conclusion is not definitive, mind you, but here is why I think this might be so: 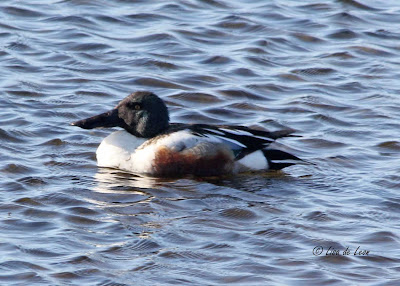 Among the three males I observed, one had no streaking (i.e. mature male), one has some streaking and a yellow eye (i.e. an eclipse male) as the one pictured above and the other had lots of streaking, a brown eye, and a brownish head (i.e. immature male). From my reading, I concluded the above picture shows a mature male with a hint of its eclipse plumage remaining while the picture below shows an immature male. 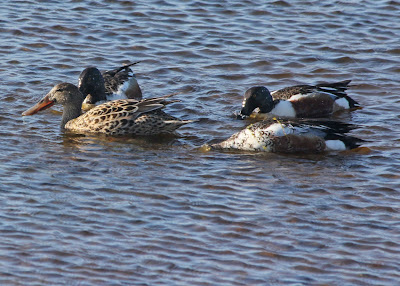 Based on the online description, I think the bird pictured here with its head immersed is an immature bird. The amount of chevron-shaped streaking on the breast and front sides of the white area is quite prominent. 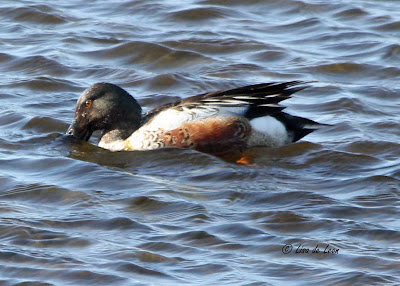 A first cycle Northern Shoveler is reported to have a brown eye, brownish tint to its head and quite a bit of streaking on the front.  That describes this bird to a tee.  With the head up, the eye is clearly brown. Also noted, the rufous side is not yet fully developed. 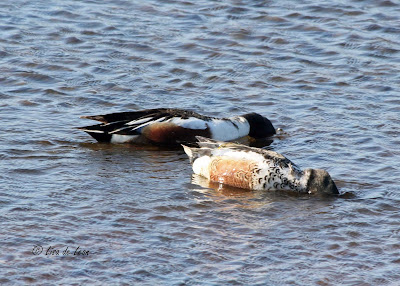 This picture better illustrates the differences with the immature shown side-by-side with the mature bird. 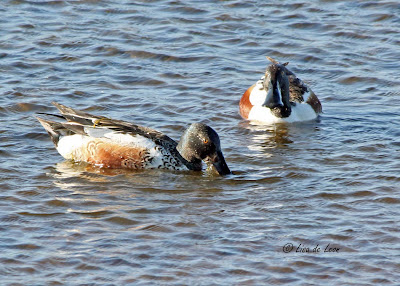 Here is yet another side-by-side shot for comparison. 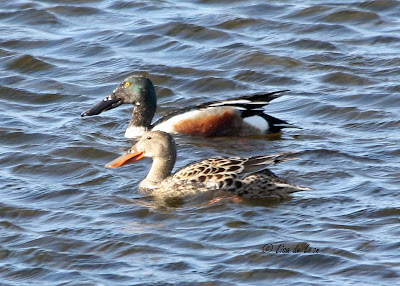 This shot shows a fully mature pair of Northern Shovelers, both male and female. This experience with four Northern Shovelers in one locations with different plumage provided a great learning experience to better understand the plumage transitions. Since we don't get to see this species everyday, I was quite happy they all didn't look the same which motivated me to attempt to learn why. 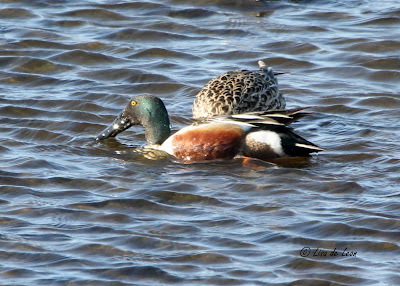 Also showing on this mature male shoveler is the pale blue wing patch. This patch is not prominent on the other two males. 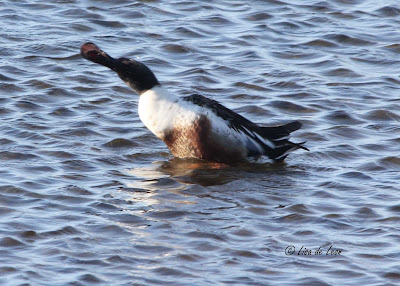 Of course, the most distinguishing feature of the Northern Shoveler is its long spoon-shaped bill. Plumage differences aside, there is no mistaking this bird for anything else.
Posted by Lisa de Leon at 8:35 AM