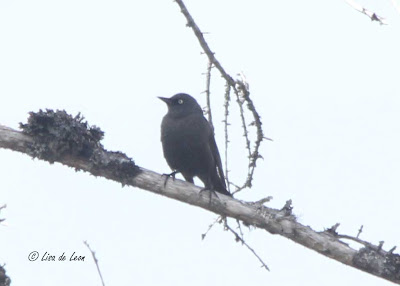 Rusty Blackbirds are uncommon breeders in this province.  While I have seen at least one for each of the last two years, this year I saw a pair. It is clear that they are setting up house. There have been two pair located around the outer edges of St. John's, and I think I saw another at the small pond at the start of Cochrane Pond Road.  I didn't get a picture, so I didn't post the sighting. Nevertheless, it is a good idea to keep and eye open in this area. 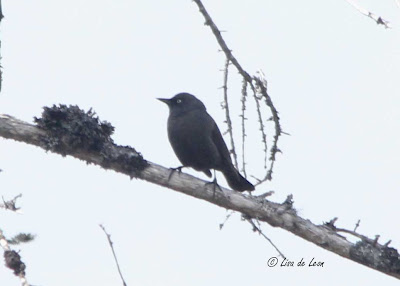 It took me four trips to to see these two birds. On Thursday I caught sight of one flying across the road but couldn't relocate it.  I left the area and returned later. When I returned, two others were also watching for an opportunity to get a good look. The lady found the male singing high atop a tree at the north end of the pond. 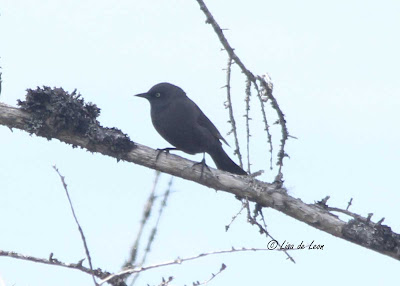 Binoculars yielded a pretty good look but because of the distance and the back light, I wasn't getting any good shots.   With the help of the photographer on site, I changed my settings to manual. Following the settings identified with his light meter, I was able to get much better pictures than with my AV setting. 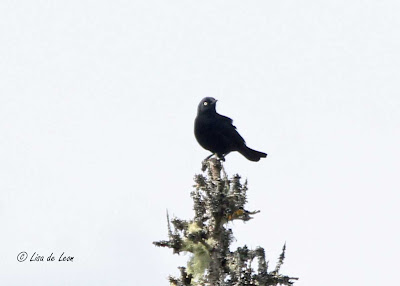 A little bit of help and information goes a long way. I will experiment with the manual settings on my camera to see what I can produce. Given the many unfavorable light situations when photographing birds, it helps to be flexible to get the best photo. My appreciation goes out to both of these birders for first locating the bird and second, helping me get an identifiable shot. 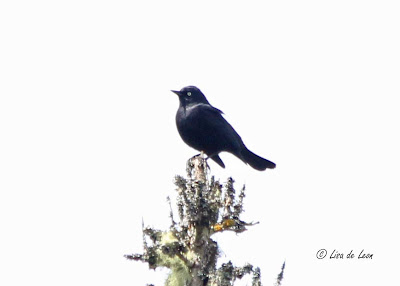 I included a shot below of a Common Grackle taken at Bidgood's Park this week. Rusty Blackbirds and Common Grackles really look nothing alike but they are both members of the ﻿Icteridae family. 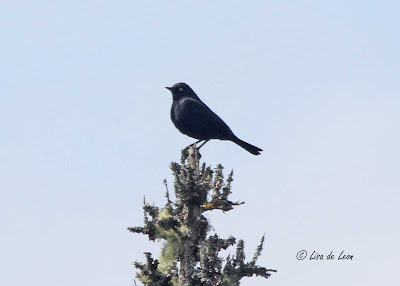 Paul Barrett shared some information with me relating to bird diet. It is very interesting to find that some birds stick to mostly the same foods while others have quiet a varied diet. While reading about the diet of Icteridae, I found they follow something of a Canada Food Guide diet composed of meats and alternatives (insects and small aquatic life) fruits, seeds, and grain. I would like to thank Paul for the following information:

Note:  It was impossible to cut and paste the info into this program.  Next time I will have to type it to maintain consistent formating. 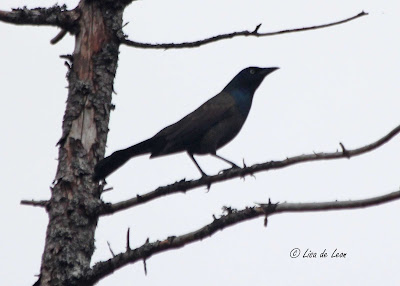 "Insectivorous (a.k.a. Insect-Eating, Insectivore (noun)
(adjective) Describes a diet that consists primarily of insects, including aquatic insects, ants and spiders. Many birds have at least a partially insectivorous diet, and insects are a critical source of protein for many growing nestlings. While young birds are still dependent on their parents for food, they may be fed mostly insects, even if their mature diet will be much different. To be considered insectivorous, a bird does not necessarily need a diet of exclusively insects, but the insect proportion is quite significant.
Granivorous  (a.k.a Seed-Eating, Granivore (noun)
(adjective) Describes a diet that consists primarily, though not exclusively, of seeds and grain. This is the primary diet for many types of birds, especially game birds, sparrows and finches. Granivorous birds can also eat other things, and many species will consume insects as a source of protein for growing chicks during the nesting season.
Frugivorous             (a.k.a. Fruit-Eating, Frugivore (noun)
(adjective) Describes a diet that consists primarily (though not necessarily exclusively) of fruit, including tree fruits such as bananas, apples, pears and oranges as well as berries. Frugivorous birds often have specialized bills to help them eat fruit most efficiently by cutting through or removing the skin, husk or hull of preferred fruits."
Not all birds have so much variety in their diet as this family of birds.  In all likelihood, these Rusty Blackbirds located themselves close to water with plenty of insects as that is their primary diet while breeding and raising their young. As I report of other species in upcoming posts, I will share more of the diet information specific to those birds.
I thank Paul for sharing this info and invite anyone who would like to provide a bird report or share some information to consider this forum as a possible place to do that.