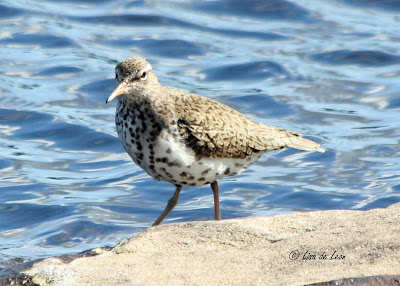 Right on schedule!  It was two years ago on the Victoria Day Weekend while walking around Long Pond that I saw my first Spotted Sandpiper.  It is funny how in the throws of a fading memory I can recall each and every time and place where I first saw a bird.  That is a testimony to the excitement of it. Much like historical events, when someone asks me where did you first see a particular bird, I know. 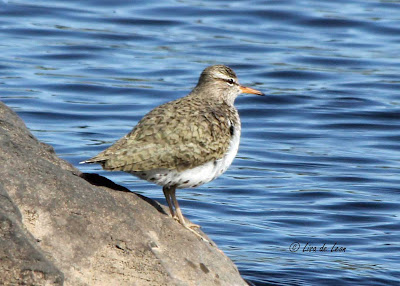 This year I saw my first shorebird, the Spotted Sandpiper, at Fourth Pond in Goulds.  I was taken with watching the swallows on a wire when I heard a clear "peet" come from over the water.  I looked quickly and saw two sandpipers flying toward me over the water. They landed briefly and took off again. 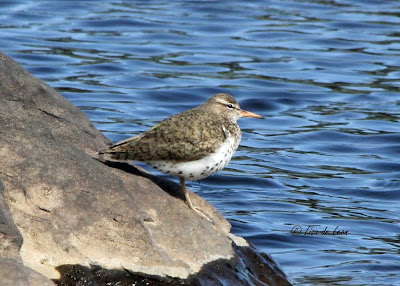 Following my usual route from Fourth Pond, on to Forest Pond and then Second Pond, I decided to walk the trail.  When I arrived at the marsh, I saw a sandpiper sitting on a rock and another flitting around. The fisherman perched on a nearby rock didn't seem to bother them at all. 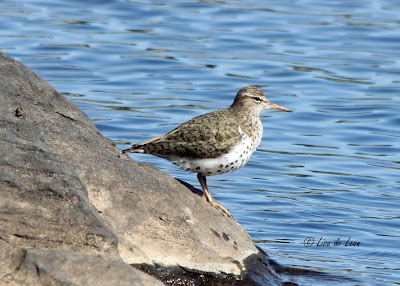 I worked my way toward them and was able to get fairly close. The sandpipers were fully in breeding plumage with the small round spots covering the breast and undersides.  This little bird often looks like it is about to lose its balance as it teeters up and down on a rock. My total Spotted Sandpipers for the day was four. Not a bad start.  Now, I am looking forward to the return of the Greater Yellowlegs to the St. John's area.
Posted by Lisa de Leon at 6:56 AM