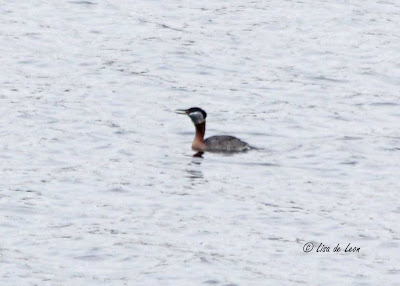 An uncommon visitor to our province, it is a special treat to see the Red-necked Grebe. I really don't expect to see one, they just pop up. Over my three years of birding experience, I have seen one down the Southern Shore, one in Harbour Grace, one in Torbay and Outer Cove and the most recent sighting included two at North River. 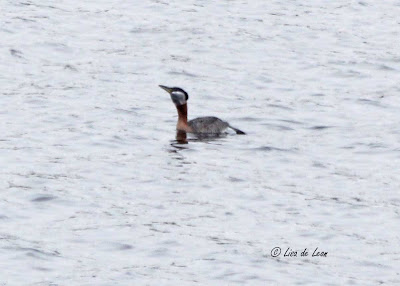 The first one we saw was this one, fairly close to shore.  It was clearly the best view I have had of this bird.  As we drove toward the end of the road, we spotted another. We parked and walked toward it, but it kept moving behind a bend in the shoreline and then disappeared. No picture of #2. 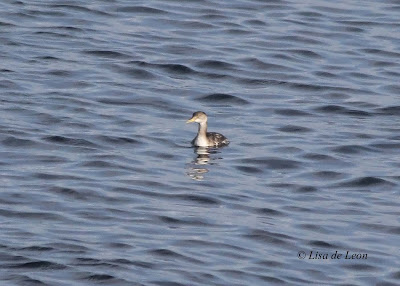 There was quite a difference in the Red-necked Grebe in its breeding plumage versus it winter plumage as seen in this picture taken in November. The shape is the same but the color is quite different. 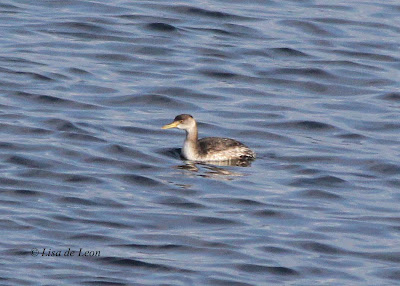 This bird has to get a running start on the water before it can lift off. It would have been nice to see that, but I can imagine it is quite similar to its cousin the Pied-billed Grebe. While watching a Pied-billed at Kent's Pond in 2010, I had a good opportunity to see it lift off.

Another interesting fact about this bird is that it ingests large amounts of its own feathers and even feeds them to their young. Throughout my reading, I could find no reason for this - it just is. ﻿
Posted by Lisa de Leon at 7:16 AM