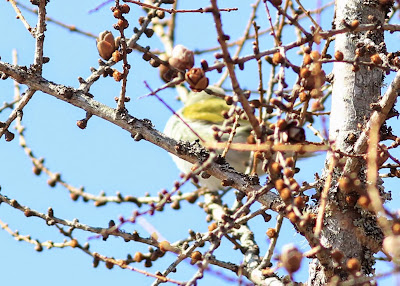 It would have been so easy to miss this Tennessee Warbler. Early morning last week, I was walking through Bidgood Park. 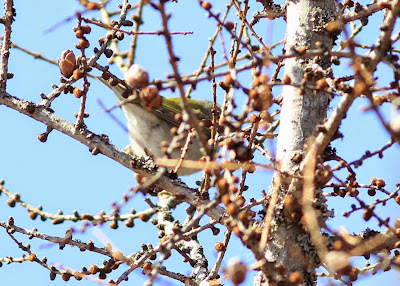 Just as I rounded a bend I caught sight of a small bird feeding behind a lot of twigs. It is so easy to become lackadaisical at this time of the year, thinking everything that moves is a common bird like a Yellow-rump, Ruby-crowned Kinglet, or a Northern Waterthrush. 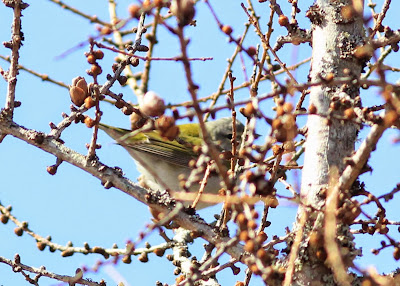 I froze in place and tried to get a good look at this bird that was clearly not one of the usual. It stayed with me for about three minutes, never once showing itself. 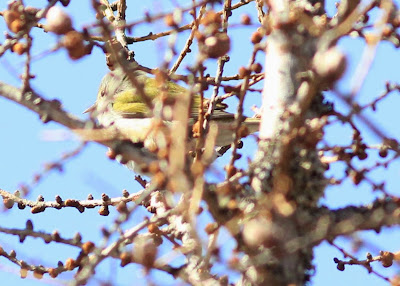 I did the best I could to get some shots to study later. I initially thought I might have a Blue-headed Vireo, but upon later scrutiny and two field guides, I finally determined my mystery bird was an unusual Tennessee Warbler. I think one has been spotted in this park before, but it was my first time to see one here. Actually, it is only the third Tennessee Warbler I have ever seen. It is always worth a pause to look over every bird carefully. You just never know what might be lurking behind the next corner.
Posted by Lisa de Leon at 7:44 AM