Yellow-breasted Chat is a Pleaser 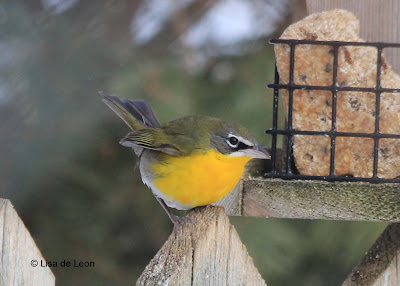 For more than a month, the Yellow-breasted Chat, first found by Alvan Buckley, has been attracting many birders to the upper Rennie's River Trail. Residents in the area have been extremely accommodating by keeping the bird well fed and showing extreme tolerance for the steady stream of birders standing just outside their fences. 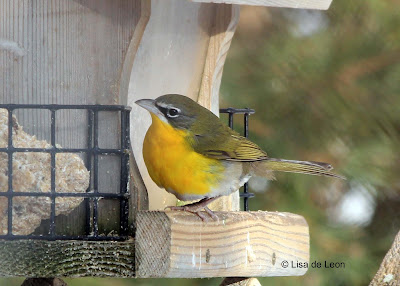 In the early days of its known existence, it could take hours of standing around to get a glimpse of the chat. The weather was warmer then, making that a comfortable experience. 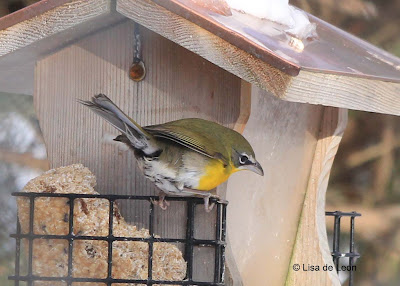 Now the "deep freeze" has set in; and thank goodness, the chat has been showing itself more readily. 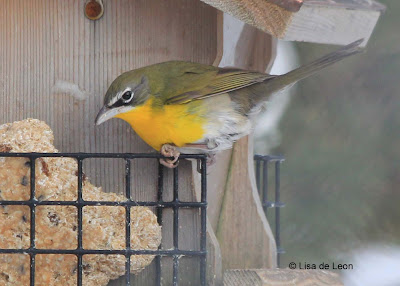 Yesterday morning, I arrived in the area around 8 a.m. and walked the distance between four houses several times looking for the glowing yellow breast. Twenty minutes passed and nothing. My feet were getting numb and my hands had passed the point of comfort. Where was this bird? The latest report was that the chat was making intermittent visits to the feeder about every 15 minutes. 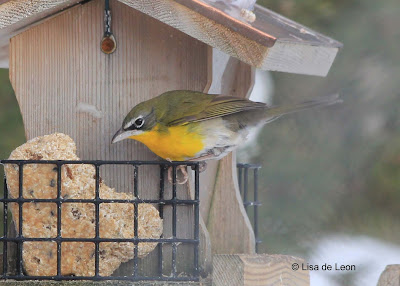 I kept fighting through the discomfort, hoping that it would put in an appearance. Then, without fanfare, it peeped out of a shrub. It is hard to miss this guy"?" (female and male Yellow-breasted Chats look the same) with its vibrant yellow breast. (I think this bird is actually getting even more yellow as time goes by.) 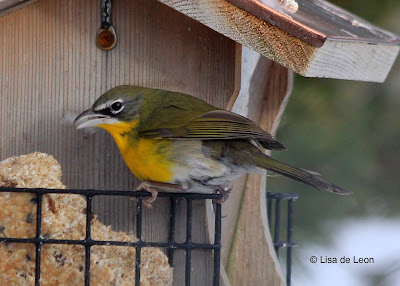 At last, I was in the game! I watched and waited.  I was no longer focused on how uncomfortable I was, but was captivated by every move of this bird. 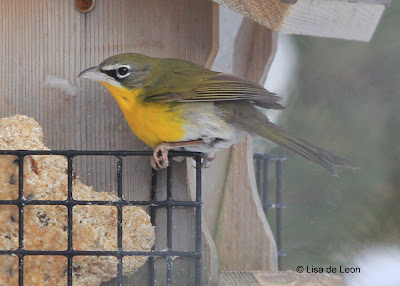 It then made its first move to the feeder. Wow! I saw the whole bird in all its splendor. I took lots of pictures and had some lovely poses. However, because I was shooting through a chain link fence, many of the images were soft as the crisscrossed wires became part of the picture. 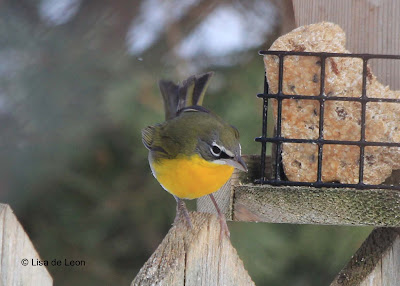 Periodically, the chat would fly from the suet to the shrub and back again. This went on for over 30 minutes. I had so many chances to photograph this bird that I even piled up some snow in an effort to make a mound that would raise me above the fence. I wasn't able to build it high enough with my weakened hands. 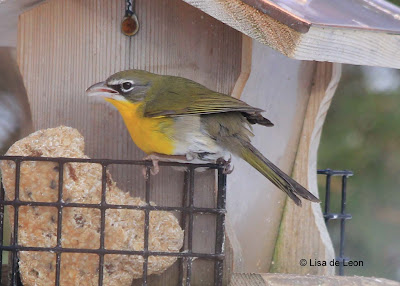 So, I had to settle for what pictures I could get through the fence. This time, the chat outlasted me. It was still going back and forth for more than half an hour when I decided I had to walk to the car while I still could. What a thrill to be able to enjoy this elusive bird in this way. Note:  So far, we have had the coldest January since 2003! What happened to that long-term forecast for a "mild" winter?