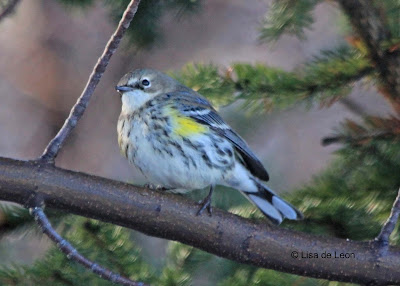 With postings of one warbler after another, you would think this is June, not January. This is warbler number six since the 1st of the month and number 11 since December 1st. I think this must be a record for St. John's. Are there more out there? 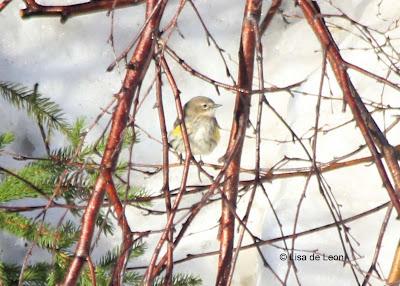 On Monday, I made a quick stop on the Southside on my trip to Cape Spear. There wasn't much activity, but I did see one junco. Where there is one bird, there are likely more. I stayed and watched. Looking across the Waterford River, I saw two glints shining in an evergreen tree. I figured they were both leftover ice from the storm, but then, I was very surprised to see one of them move. It was the Yellow-rumped Warbler. I watched it as it made short, frantic flights from one tree to another and from one branch to another. Its behaviour was not normal.

Over my shoulder, I heard a chickadee, then two. Birds were coming in. Were there any more warblers among them? I was torn between watching the bird I had or scouring the area for others. The YRW had my attention, and I stayed with it. I watched as the flew to the suet cakes hanging in the area. It tried many times to get a grip, but without success. This photo shows the one time it did land and was able to eat. Hopefully, it will continue to be successful and live on. It is remarkable it survived the very cold weather we had AND the blizzard. With the frigid dip in the temperature last night, it will be a struggle for this YRW, who seems to be the last of the warblers around town, to make it.