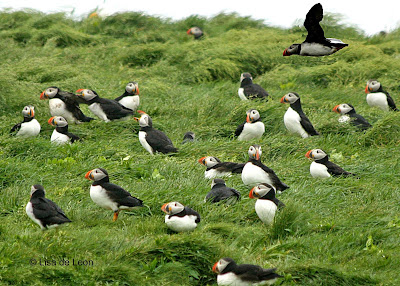 For some reason I began to wonder if I could name the provincial birds of Canada. Well, I knew the Atlantic Puffin was the Newfoundland Provincial Bird, and I knew the Blue Jay was the bird of PEI. That was it. I didn't know any more, so I decided to look into it. This is what I found:
Alberta - Great Horned Owl
British Columbia - Steller's Jay
Manitoba - Great Grey Owl
New Brunswick - Black-capped Chickadee
Newfoundland and Labrador - Puffin
Nova Scotia - Osprey
Ontario - Common Loon
Prince Edward Island - Blue Jay
Quebec - Snowy Owl
Saskatchewan - Sharp-tailed Grouse
Northwest Territories - Gryfalcon
Nunavut - Rock Ptarmigan
Yukon - Common Raven
My musings then began to move in another direction. What birds were regularly being sighted in each of these areas? It took me quite a while to locate a series of web sites that maintain regular reports like our NL Google Discussion Group.  Having looked at the sites for other provinces, I concluded ours is really the best reporting system on the go. Maybe there are others out there I am not aware of. I invite anyone who had a useful link to leave a comment directing us to any provincial reporting site.
Nova Scotia - http://groups.yahoo.com/group/NS-RBA/
Manitoba - http://groups.yahoo.com/group/Manitobabirds/
British Columbia - http://www.birding.bc.ca/
Saskatchewan - http://groups.yahoo.com/group/Saskbirds/
Quebec - http://bpqrarebirds.blogspot.ca/
Prince Edward Island - http://www.facebook.com/pages/Birding-on-PEI/157504117632145
New Brunswick - http://birdingnewbrunswick.ca/
Alberts - http://www.wildbirdgeneralstore.com/forum/
Ontario - http://outdoorontario.net/birds/phpBB/
Newfoundland - https://groups.google.com/forum/?hl=en&fromgroups#!forum/nf.birds
Yukon - http://www.camacdonald.com/birding/cayukon.htm
I have met a number of people from out-of-province that follow our google group regularly. I thought, perhaps, some from here might be interested in following other provincial birding activity.
﻿