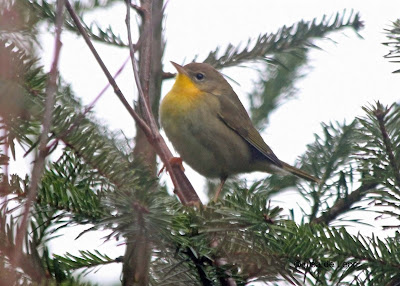 After two days of confinement due to the blizzard, I hit the pavement early yesterday and visited several known locations to pick up some Year birds. All in all, I was successful. Since I had missed the Fox Sparrow in Goulds, I decided to stop in at Kent's Pond on my way home to try to see the one reported there. 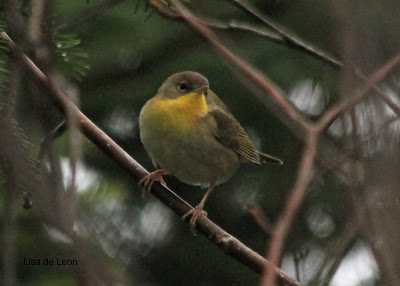 There was a bit of snow on the trail but not too bad. I eased my way into a good spot to view the known tree trunk where many people drop off seed on a daily basis. I caught a glimpse of the juncos flitting around when I arrived, then nothing. 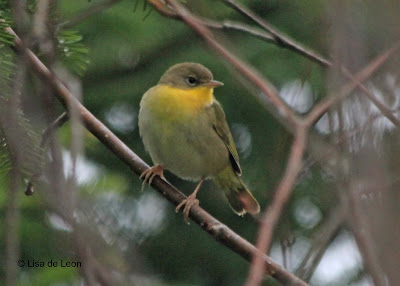 I stood and waited patiently, but nothing was coming in. I tried my squeeker and some low pishing. In came a Boreal and a Black-capped. That was a good sign. Then, I heard the Fox Sparrow. It finally showed itself about fifteen feet off the trail. I got a look, albiet not a good one. Working to try to get it to come out again, I was shocked to see a flash of yellow appear. 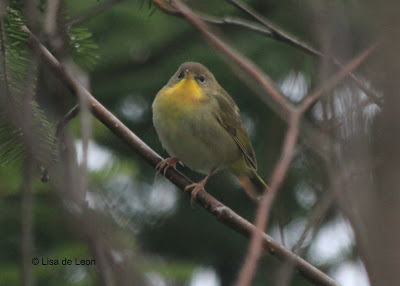 It was a warbler! A Common Yellowthroat! The biggest surprise of the day! It looked like a Common Yellowthroat, but it didn't behave like one. It flew in high and stayed out in the open for quite a while, moving from branch to branch and checking me out. Typically, this is a secretive little bird, that is known to stay around, but in low, thick brush. Often, I only get a glimpse of the Common Yellowthroat because it just won't come out. This one did! 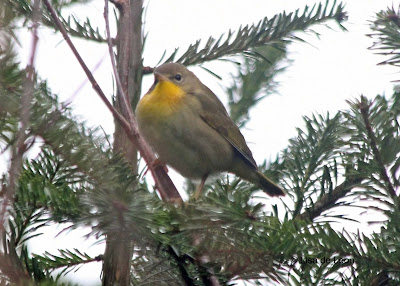 2013 is shaping up to be the Year of the Warbler. So far, I have seen five warblers (Townsend's, Orange-crowned, Pine, Yellow-breasted Chat and the Common Yellowthroat) and this is only January 14th. There was also a Yellow-rumped Warbler reported in St. John's this year. I missed that one. The weather today is not too bad, so I have to get out there to see what else I can find. ﻿
Posted by Lisa de Leon at 5:53 AM