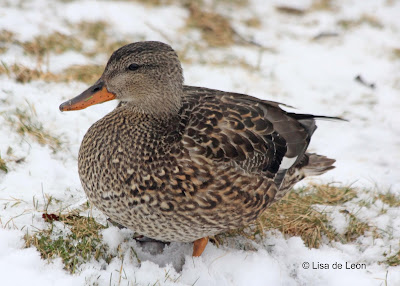 After two full days of interruptions cause by the blizzard, things are finally back to normal. On the first full day (Friday), we had no power for about 12 hours. Then, when electricity was restored, I still had no television, phone or Internet. This major inconvenience lasted until about 1 p.m. on Saturday when the phone and TV returned. Still no Internet! I was lost. There was no going anywhere to break the monotony because our entire street was drifted in and no plow arrived until about 8 p.m. last night. That was 48 hours of snow and rain that had turned the road into a slushy mire. There was no getting through it. The long and short of it is, I appreciate all these conveniences just a little bit more. This post of the Gadwall has been sitting on my computer for two days now, and here it is!
Well off course, this female Gadwell was first seen at QV Lake on January 8, located by Bruce Mactavish. I was at the lake early on the 9th, thinking I would see this rare visitor right away. One hour later, I gave up. There were four of us looking with no luck. 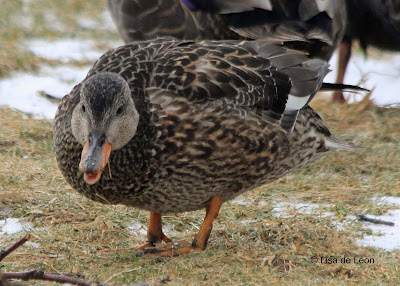 Before heading over to try to locate this bird, I looked at many pictures pictures of the Gadwall and thought I would recognize it right away. After looking at scores of American Black Ducks and Hybrid Mallards, I ended up thinking I wouldn't recognize the Gadwall if it walked over my feet. 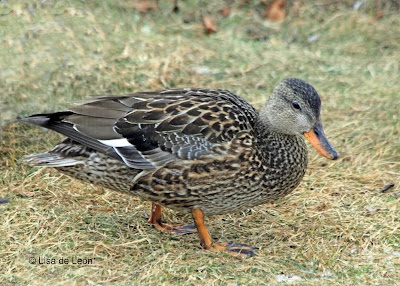 On Thursday morning before the storm, I headed down to the lake again in the hopes of seeing the reported Yellow-legged Gull. There were thousands of gulls on the ice, and it was impossible to scan them all. 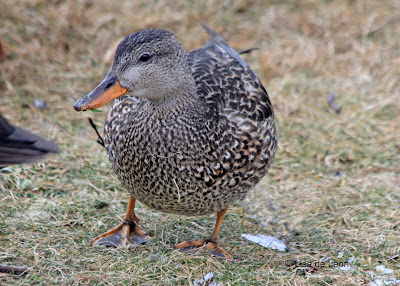 Checking over the ducks at the West end of the lake, I still didn't see the Gadwall. I really wondered if it had fallen victim to the roaming otter in the area. Thinking it may have moved to the Virginia River outflow to avoid the otter, I headed around the lake. 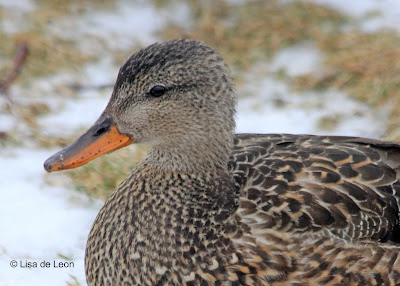 When I arrived, I found many black ducks and wigeons feeding on a grassy area near the gazebo. 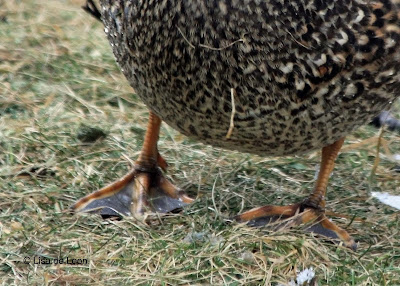 Taking it very slowly I moved into the gazebo to dodge the wind and to watch the ducks without disturbing them. Then, I spotted the different one, the one with the white wing patch, thin bill with a gray strip on top and orange sides. That had to be it! I watched it closely as my mind ran the list of field marks: Brown mottled color, white speculum, yellow feet, two-toned bill and roundish head. 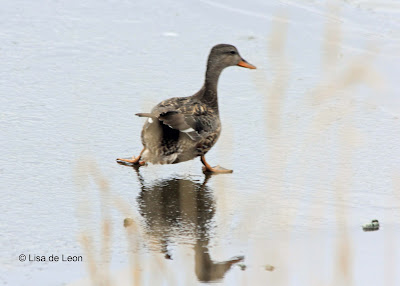 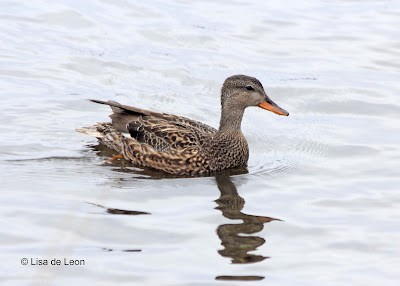 I wondered if I had been the first to locate this bird first, would I have even known it was a Gadwall? Probably not. It resembled the black ducks so much.  Only a little smaller in size, feet just a shade off the orange feet of the others, and size only a tad smaller than the Black Ducks. This diving duck could have easily gone undetected by me. 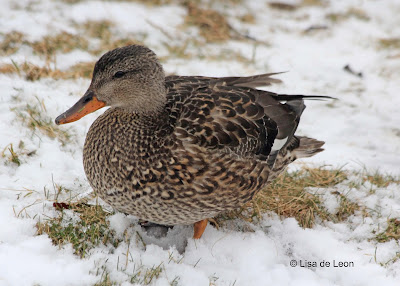 The longer I looked at it, the more distinct it became. I had seen two Gadwall before but never had the opportunity to study it as I did on that day. Now, that I have had such a great chance to view this bird, I really do think I will be able to pick one out of the crowd in the future, should the opportunity arrive again.
Posted by Lisa de Leon at 7:25 AM