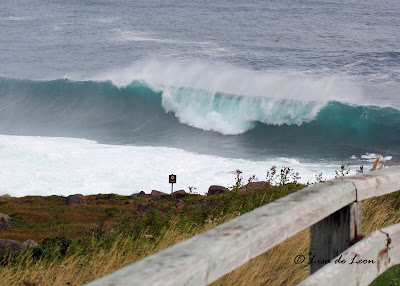 For my international readers I would like to introduce Cape Spear. It is the most north easterly point of North America and is a favorite tourist spot as well as a major draw for Newfoundlanders year around. Many come just to sit and look out to sea, others come to watch the swell of the ocean and the waves crashing against the rocks. It is usually possible to see fishing boats, container ships, cruise liners, supply ships and sail boats moving in and out of the St. John's Harbour from the lookouts. There are times when whales fill the water,  icebergs drift into shore and sea birds gather to feed on plentiful capelin. 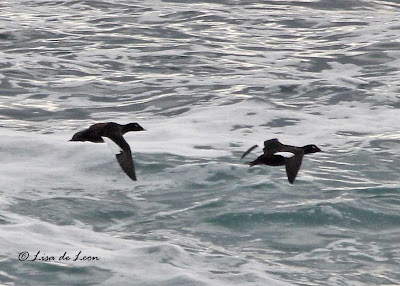 Birdwatchers frequent this venue all year round. In fact Cape Spear is "like a box of chocolates...." Sea birds fly by in abundance, sea ducks can often be seen in large rafts, kittiwakes nest on the shores, shorebirds dance on the rocks, and sparrows inhabit the low grassy areas of the hillside. Snow Buntings show up in the fall as well as other vagrant birds that stopover.  The road to Cape Spear and the East Coast Trail also welcome warblers, thrushes, orioles, and so much more. I'm sure that a list of all the birds sighted at Cape Spear and surrounding area would be very lengthy. 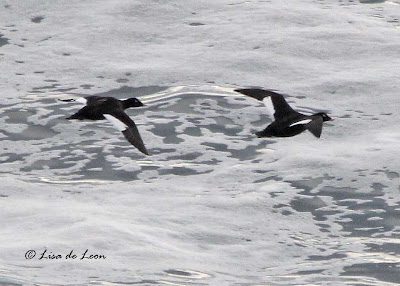 On September 8, 2011 I was standing in the lower lookout talking to a tourist who had come to see a Black-legged Kittiwake. All of a sudden we spotted two dark birds in the distance but by the time he redirected his scope, the birds had gone.

We remained looking out to sea watching the Northern Gannets' powerful dives into the water when all of a sudden two White-winged Scoters headed our way from the distance. 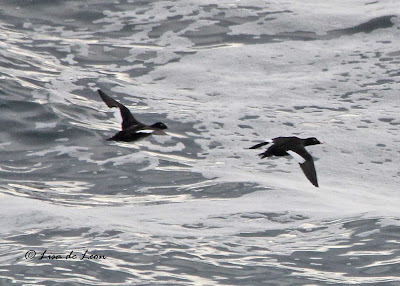 I got a good look with my binoculars when I realized they were going to give us a very close fly-by. I was able to get these three pictures as they flew quite close to the lookout. This was without question my best look at this sea duck.  We should be seeing more of these birds as this species winters in the waters around Newfoundland.

While Cape Spear is often a very busy place, there are those rare times when I have happened out to the cape to be the only one there able to drink in all of the magnificence of nature without distraction.

Oh, yes... I forgot to mention the wind. It is usually on the really windy days when I find myself there alone. The reason is obvious...the wind in this area can knock you off your feet!
Posted by Lisa de Leon at 7:29 AM