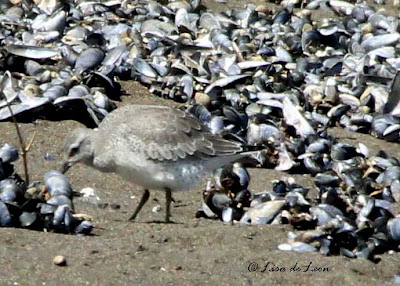 As mentioned yesterday the long hike to the mussel bed at Bellevue Beach proved to be well worth it. I saw yet another new bird and I really wasn't expecting to see this one.

While scanning the beach with my binoculars, I spotted three different birds on the outer edge of the bed. I couldn't discern much detail so I took a couple of pictures in the hope that I could enlarge them at home enough to identify them. That proved to be the case. They turned out to be Red Knots in their Winter plumage. 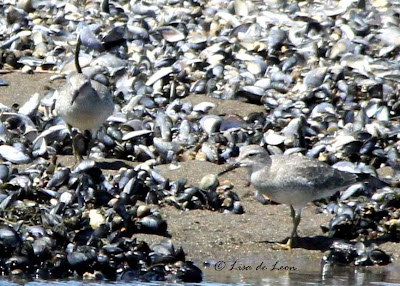 Red Knots, while uncommon in Newfoundland, have been spotted in several different locations this year including Renews and Spaniard's Bay. The time to see them here is during migration. Its feathers create a series of large scales on its back and sides. That was my first clue to identifying this bird and with confirmation from an experienced birder, I was once again excited that I had been able to ID yet another new bird. 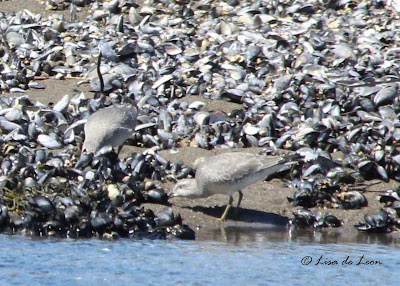 It would be much easier if each bird had a name tag! Each season brings in a different batch of birds and I find myself pouring over the books. Last year it was mostly warblers that consumed my time. While there didn't seem to be so many warblers this year (at least I didn't find many), I was able to get out to see a whole new collection of shorebirds. I also realize that this year I have gained more knowledge and experience over last year. That is really encouraging. With time, I will indeed build a bank of info that will enrich the birding experience. 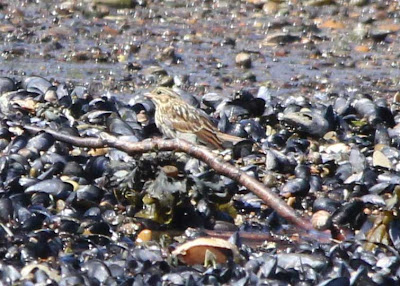 I have included a picture of a sparrow here which I have named a Bellevue Sparrow. I looked up all sparrows and the closest I could get to identifying this sparrow is that perhaps it is a juvenile Savannah Sparrow but there is nothing like it in any of the resources that I checked. It has quite a lot of white on the back and the facial markings also are different. Until I hear differently, this is my new species: The Bellevue Sparrow:)
Posted by Lisa de Leon at 6:58 AM