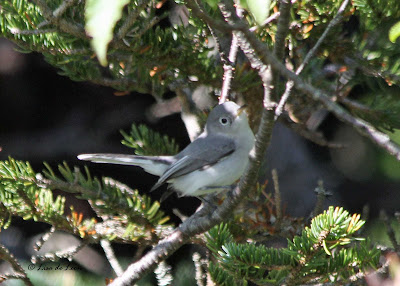 I have been trying to post pictures of birds in the order in which I shot them but this experience was just too rich to sit on.

On Sunday last,  Margie Macmillan and I set out to do some local birding to include Cape Spear and Goulds. It was an absolutely beautiful Sunday morning. This was double edged because while it was great for us to be out enjoying the warmth and the light breeze, there were hundreds of others who had the same idea....enjoy the outdoors (not birding.) 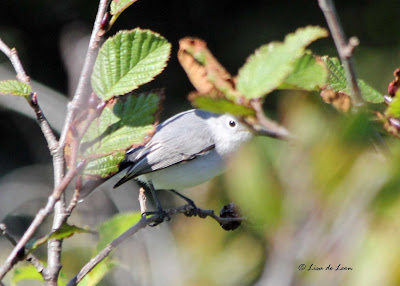 On the way out to Cape Spear we found several pockets of many, many birds.  Everywhere we stopped and pished, the birds came to us in abundance!  Wow!  What a day!

We worked our way to the last hill before the Cape and began walking the road to look for small birds. There were birds alright, but the car after car after car that rushed by created a never-ending roar of rubber on pavement and kind of dampened the purity of the experience. 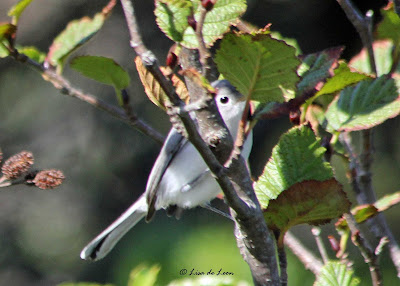 Shortly after we began working this section of the road, Terry James showed up and reported that he had just seen the Blue-gray Gnatcatcher up the East Coast Trail. In a flash we were in the car driving to the parking lot. Well, we weren't quite so speedy hiking up the trail but we did make it to the marker that Terry had left along side the trail. 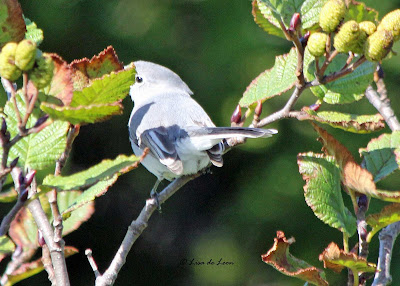 The area was filled with birds, especially Yellow-rumped Warblers!  Soon after we arrived I saw a Baltimore Oriole, Blackpoll Warbler, several sparrows and more and more Yellow-rumped Warblers. There was no gnatcatcher. So, we decided on a strategy on how to find this bird. First, we would just sit in nature's lap and wait quietly to see if it might come out to greet us. An hour passed and there was no gnatcatcher. 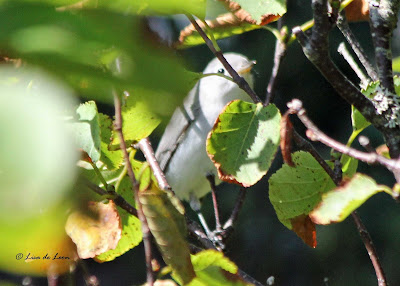 Strategy #2:  We decided to walk all along the tree line back and forth on the trail in that area. No gnatcatcher!

Strategy #3: Two hours into our search we decided to sit on the flat rock on the hillside and do some gentle pishing. Mind you, we were not up on this hillside alone. Many hikers, children and dogs were sharing the space. Many would stop and talk and many wondered what in the world we were doing. At one point we thought we heard the gnatcatcher's distinct call down in the valley. That was enough to keep us hanging on. 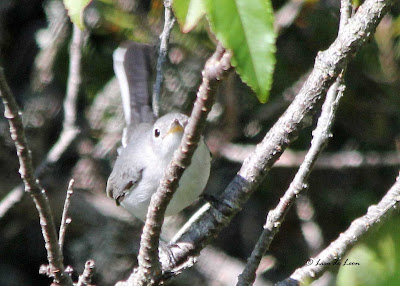 Strategy #4: Step up the pishing. The morning had turned to afternoon and even the Yellow-rumped Warblers were infrequent.

Strategy #5, our last strategy:  We were going to go so we decided to throw caution to the wind and pish like crazy with a mix of chips, kissing sounds and typical, but loud pishing! We were all out! Then, in a flash in flew many YR Warblers AND the Blue-gray Gnatcatcher! 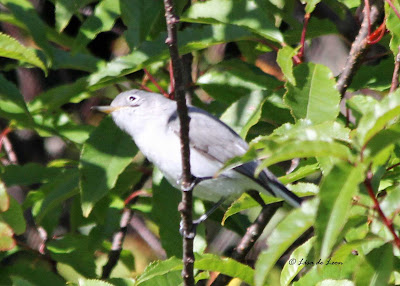 This series of pictures shows what we then had to contend with. It never stayed in one place for more than a few seconds; it was in constant motion flying around and pumping its tail. It played a game of peekaboo and hardly ever totally came out in the open. It was in the sun, it was in the shade, it was behind branches and leaves and we were excited. Margie was working to get good looks with her binoculars and I was scrambling to get into a place where I could see it and photograph it. The energy expended by us and by the gnatcatcher during the next five minutes was exhilarating. 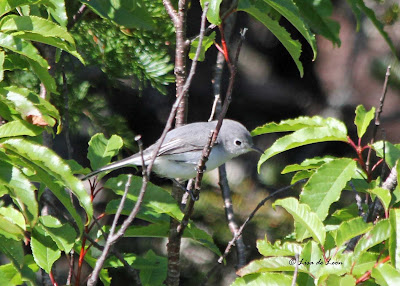 As luck would have it, not a single hiker passed on the trail during those precious few minutes. Then, just as quickly as it came in, it disappeared again. We looked at each other in total disbelief.

We spent three and one half hours in pursuit of this rare vagrant to Newfoundland and it paid off in a big way. This is a birding experience at its finest. A beautiful day, open-ended time, anticipation and at last a look at a very special new bird for both of us.
With smiles and jubilation we headed down the trail feeling extremely satisfied!
Posted by Lisa de Leon at 7:27 AM