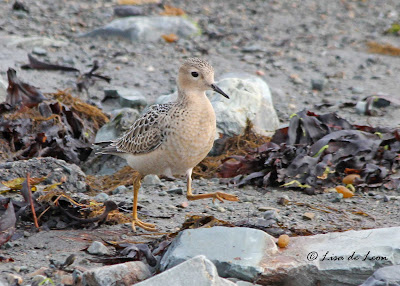 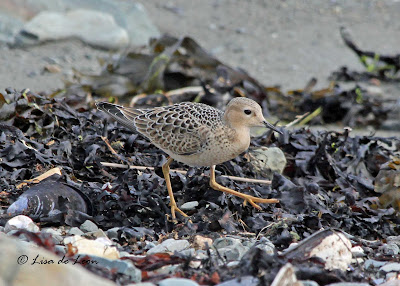 While song bird activity has been quite slow lately, the action on the beaches makes up for it.  On a quick birding trip to the Southern Shore, Catherine Barrett and I stopped at several small places along the way. We actually hit Cape Broyle twice with a stop on the way down and an "after-thought" stop on the way back.

We drove past the first exit when we were heading home because we were really doing a "speed" birding trip but for fear of missing something good, we made the second turn and went back to Cape Broyle Beach. 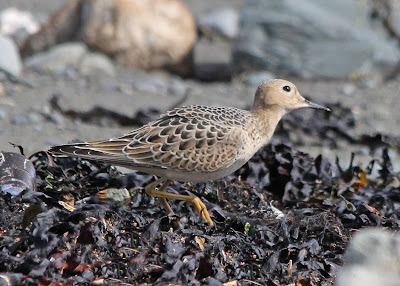 We got out and had a cursory look and didn't see anything different, but then just as we were lowering our binoculars, out walked this great Buff-breasted Sandpiper. It was so distinctly different. Many small shorebirds can be very confusing to identify but this one looked like none other. Right away Catherine knew what it was.

It looked right at us and then went on about its business. It stayed on the beaching walking back and forth in front of us. It did seem to stay in the line of sea weed and didn't take to flight once. When it wanted to move away, it walked very quickly with its head bobbing back and forth. 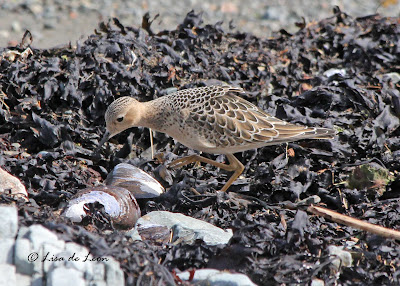 The feathers on this bird look like velvet. It is one of the prettiest little birds that I have seen and this was another first for me. This rare bird breeds in Alaska and the Western Canadian Arctic and rarely finds its way to Atlantic Canada.  Yet, several have been reported this year.  These birds nest on the ground and are often seen in grassy areas which leads to its nick name, "grasspiper." 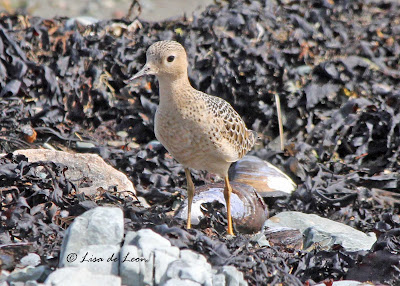 Three days later I found myself in the same area with another birder and we "refound" the Buff-breasted Sandpiper in the same area. Then later in the day we scanned the beach in Renews for shorebirds and much to our surprise, there was another Buff-breasted Sandpiper. A quad roared by and flushed all of the birds and the little "Buff" didn't return. On our drive home we stopped into Cape Broyle one last time and the "Buff" was gone from there. Is it possible that it was the same bird that had travelled the distance to Renews? Or, are there two of the lovely birds around? 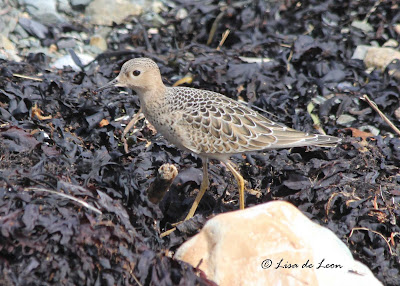 Without question, once having seen this bird, I will surely know it in the future as it is a real "stand out."
Posted by Lisa de Leon at 8:39 AM