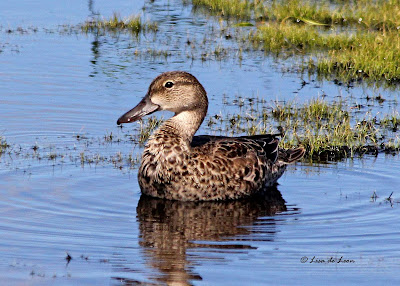 It was in November 2010 when I last saw a Blue-winged Teal at Mundy Pond. At that time I didn't realize how uncommon they are to the Avalon.

It was this week when I very unexpectedly came across two female Blue-winged Teal at Second Pond. I had gone to the area in search of the Pectoral Sandpiper and was very surprised when I rounded the bend at the lagoon to find these two and a Green-winged Teal. It was very interesting to see these two birds side-by-side. The size difference is significant. 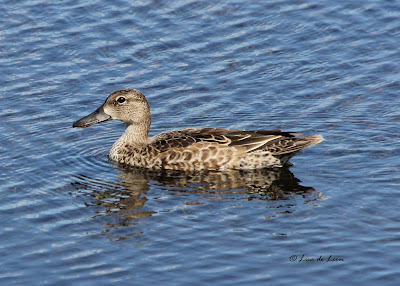 I also didn't remember last year's birds having such a distinct eye ring. One of these birds was much darker than the other and the light patch behind the beak was really prominent.

My sighting last year lasted for only a minute or so and I wasn't able to study the "look" of the bird. On this ocassion I had ample time to look them over really well. I was struck by the shape of the bill which is wider and more sturdy than I thought. On a return trip to the lagoon I saw them again and this time observed one of them preening. The blue wing was only visible during 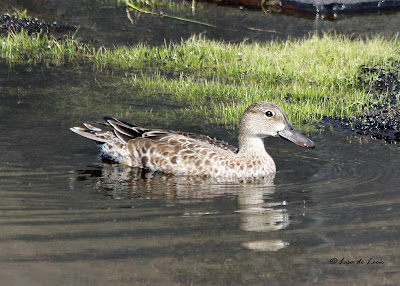 With hunting season in full swing I can only hope that these two great ducks make it to their southern destination safe and sound.

Afterword:  Word just came that two Blue-winged Teal were shot in the Goulds area. Pictures were viewed. It is most likely that it is these two birds as they are not commonly seen in this area.
Posted by Lisa de Leon at 9:14 AM