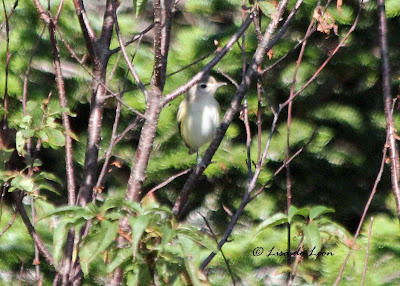 Yesterday morning dawned with sunshine and low winds. It was a perfect day to go back to Cape Spear and find the Black-throated Green Warbler that I have been searching for over the last month.

On the drive out to the Cape I spotted a bit of movement on a side road and quickly pulled off the road to take a look. It turned out to be about 40 birds flitting everywhere. They were mostly Yellow-rumped Warblers and sparrows. They began to move back in the woods, and I followed in the hopes of finding something different among them. A water covered trail made me turn back. I was sure that I had missed something good. 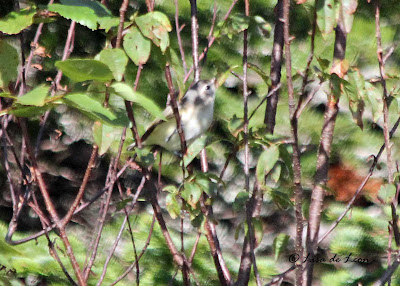 At yet another point on the drive out a bird flew across the road and I stopped. I was able to muster up about eight Yellow-rumped Warblers. I thought that this was going to be a very "birdy" day. Then I arrived at Cape Spear and parked my car to walk along the road. No birds! Nothing was stirring except a Northern Flicker, Blue Jays, Purple Finch and crows. I thought that I caught sight of a Northern Goshawk flying down behind the tree line. Maybe that was why there were no small birds around. I continued the uphill walk knowing that it was good for my health even if I didn't see any birds. 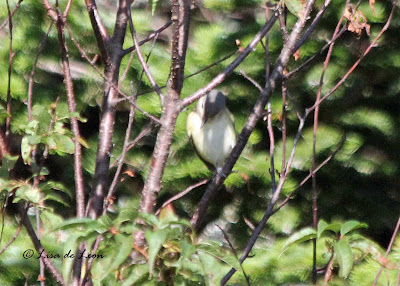 In less than ten minutes of walking, stopping and looking I caught sight of some movement and stopped again. There were four Yellow-rumped Warblers and then all of a sudden I saw a flash of white! All of my senses perked up and I raised my camera. I have often found that a little bird doesn't often offer the opportunity for me to look through my binoculars and then take pictures. It is a choice. In the moment I decided to raise my camera and start firing off as many shots at the bird as possible. I knew most of the pictures would be a total blur because the lens was struggling with the autofocus. 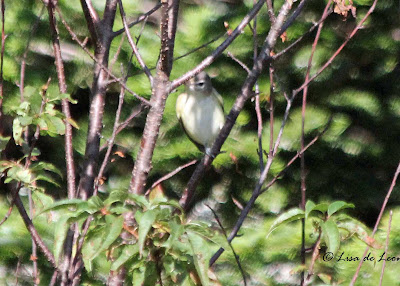 I could only tell that I had a vireo and I knew it wasn't a Red-eyed Vireo that I had seen earlier in the week. It was different. I had all of about three minutes before a car came roaring by and drove the bird into the woods. I waited patiently for it to come out again but I never saw it again. 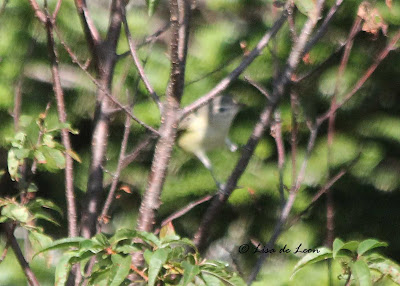 I could hardly wait to get back to the car, put on my glasses and try to see what I had but I decided to push on in search of that elusive Black-throated Green. I walked to the top of the hill and other than a Purple Finch and a Pine Grosbeak, I didn't see another bird on the trek up or the jaunt down. 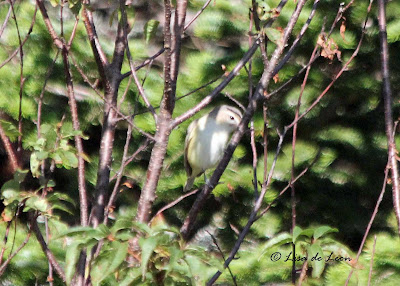 I got back to my car and began to flip through the pictures. I knew I had sufficient for identification but not much else. Only I could post such miserable shots and be happy about it.  The guide that I had in the car showed all North American Vireos. The pictures in that guide seem to clearly indicate that this was a Warbling Vireo. I felt pretty confident at that point about the ID. 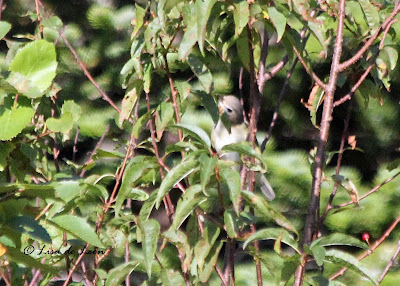 When I got home and opened all of my other guides and laid them all out side by side, I wasn't so sure anymore. Could this be a Philadelphia Vireo, a Blue-headed Vireo or a Warbling Vireo. My other guides didn't show any bird that looked like this. I then thought that it must be an immature bird and not fully "plumed."

I eagerly waited for the birders who were surely out for the day to go home so that I could ask for help with the ID. Late yesterday I got word that this is indeed a Warbling Vireo.

A birder from British Columbia found a Warbling Vireo on the road to Cape Spear on September 4th. I looked at his pictures that he posted and this bird does not look like the one he saw. Perhaps it is a new arrival brought in on the winds of the last two days.

I will try again to find my target bird but will surely keep my eyes open for everything else as this is the prime time for migrating birds to come to check out our North Atlantic island resort.

P.S. This bird is a rare vagrant to Newfoundland.
Posted by Lisa de Leon at 6:39 AM