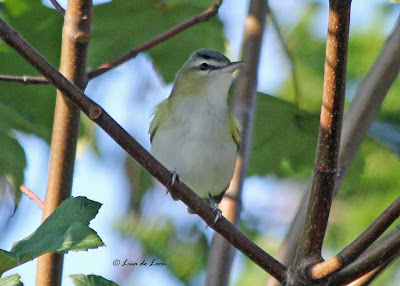 On most any given day in September there are a slew of birders standing on the side of the road going to Cape Spear. They are tucked in closely to the bushes with their backs to the road. I can only imagine that the tour guides speeding by in their filled buses must be thinking, "Oh no, I guess the bathrooms at the Cape are locked again." 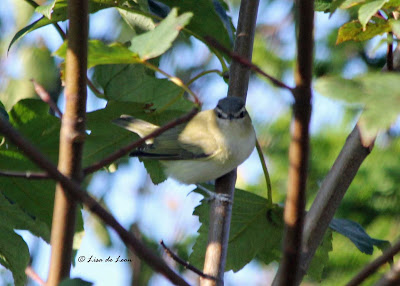 Over the last three weeks I have encountered seven birders who have told me that they just saw a Black-throated Green Warbler. I have been very focused on trying to see one of these birds this year and it seems that I have been "Johnny come lately" in every case. It was my intent on this day to work the road to Cape Spear until I found one. 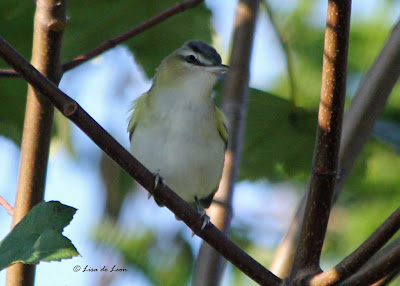 I began at the bottom of the hill and came across numerous sparrows and several Yellow-rumped Warblers. At least the birds were stirring. I moved slowly up the road where I noticed two small birds flitting low in the tree line. I eased over to the area hoping not to disturb the them, having no idea what they might be. 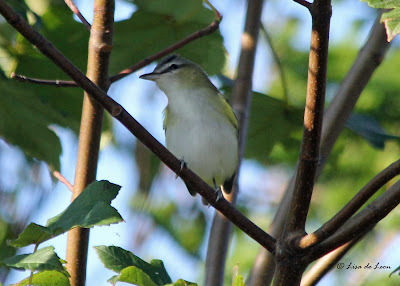 I watched them move through the alders and still couldn't see enough to get an ID. At last one popped out and sat on a branch in full view. Wow! This was my first up-close encounter with the Red-eyed Vireo. Even though I couldn't see the red eye, I was pretty sure that I was right with my identification. 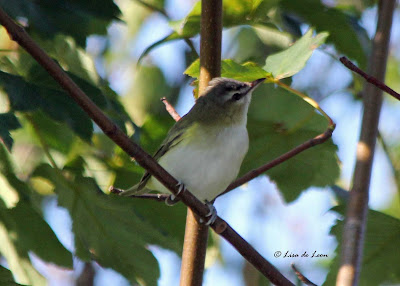 I watched and photographed it for about three minutes as it remained perched and looking around. What a prominent gray cap! In the beginning I thought that this bird was going to be very secretive and wary of me. Nevertheless, it proved me wrong. Once it was out in the open it didn't mind me at all. It did keep looking up. I expected it to move upward at any time but I was wrong. 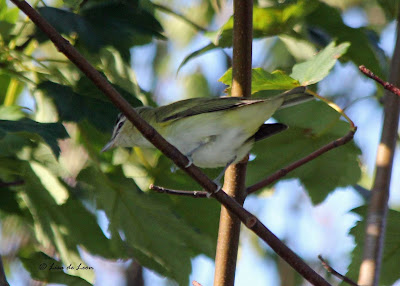 I was not surprised by its its facial markings but I was surprised by the soft lemon yellow color around the side of the neck, sides and under tail coverts. This little bird is about as perfect as they get. 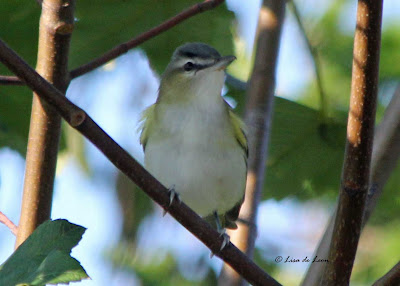 Since it looks like its eye is still brown rather than red and that it has pale yellow underparts, I think that this is a juvenile bird. It was really a special moment to find an uncommon little bird that was so pretty.

Now knowing what I was looking at, I could tell that the other little bird that was hopping around the alders was also a Red-eyed Vireo but it never came out. In a flash both were gone.

I hurried back to my car to compare my pictures with ones in my bird guide and was so pleased with the encounter and the ID.

Note:  On a return to Cape Spear two days ago, I saw one Red-eyed Vireo in the distance in one location and I think that was also the bird that we heard singing behind the treeline but could not sight it.   The Red-eyed Vireo winters in the tropics and should be moving on soon.
Posted by Lisa de Leon at 11:23 AM