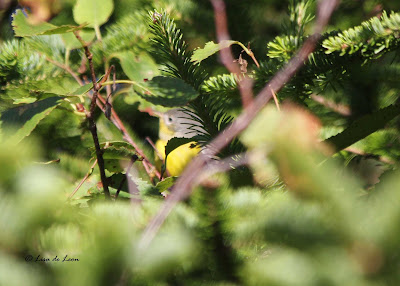 Birdwatching and identifying the birds that present themselves is not a snap. It takes curiosity, perseverance, study and help from those who know. If there are two traits most associated with birdwatchers they are the willingness to help with identification and to share sightings. Th 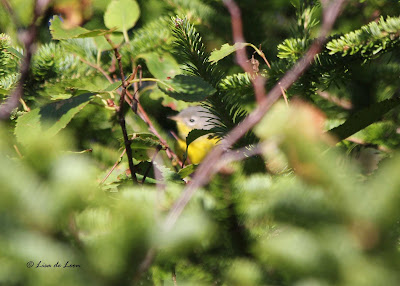 is is certainly true of the birdwatchers here in Newfoundland.

I chose to post a bird today that presented me with quite a challenge to identify. Help on this one came from three different birders. According to them, it was evident that the bird is an immature Magnolia Warbler, not to me.

Now, how did they come to that conclusion? I am using my very poor images that I was able to get of this little bird to share the process that I went through in order to come to the same conclusion on my own. You see, it is not good enough to get an ID from someone else and file the pictures. It is really important to understand how they determined the species. 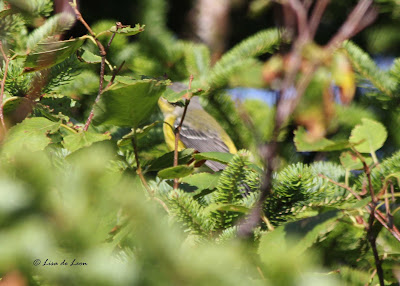 Here's how it all unfolded:  Another birder and I stopped on the side of the road heading out to Cape Spear. Small birds were everywhere including dozens of Yellow-rumped Warblers, Chickadees (both), Blackpoll Warblers and sparrows.  A movement low in an alder caught my eye. I moved to the area right away. The bird was staying put but very secretive. I pished a little and every now and then I would get a glimpse. This is when birding gets good. It stayed with me for about ten minutes and during that time I was able to get these four pictures that showed some detail of its plumage. 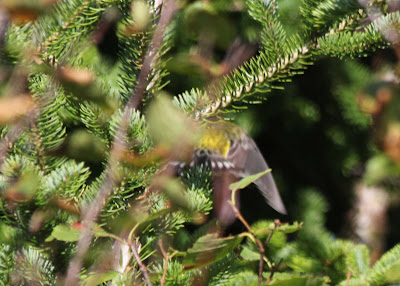 My first guess was that this was a Common Yellowthroat due to its behaviour and the bright yellow on its throat. Light and foliage can alter color and create strange effects when photographing the bird. I knew that I would need to be cognizant of that.

It was not until I was in the car flipping through the pictures on my camera that I realized that this couldn't be a Common Yellowthroat because its head was not olive green but gray. Now, I was confused.

Later in the day we bumped into two other birders who had a quick look and told me that this was an immature Magnolia Warbler. Well, this didn't look like any Magnolia that I had ever seen. To tell the truth I have seen less that five altogether but they were certainly more boldly marked than this one. I was troubled because I didn't recognize this little bird as a Magnolia. Time to hit the books!

From the pictures this is what I had to go on: 1) Bright yellow throat and breast 2) Gray head 3) Faint streaking on the yellow breast 4) Eye ring 5) Olive back 6) Two wing bars 7) Yellow rump and finally 8) White band across the tail.

The first thing I did was look for pictures in my five bird guides to find one that matched. None did. I, then, looked at the Confusing Fall Warblers pages of my guides for something that matched. None did. The head of the Magnolia in the guide did not "look" gray but rather olive green. Having two "air balls" already, I had to begin to read. When reading about the identifying features of several fall warblers, it then became evident that the only bird that had all eight elements of the plumage as shown in my pictures was the immature Magnolia Warbler. Home Run! At last I could see it for myself and not be totally reliant on others when I see this bird again.

As poor as the quality of the above pictures is, they were good enough to provide me with all that I needed to identify the bird. It is always a good idea of have a camera, any camera, handy to capture the details of a bird. For me these images provided the foundation for me to really learn about a secretive little bird that could have gotten away with absolutely no ID.
Posted by Lisa de Leon at 11:22 AM